Zombie School is the fortieth book in the Give Yourself Goosebumps gamebook series. It was published in 1999.

The cover artwork shows a zombified student in a school cafeteria. He has pale, corpse-blue skin, and is drooling. The tray he is carrying has macaroni, green beans, a cornbread muffin, and a milk carton.

Great news! You just got into the best boarding school in the country! But on your very first day you start to get totally creeped out.

The students walk around chanting things like "Work. Don’t play!" And they all have strange glassy-eyed stares. Better choose your schedule wisely. If you take Gym, one slipup on the rope-climbing test and you’ll be washing dishes for the rest of eternity. If you take Science, you might end up with a transmitter implanted in your arm that has you acting like a real zombie!

You are transferred to an exclusive boarding school in Nevada, where all of the children are very quiet. During homeroom, your teacher, Miss Simms warns that any student breaking the rules will be given demerits and sent to the Detention Wing, where the school makes an example of "bad" students. One such student enters the room and you are shocked to see that he looks like a zombie. While Miss Simms is out of the room, you steal the monocle she wears, but discover that when you look through it there are hidden brainwashing messages all over the walls and many more of the students look like zombies. The reader must then decide whether or not to put back the monocle before the teacher notices it's missing.

You put the monocle back, but what you've seen is enough to convince you that something is seriously wrong at the school. The story focuses on your efforts to escape from the school and/or alert the authorities, as the zombies start to close in on you.

You keep the monocle. Before Miss Simms can find out who took it, the bell rings and it's time for class. You pick from a list of classes and have to survive them. This storyline is similar to the setup found in Shop Till You Drop...Dead! and You're Plant Food!.

You end up in the forest with the "Runaways", a group of other kids who have escaped from Ranewash School. You must then help them decide what to do in order to destroy the school. This storyline can be reached through either Story A or Story B.

There are twenty bad endings and five good endings. 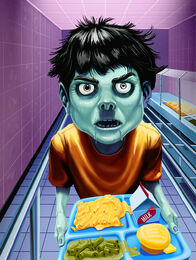 Retrieved from "https://goosebumps.fandom.com/wiki/Zombie_School?oldid=112829"
Community content is available under CC-BY-SA unless otherwise noted.