Goosebumps Wiki
Register
Don't have an account?
Sign In
in: Books, Goosebumps Most Wanted, Halloween,
and 13 more

The 12 Screams of Christmas
Zombie Halloween is the first book in the Goosebumps Most Wanted: Special Edition sub-series. It was published in 2014.

What Happens to This House on Halloween?

Kenny Manzetti was the new kid in town. His family moved back in to an old house to help take care of his grandfather. Everyone in his new neighborhood is obsessed with zombies--even Grandpa Mo. But then a new family moves in next door and their choice in furniture is...interesting.

Kenny is convinced that there is something strange about the new neighbors, but his parents won't listen to him. So Kenny and his friends go in for a closer look. A bad idea on any day, but definitely the wrong choice around Halloween. Will Kenny survive long enough to go trick or treating?

Mario Manzetti has just moved to Franklin Village, and he hates his new home, an old building that's across the street from a graveyard. However, Mario commits to being more positive for his mother's sake; life hasn't been easy for her since Mario's father left to fight in World War II.

Mario and his new friend, Ivy, go exploring the cemetery, and they're scared by Anthony, Mario's younger brother. In the graveyard, Mario experiences strange occurrences, such as mysterious voices and unknown forces pushing him. The kids end up back at Mario's house. Evidently, Mrs. Manzetti has left for work. The kids explore the building and find a trapdoor in the basement floor, which they open and climb inside. To their horror, the kids see a group of zombies. Suddenly, Mario hears his mother come home. He and his brother rush back upstairs as quickly as possible to warn her. She says that — while she had heard rumors about the undead — she didn't believe there were zombies. The trio rushes down to the trapdoor and reopen it. A haggard, noseless, and undead Ivy jumps out at them. Ivy swears that Mario will never escape her.

Kenny Manzetti doesn't like his new home in Franklin Village. It's across the street from a graveyard, which he hates. Kenny and his twin sister, Tricia, were forced to move in with their Grandpa Mo by their parents. Grandpa Mo, a frail old man who loves to tell zombie stories, is too sickly to live alone. As a new family moves into the house next door, Kenny and Tricia begin planning their Halloween party with the help of their friend, Alec Schwartzman. The kids discuss the possibility of a zombie party, but they're distracted when the movers next door remove three coffins from a van and bring them inside the house next door.

The kids tell Grandpa Mo, and he suggests that the new family is a group of zombies who are hiding inside the coffins. The kids go and knock on their neighbors' door, hoping to get a peak inside. However, the pale boy who greets them, Trevor, doesn't let them in. The kids return home. Eventually, they see a news report in which several teenagers report seeing zombies. Kenny decides that he should start a team dedicated to hunting zombies. He doesn't really expect to find any zombies, but he thinks it'd be a good way to get attention and meet new kids.

One night, Kenny is in his room. He looks outside and sees a pale figure moving through the cemetery. Suddenly, Kenny recognizes the figure as Grandpa Mo. Kenny gets his father, and the duo rushes outside to retrieve the old man. When Grandpa Mo reenters the house, he said he dreamed that zombies dragged him outside. The following night, Kenny's zombie patrol meets up for the first time, and they venture into the graveyard near Kenny's house. Kenny and Alec quickly become separated from the other boys in their group. The duo finds Trevor wandering about the graves, but he says he's simply out for a walk. After he leaves, Kenny and Alec are attacked by a dog, but they use candy to distract it for enough time to escape. Once home, Kenny receives a message saying that the other members of the club got scared and went home.

Late at night, Kenny decides to sneak into his neighbors' house so he can find out if Grandpa Mo's theory is correct. Kenny enters through an unlocked door. He goes to the basement and spots three coffins, but Trevor walks in and is confused. Trevor allows Kenny to see what's in the coffins, revealing that they are just filled with books and clothes. Trevor says his parents had been the owners of a failed funeral parlor, and they were left with several unused coffins. Embarrassed, Kenny leaves.

The next night, Kenny's zombie patrol consists of only himself and Alec. The boys see several zombies surrounding Grandpa Mo in the cemetery. Kenny rushes into the graveyard and sees a tombstone with the name Mario Manzetti on it, and he tells Alec that the name belongs to his grandfather. Kenny assumes that his grandfather must secretly be a zombie. Kenny and Alec both go to their respective home. Kenny tells his parents that Grandpa Mo is out in the graveyard, but they won't listen to him about the zombies. Kenny goes to his room and some time passes. Suddenly, Grandpa Mo returns and says he can explain what Kenny saw earlier. Grandpa Mo reveals that he shared a name with his father, who died during World War II. Following his father's death, Grandpa Mo was haunted by dreams of zombies. Grandpa Mo reveals that the zombies in the graveyard let him go because he was so scrawny. Kenny's parents return home, and they're glad to see that Grandpa Mo is alright.

Halloween night comes, and Kenny can't even enjoy the party that's in his basement because he's frightened that real zombies might sneak in. Kenny moves a couch so Grandpa Mo will have a place to sit, but this reveals a trapdoor. The door springs open, and a zombie girl pops out and drags Kenny into the tunnel below. The undead girl, Ivy, insists that Kenny is Mario. Grandpa Mo enters the tunnel and explains that he is the real Mario. Ivy becomes distraught at seeing how old Mario is and figures he can't be the true Mario. Defeated, she stumbles away into the darkness, and the duo exits the tunnel.

Kenny forgets to cover the trapdoor, which lets a flood of zombies out. Remembering how they used candy to distract an attacking dog, Kenny and Alec use candy to coax the zombies back into the tunnel below, and the boys slide the couch back over the trapdoor. The partygoers look horrified, but Kenny plays off the whole ordeal as a prank done with the help of high school kids. Kids cheer and the party continues. Unexpectedly, Trevor and his parents appear at the entrance of the basement. Trevor states that he and his parents aren't zombies; they're vampires. The trio bear their fangs, and partygoers begin to panic.

The earliest pre-release version of this book's cover featured the text, "SPECIAL EDITION" underneath the Goosebumps Most Wanted logo. Additionally, the artwork appears slightly zoomed-in, and R.L. Stine's name was colored red instead of orange.

Prior to this book's official release, Scholastic distributed several uncorrected proof copies of the book. The proof's overall appearance is slightly different than the final version's in the following ways:

While the overall story remains largely unchanged, there are a few small wording changes throughout the book: 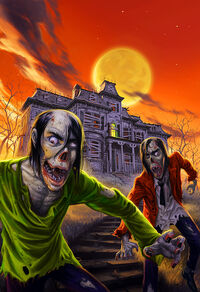