Shawn Potter
Zeke Matthews is a supporting character in the twenty-fourth Goosebumps book, Phantom of the Auditorium, as well as its television adaptation.

Zeke and his best friend, Brooke Rodgers attended Woods Mill Middle School and auditioned for a play that their teacher, Ms. Walker had arranged called The Phantom as they are both horror fans. Ms. Walker told them that the play was cursed, but Zeke and Brooke did not believe her and thought of it as a joke. They also heard rumors of a phantom haunting their school, but no one had ever seen him. Zeke and his friends only knew that he had been haunting Woods Mill Middle School for more than seventy years.

Zeke got the role of The Phantom, but soon mysterious accidents started happened which made people believe that it was him, taking his role too seriously. Eventually it was discovered to actually be Emile, a homeless man living in the basement under the school was responsible for the accidents, as he wanted the kids to stay away from his home. After he was taken care of, the show was back on. On the night of the play, Zeke was knocked out, and the real Phantom took his place. He revealed that he is indeed real and had been waiting for the play to be performed so he could finally do his dream role.

After getting his chance, he fell down the trapdoor and vanished once again. Zeke came to and the kids found a yearbook for the year the play originally was put on. There they discovered the boy who was cast as the phantom: Brian Colson, a boy they had some time met earlier and started hanging out with.

Zeke is the son of HorrorTown's mayor, Louise Johnson, who is currently in college. One day he visited her, which made her happy as she was in a funk at the time due to her decline in popularity with the citizens. He met up with Brooke Bruchenberg, who had actually meet before during a previous visit. He signed up for the community play, Phantom of the Auditorium, and got the role The Phantom while Brooke got the role of Esmeralda. He started to play a few pranks during rehearsals, so when weird accidents started happening, people assumed it was his doing. However, it was actually an unknown figure dressed as a phantom. The Phantom trapped him but Zeke managed to escape.

At the same time, his mother's frustrations with her reputation hit a low and she seemed to find some hope when she discovered a genie named Jenna in a soda cane. She wished that she could protect the town and Jenna gave her a big crab-like machine which she ended up going on a rampage with. To Zeke's dismay, his mother was arrested and her position as mayor was revoked.

Zeke is twelve years old, Caucasian, tall and thin with blond hair and a couple of freckles. In HorrorTown, he's now an African American boy with a red shirt and green jacket with a small beard.

Zeke is a highly excitable joker who is always looking for thrills and is a big fan of things to do with horror. He also likes to be the center of attention and he would tend to show off or play one of his jokes to get it. But Zeke can also be thoughtful and sometimes pretty tense. He also tries not to get on Ms. Walker's bad side, but he does like her too. He is very close to Brooke, often calling her "Brookie," and they have been friends for nine years. They know everything about each other. Zeke does tend to annoy Brooke sometimes, especially with his jokes, but they still get along as friends. Zeke also hates his freckles, even though people hardly notice them after a while and they disappear when he gets a tan. 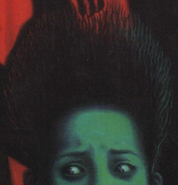 Zeke as depicted on the French cover of Phantom of the Auditorium.
Community content is available under CC-BY-SA unless otherwise noted.