Scott Pietrangelo
Zackie Beauchamp, referred to as Zack in the television episode, is the protagonist in the fifty-fifth Goosebumps book, The Blob That Ate Everyone. He is also the best friend of both Alex Iarocci and Adam Levin.

In his hometown of Norwood Village with his two best friends Adam and Alex, Zackie wrote horror stories in the hopes of becoming a famous horror writer. One day, he found a wrecked store that was hit by lightning the previous night, where he gets a shock by a typewriter that he takes home.

He started writing a story about a blob monster, when the things that he type start happening in real life, including Adam showing up on Zackie's front porch. He doesn't find Zackie's stories by be scary and always makes fun of him, and assumed they were trying to pull a fast one on him. After a scare in the basement, they wrote off the events of the night as just coincidences.

After Adam pulls a mean prank at the grocery store, Zack writes his blob monsters in a furious state of anger. Soon, the Blob Monster came to life and started rampaging and eating people, including his best friend Adam. After failing to use the typewriting to get rid of the blob, Zackie realized his powers come from him, not the typewriting. He used his powers to get rid of the blob, and bring Adam back.

Zackie really likes to write horror stories and he has a lot of pride in them. And he always likes to read them out to his friends. Zackie would like to be a famous horror writer when he grows up. He is close to Alex and Adam, although he really dislikes it when his best male friend Adam criticizes his stories and how he, Annie and Emmy always tease him and play tricks on him to make Zackie scared. But Zackie can see that Adam is really a good guy at heart.

Eeven though he writes horror stories, Zackie is actually scared of a lot of things himself, such as the dark and going to the basement when he is alone in the house. He told Alex some of his fears, but not all of them, as to Zackie, some of them are very embarrassing. He reckons that he writes horror stories because he knows what being scared feels like. It never stopped him from writing the stories and he likes doing it.

He was going to appear in the Goosebumps Presents version of the story, but it was never released.

TV version of Zackie with his best female friend Alex.

Zack watches and runs away while Adam, his best male friend, is being eaten by The Blob, his creation. 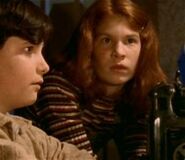