Scaredy Cat (by Hannah)
Zacharious (once by Champ)

Zach and his mother Gale have recently moved to the town of Madison from their old home in New York; something he did not particularly have any love for. They moved down to Madison, Delaware because his mother had recently taken up the position of assistant principal at the high school. As they came to their new home, Zach and his mom met his Aunt Lorraine who was very happy to greet her sister and nephew. Zach was given a New York ball cap with rhinestones on it by his aunt, which he had a disliking of. He decided to go back outside and help bring in some more boxes from their car. It's then he met the girl next door, Hannah, and he took an instant liking towards her. She seemed to take a liking to Zach too, but is quickly called by her mysterious father. Who even warned Zach to not see his daughter again and to remain on his side of the fence.

The next day, Zach went to his first day of school in Madison and there was an assembly to welcome his mom as the new assistant principal. There he meets Champ, who he finds to be odd, but he soon becomes Zach's first friend in Madison. Back at home, he meets back up with Hannah, who seemed to startle him. He comments that she was not at school today, which she seemed to like that Zach noticed that, but she has to say that she is home schooled. Later that night, Hannah invites Zach to sneak out with her to an old amusement park that has to be shutdown. She encourages him to climb up on the old Ferris Wheel and they get a first hand and wonderful view of all of Madison. As they returned home, Zach seemed to have an even bigger interest in her and in his own way, asked her out on a date. Again her father appeared and gave him another warning to stay away from them.

Now in his room doing his homework, Zach overhears Hannah and her father arguing. However when he hears Hannah begin to scream, he calls the police on Stine. They come to his house, but he bluffs his way out of an investigation and the thoughtless cops believe his story and Zach is left to look like a fool. After they left, Zach gets even more suspicious, so he fakes a call from the cops to lure Stine away and even asks Champ to come over and help him investigate Stine's house. Zach shows Champ that he can pick a lock and they enter Stine's house through his basement. After rummaging around the house, the two boys find a book shelf that has manuscripts to a bunch of the famed Goosebumps books. However they appear to have locks on them, which intrigues Champ. So a slightly irritated Zach finds a key and unlocks it for him. However soon Hannah surprises them with a baseball bat and Zach drops the book. The mystery is slightly cleared up, so he and Champ decide to leave her house. However before he does, he picks up the book, but also opens it by accident. It's then that the Abominable Snowman of Pasadena is brought to life for the first time.

Hannah takes it upon herself to get the monster back into its book, so she takes it and follows the monster. Zach along with a reluctant Champ follows her to an ice rink where the Abominable Snowman seems to have taken up residence. The three teens through a lengthy yet somewhat futile fight fail to get the monster back in its book. However thanks to R.L. Stine, who shows up, is able to get the monster back in its book. Stine then takes the kids home, but Zach begins to question Hannah's father's identity. He is the first to accuse her father of being R.L. Stine. He is proven to be correct when he starts accusing Stine of writing poor quality books and mimicking Stephen King. However Stine does reveal his identity after Zach's taunting infuriated him.

Back at Stine's house, Zach is given a full explanation as to how these monsters can come to life. Then he finally comes face to face with Slappy the Dummy. Slappy soon ran away with all the Goosebumps books, so Zach and everyone else quickly followed after. Although before they can, Zach and his friends are attacked by the Lawn Gnomes. They are able to dispense with them and make their escape through the basement and finally escape. Then they all notice that Slappy is burning all the books, so the monsters can't be sent back. However they all take it upon themselves to trap the monsters again, so they head towards town. In town, it is Zach who gives Stine the idea to trap all the monsters again in the pages of a book. It so happens to be in the high school, but on their way there, they were attacked by the invisible boy, Brent Green, Giant Prayimg Mantis monster. They all escape its onslaught and make it inside a local store, then they soon confront the Werewolf of Fever Swamp.

The monster proves to be a hazard towards them, but Zach is able to save Stine from it and they escape. Although it follows them outside to the parking lot and intends to finish them off, but they are saved by Zach's Aunt Lorraine. The group then has to go through a cemetery to get to the school. It's there that Zach learns Hannah is not real, but only a creation from Stine's imagination. The group however is attacked by The Graveyard Ghouls, so they make a hasty retreat and finally make it to the school. There, Zach confronts Stine about Hannah's true nature and even shares Stine about the loss of his father. Stine's typewriter is finally found, so now everyone in the school must be warned. Champ and Zach tell everyone in the gym, who are all at a school dance, but of course no one believes them. It's then that the praying mantis monster abducts someone and everyone believes Zach and Champ.

Zach immediately takes charge and instructs everyone to keep the monsters at bay, while Stine writes his new story. The monsters get in however and so does Slappy, who breaks Stine's fingers, so he can't finish the story. So then Stine nominates Zach to finish it for him, but before he can, they lure the monsters away from the school. Stine wanted to sacrifice himself to do so, but Zach had an idea to lure the monsters away with a bus lined with explosives. On another school bus, they make it to the very same amusement park, Hannah took Zach to. Inside a house of mirrors, Slappy confronts all of them and unleashes The Blob that ate everyone on them. So then he, Champ and Hannah make way to the Ferris Wheel, where Zach is able to finish writing the book. Though he is reluctant to open the book and trap the monsters, because of Hannah. She told him that she already knew what she was and still told Zach to open the book, which he refused. Zach finishes the story, but is reluctant to open the book because Hannah will be trapped inside it as well. Hannah reveals that she knew she was not real all along and opens the book, sucking all of the monsters into it. While Zach tries to hold on to her, Hannah accepts her fate and is imprisoned as well after they kiss.

The next day, Zach and his mom come back to school, which is being partially rebuilt. After Zach leaves his creative writing class now being taught by Stine, he is reunited with Hannah, who was brought back by Stine through a new manuscript, and they share a kiss.

Zach is a typical-looking teenage boy with a Caucasian skin tone and very short brown hair. He is tall and is in very good shape, since he was able to leap over the fence to R.L. Stine's house. He never describes himself in the Movie Novelization.

Zach at first seemed to have a slightly cynical views on life ever since his father died. However he hid it with a very sarcastic and dry since of humor. However when he met Hannah, he began to open up more and when Stine's monsters invaded the school, he became more heroic and even took charge of keeping the monsters out of it. Zach is also very smart as he is the one to come up with the plan for Stine to write a single story to capture all the monsters.

Hannah is Zach's love interest in the Goosebumps movie. When Hannah first meets Zach, it isn't love at first sight. (However, in the novelization of the film, Zach describes Hannah as being pretty.) After Hannah takes Zach to the ferris wheel, it is clear that they share a connection.

Towards the end of the movie, Zach and R.L. Stine have to write a story to trap all of the monsters from the Goosebumps series. Zach knows that in order to trap all of the monsters, he will also have to trap Hannah. Once the book is finished, and Zach opens the book, he tries to hold on to Hannah in an attempt to save her. Hannah accepts her fate and after a kiss, is imprisoned as well. Days later, Zach asks Stine if he misses Hannah, but Hannah suddenly reappears. Stine reveals that he wrote her back into existence with another book. She and Zach kiss and leave school together holding hands as Stine burns Hannah's manuscript, preventing her from going back to the book.

When they first met, Zach seemed weirded out and a bit annoyed by Champ. Though he trusted him to be the look out while he searched around Stine's house for Hannah. (Though Champ chickened out and went with Zach) and during the adventure him and Champ grew closer together.

Stine and him strongly disliked each other when they first met, but throughout the film, they bonded and by the very end, Zach and Stine became close friends. 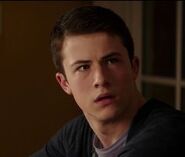 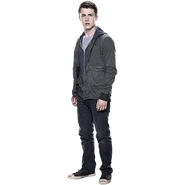 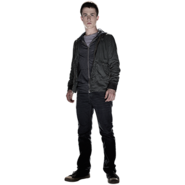