One Day at HorrorLand
You Can't Scare Me! is the fifteenth book in the original Goosebumps book series. It was first published in 1994.

Both the original 1994 and Classic Goosebumps cover illustrations feature some Mud Monsters emerging from the mud.

IT'S GONNA BE A SCREAM!

Courtney is a total show-off. She thinks she's so brave and she's always making Eddie and his friends look like wimps. But now Eddie's decided he's had enough. He's going to scare Courtney once and for all. And he's come up with the perfect plan. He's going to lure Courtney down to Muddy Creek. Because Eddie knows Courtney believes in that silly rumor about the monsters. Mud Monsters that live in the creek. Too bad Eddie doesn't believe the rumor. Because it just might be true...

Eddie's class is going on a field trip to Greene Forest. During this trip, Eddie and his friends plan to scare Courtney, one of their classmates. Eddie and his friends hate how perfect Courtney always is! Eddie's friend group consists of two girls, Molly and Charlene, and one boy; the boy, Herbie, is nicknamed "Hat" because he seemingly always wears a hat. During the trip, Eddie is almost bitten by a snake, but Courtney stops it. Later during the trip, Courtney picks up several bees with her bare hands. She then throws these bees at Eddie and Hat. This causes the boys to panic, and their classmates laugh at them. On the bus ride home, Eddie and his friends try to devise a method for scaring Courtney. During their discussion, Molly offers to use her brother's rubber snake to scare Courtney.

When they are back at school, Molly hides the rubber snake in Courtney's lunch bag. Unexpectedly, their teacher, Mr. Melvin, announces that he's forgotten his lunch. Courtney offers him some of her lunch and hands him her lunch bag. Mr. Melvin finds the snake in the bag and screams in surprise. Courtney rushes to the snake and stomps it into two pieces. After school, Eddie is confronted by his neighbor, Mrs. Rudolph. She explains that her cat is stuck in a tree. As the cat begins to fall, Courtney appears. Courtney climbs the tree and rescues the cat, bringing it back safely. Mrs. Rudolph shames Eddie for not being brave enough to help.

By the next day, Eddie and his friends have formulated a plan to scare Courtney: they are going to steal a tarantula from their science teacher and drop the creature on Courtney's head. After school, Eddie and Hat sneak into the science classroom. Eddie finds a plastic container, pokes some holes in the top, and uses the container to scoop up one of the class tarantulas. The boys hear their science teacher returning, so they duck into a supply cabinet. As the two boys hide, Eddie makes the startling realization that the plastic container for the tarantula is open. Eddie suddenly feels the large arachnid crawling on his leg. Hat grabs the tarantula and places it back in the container. Eventually, when their teacher is no longer present, the boys manage to sneak away. Eddie hides the tarantula in his locker.The next day, before gym class, Eddie and Hat plan to stand upstairs and drop the tarantula onto Courtney. When it comes time for Hat to drop the tarantula, he accidentally drops it into Molly's hair by mistake. Eddie and Hat are spotted by the gym teacher, and the boys are punished for their actions.

Back at home, Eddie struggles to come up with a new plan to scare Courtney. He is startled by his older brother, Kevin, who is dressed as a Mud Monster. Kevin is making a film about Mud Monsters; according to local legend, Mud Monsters — terrifying humanoid creatures made of mud — live in Greene Forest. Eddie asks his brother for advice on scaring Courtney. He suggests that Eddie scare her with something big like a large dog. On Saturday afternoon, Eddie discusses the ideas with his friends at Charlene's house. They don't know where they will get a dog ferocious enough to scare Courtney. Charlene says that her dog, Buttercup, could do it. Charlene whistles, and Buttercup rushes up to her and growls menacingly. According to Charlene, Buttercup gets really aggressive whenever someone whistles. Since Courtney has a tree house in the woods, the kids will try to scare her while she's there.

On Sunday, it is raining. Kevin is disappointed because he won't be able to film the end of his movie. Eddie and his friends go to the woods, and they wait for Courtney. Before he can scare Courtney, Buttercup unexpectedly runs off. Eddie chases after the dog, but he quickly temporarily becomes lost. The kids meet back up. While they contemplate going home, Courtney appears with Buttercup beside her. Courtney scolds Charlene for losing her dog. Eddie and his friends leave the woods. Later that night, when Eddie is walking home, he suspects that he's being chased and runs home. He realizes what he and his friends have been doing wrong: they haven't tried to scare Courtney at night. The next day at school, Eddie learns that Courtney is a firm believer in the Loch Ness Monster, Bigfoot, and other monsters. This gives Eddie another idea; when Eddie goes home, he asks Kevin if he and his friends could dress up as Mud Monsters and scare Courtney. After some bargaining, Kevin agrees. Molly also says that she can help lure Courtney out to the woods at night.

Eddie begins recounting the local folklore regarding the Mud Monsters for the reader. A long time ago, many poor people used to live in the woods near its creek. When a flood came, many of those people drowned, and the rich people in the town did nothing to help. Once a year, the deceased residents rise up from the ground as Mud Monsters in search of revenge.

Molly calls Courtney and says that she wants Courtney to help her look for Mud Monsters in the woods, which Courtney agrees to. Eddie, Hat, Charlene, and Molly meet and hide in the woods. When Courtney arrives with her friend, Denise, Molly greets them. After a short talk, Eddie sees three frightening Mud Monsters staggering towards the girls, but they don't seem to notice. Eddie is shocked when he sees three more Mud Monsters appear behind him. He recognizes one of these to be his brother. Kevin apologizes for being late. Eddie is immediately confused, and he wonders who the other Mud Monsters are. All of the kids begin screaming and run away.

The story jumps forward two weeks. Courtney brags to everyone about how she got to see real Mud Monsters! Eddie admits that he and his friends can't scare Courtney because they aren't brave enough.

You Can't Scare Me! was adapted into an episode of the Goosebumps TV series. It is the seventh episode of season two, and the twenty-sixth episode overall. The title drops the exclamation mark from the book title. 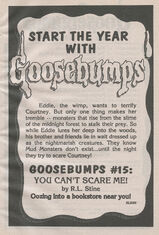 Book advertisement from The Werewolf of Fever Swamp. 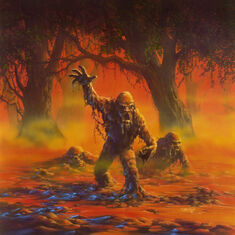 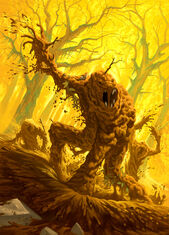 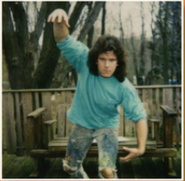 Tim Jacobus poses like a Mud Monster for the cover concept art.