Invaders from the Big Screen

The Werewolf of Twisted Tree Lodge
You're Plant Food! is the thirtieth book in the Give Yourself Goosebumps gamebook series. It was published in 1998.

The cover artwork shows a bunch of different plants in a conservatory, along with a child who has been turned into a tree and has green leaves for a hairdo.

The E. Ville Creeper Botanical Gardens has been closed down for ages. It looks abandoned...even haunted. But your teacher thinks it's a great place for a field trip!

You'll have to collect data from four different deadly gardens — and manage to stay alive. There are polka-dotted roses that have the power to eat people! And cactus needles filled with a powerful plant virus. Touch one of these and you'll grow a green thumb... not to mention roots leaves and bark! The choice is yours in this scary GOOSEBUMPS adventure that's packed with over 20 super-spooky endings!

You are on a class trip to the E. Ville Creeper Botanical Gardens. This place is very run down, old, and covered in moss and overgrown vines! It seems to be abandoned, but you and your best friend, Kerry are pretty excited. Soon the bus stops outside the gardens. Your teacher, Mr. Denmead, knows the owner of this place and does some talking as you recall that E. Ville has been closed for sometime now, while Kerry is just interested in the prize that the winning team will win for the best report. But you really want to explore this weird place!

Mr. Denmead begins to explain the typical field trip rules to everyone soon after. Inside, Mr. Denmead is beginning to wonder if this is really the right place for a field trip. Given how old and decaying it is, especially considering he almost fell through a weak area in the floor! But thankfully you stopped him, to which he thanks you. He then has everyone stand outside to wait a moment and he goes to investigate the back door. You and Kerry are growing concerned that he may cancel the trip, but you hope he does not. You two then decide to go in further to explore by yourselves.

You then see that you could either climb through a window further down or go through the door and try to jump over the weak area on the floor. But you do realize you run the risk of being caught either way...

You decide to climb through the window and up in the main hall. You then notice that the rest of the class have come in through the back door. Meaning that it seems like the field trip is going to continue after all. Some annoying child, Chris, tries to find out how you got in. But instead of answering, you keep a distance between the two of you. You then see a poster tacked to a thick vine, mentioning the details of a deadly plant virus. Which can affect both animals and humans. A part of you is unsure whether or not to hide the poster, since you do not want the trip to be cancelled. But you then decide it may be best to at least tell everyone, you and Kerry try to get Denmead's attention but instead, Kerry informs you that someone is watching you!

You go through the door and are very careful not to step on the weak section of the floor. However, the entire floor is weak and you and Kerry both end up falling through it. Some straw on the bottom ensures a safe landing, though, and you see that you're in the basement, but you need to get back to the higher floor and you and Kerry head to the nearby staircase. Climbing up it leads to the main hall of Gardens, which has green slime all over! Both you and Kerry then hear a scuttling sound...

Looking down, you notice some bugs have entered the room and one of them is holding a rope net. As you look, you notice they were trying to capture your entire class, and you must stop them! Depending on the choices you choose, you then learn about the bugs (or not), then come to a room where your class has been captured in some plant pods!

You then decide on whether or not to go against the bugs, and then try to find a way to save your class!

There are twenty-one bad endings and three good endings. 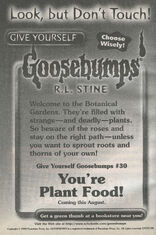 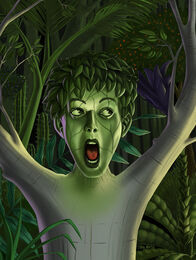 Retrieved from "https://goosebumps.fandom.com/wiki/You%27re_Plant_Food!?oldid=127816"
Community content is available under CC-BY-SA unless otherwise noted.