Red
Wolf Skin is a cursed object featured in the sixtieth Goosebumps book, Werewolf Skin, as well as its television adaptation.

The town of Wolf Creek has a long history when it comes to werewolves. In recent years, the town has become fearful of werewolves that terrorize the town every single night. Two of those werewolves being a married couple named Colin and Marta. For years the two have been cursed into wearing a pair of wolf capes every night which transforms them into powerful werewolves. To hide their identity, they enter the abandoned home of the Marling family next door and put on the capes. Once they become werewolves, they enter the forest and go on a rampage, usually tearing apart animals and eating their entrails.

When Alex Hunter arrives in Wolf Creek to spend Halloween with his Uncle Colin and Aunt Marta, he is curious about if the town really does have werewolves, as he intends to take pictures of them. When they arrive at their home, Colin and Marta warn Alex to stay away from the house next door, which belongs to a family known as the Marlings. However, his curiosity soon gets the better of him. The other neighbor, a girl named Hannah Stoneman, also tries to warn Alex about the werewolves. As the days go by, Alex begins to suspect that there really are werewolves in Wolf Creek. After some close calls, Alex soon learns the truth as he sees Colin and Marta take off the capes. In hopes of freeing his aunt and uncle, Alex and Hannah sneak into the Marling house on Halloween night with the intent on destroying the capes, when Colin and Marta show up. They try to get the capes back when suddenly the full moon comes out, breaking the spell caused by the capes.

As Alex gets rid of the skins, he soon discovers there was a third wolf skin inside the Marling house. Hannah then reveals that it belongs to her before she turns into a werewolf and sinks her teeth into him.

In the book, the wolf skins are described as looking more like capes of dark fur, which transforms the wearer's body into that of a werewolf once they are worn. In the episode, the skins resemble a full body werewolf costume.

The wolf skins give the wearer the powers of a werewolf, which includes increased speed, senses and strength. The skins also have the power to control minds, making the wearer become addicted, needing to put their skin back on every night. In the television adaptation, the wolf skin can also move on its own and defend itself when it's being attacked.

The wolf skins are seemingly indestructible with the exception of one known weakness. If the wearer is unable to put the skin on that night, the curse will be lifted and the wearers will no longer be controlled to wear the skin.

Only four people have been known to wear the wolf skins. 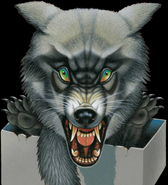 Wolf skin as depicted on the French cover of Werewolf Skin.

Colin and Marta in their wolf skins. 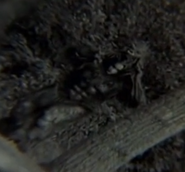 Hannah in her wolf skin.

Wolf Skin mask as a tear-out from the original book.
Community content is available under CC-BY-SA unless otherwise noted.
Advertisement