Grey (comic)
Purple (game)
Wolf Girl is a humanoid wolf-like creature/animatronic created by Mr. Wright, and is a minor antagonist that first appeared in the thirty-fifth book in the original Goosebumps series, A Shocker on Shock Street.

She, alongside her brother Wolf Boy, are first seen when both Erin and Marty were about to drown in quicksand pit. Just when all hope seems lost, Erin and Marty are rescued by Wolf Boy and Wolf Girl, two more stars from the Shock Street franchise. The kids slowly realize that the werewolves are too lifelike, possibly even real. The werewolves try to attack, but Erin finds one of the red toy guns and uses it to freeze both creatures... But the gun turns out to be useless. The kids reascend the wall in order to escape the wolves. After doing this, they spot their tram in the distance. Erin and Marty run to the tram while being chased by the werewolves. Fortunately, the kids get to the tram unharmed. After that, both her and her brother, Wolf Boy are presumably still on Shock Street.

She is exactly like Wolf Boy as both were designed to be vicious as they now want to eat the kids after they saved them.

In the Graphic Comix, she looks to be a humanoid wolf-like creature with grey hair. She also has a torn dress and a tooth necklace. In HorrorTown, she looks to have on a schoolgirl outfit while also wearing an string tie. 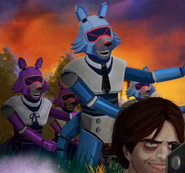 Some Wolf Girls as seen in the "Shocker on Shock Street" loading screen for Goosebumps HorrorTown. 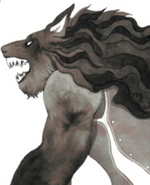 Wolf Girl as depicted in the Korean translation of A Shocker on Shock Street. 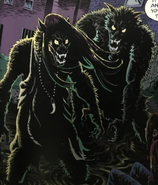