Wolf Creek is a town featured in the sixtieth book in the Goosebumps series, Werewolf Skin. In the television adaptation of the book, the town's name was written as one word.

Alex Hunter, the protagonist of Werewolf Skin, is sent to spend several weeks in the small town of Wolf Creek with his Aunt Marta and Uncle Colin. Alex is told by his uncle that the town was named after its wolf population, but he also says there are no more wolves. When Alex's aunt hears this explanation, she criticizes it for not being entirely honest, but she never explains further. Evidently, the second half of the town name derives from the actual creek located in the woods, which is also called Wolf Creek.

A majority of Wolf Creek's residents believe in the existence of werewolves.

In the television adaptation of the book, the viewer can catch glimpses of the town's newspaper, Wolfcreek Crier. The paper proclaims that three hunters have recently gone missing in the woods. 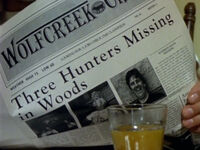 The town's named residents include:

Retrieved from "https://goosebumps.fandom.com/wiki/Wolf_Creek?oldid=120248"
Community content is available under CC-BY-SA unless otherwise noted.