Evil/Neutral (as the Werewolf of Fever Swamp)

Good (as Will Blake)

Michael Barry (episode)
John Bernecker (film)
Will Blake is the main antagonist of the fourteenth Goosebumps book, The Werewolf of Fever Swamp, and its television adaptation.

Grady Tucker first met Will after Grady's family moved into their new home in Florida. The boys quickly became friends. When Grady met Cassie later on, he learned of werewolves and one most likely existing in Fever Swamp not too far from his house, due to animal killings and a hunter gone missing. Will did not believe in such things and often argued with Cassie that werewolves are not real. As days went by, Grady eventually ventured into the swamp alone with Will. When Will vanished a few minutes after Grady entered the swamp, Grady started looking for Will. Then Grady was attacked and bit by the werewolf who he realizes is Will due to the werewolf having the same thick neck and broad shoulders. Luckily for Grady before he passed out, Grady's dog Wolf attacked Will and fought him off. After the Swamp Hermit witnessed their fight, he brought Grady home where his father told him what the Swamp Hermit witnessed. Grady had his dad check Will's house, only to find the house mangled and no one living there. After that night, Grady soon learned that Will cursed him when he bit him. With Will gone, he has the swamp all for himself and now goes with Wolf on hunts and explorations in Fever Swamp during full moon nights.

The TV show version of Will's character is slightly different from his book counterpart. In the TV episode, he believes in werewolves and accuses the swamp hermit of being one as opposed to the novella where he scoffed at Cassie's beliefs in them. It is also stated that he killed the Swamp Hermit's wife and children (which was never stated nor implied in the original novella). Grady ran into the Swamp Hermit when his net caught what was the werewolf when he actually caught a deer. The Swamp Hermit is then attacked and killed by the werewolf. When the full moon is obscured during a lunar eclipse, Will partially reverts to human form. Having become friends with Grady, Will warns him to leave before he becomes uncontrollable again. But the moon becomes visible again and Will begins compulsively howling as he turns back into a savage beast. As Will attacks Grady, but he is not shown biting him like in the original novella. While Will is attacking, Vandal shows up to defend Grady. Vandal knocks Will into the quicksand-acting bog of Fever Swamp and he sank to the bottom. What appears to be his skeleton rises from the swamp some nights later.

In the Goosebumps film, Will Blake's werewolf form appears in an abandoned Supermarket rummaging through the meat aisle until Champ accidentally alerts him of the groups presence. By opening a soda he pursues them throughout the Supermarket into a parking lot, only to be rammed by Lorraine's car sent flying into a dumpster. He reappears outside Madison High School with the other monsters as Slappy leads them into attacking Madison High School to dispose of R.L. Stine. He was about to attack Taylor, but is saved when Champ bites him with his "silver teeth filings" The werewolf appears again with the other monsters pursuing a bus Stine and the kids are using to escape only for it to be revealed to be a decoy rigged to explode when the werewolf and the Abominable Snowman open its doors. He is sucked back into a book that R.L. Stine and Zach wrote by the final battle.

In his human form, Will has the appearance of a twelve-year-old, Caucasian boy and resembles a football lineman with broader shoulders and a thicker neck. He has dark brown hair, cut very short and it stands straight on top, like a flattop and is swept back on both sides.

In his werewolf form, Will appears as a gigantic greyish black-furred wolf with glowing yellow eyes.

In the Goosebumps films, his werewolf form is more bipedal and has brown fur, he also wears blue shorts with red and white stripes and damaged athletic sneakers. He also has a heart tattoo with MOM on it.

In his human form, Will is quite friendly and has a fair bit of humor in him, but as a werewolf he is really vicious and will attack any living creature in sight. He has a very strong knowledge of Fever Swamp and its history and he likes exploring the swamp itself. Like everyone else in his neighborhood, he has never fully met the swamp hermit, but he thinks that he is weird. He is often annoyed with Cassie constantly talking about werewolves and thinks that she is weird too. Up until Grady found out, no one had ever suspected Will of being the werewolf that terrorized Fever Swamp. Whether Will knows that he is a werewolf or not is unknown.

Will as seen on the Topps Puzzle Card.

Will Blake GIF from Goosebumps Keyboard.

Will as a werewolf as depicted on the UK cover of The Werewolf of Fever Swamp. 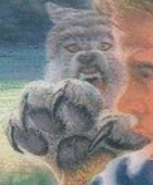 Will as a werewolf as depicted on the first Dutch cover of The Werewolf of Fever Swamp.

Will as a werewolf as depicted on the second Dutch cover of The Werewolf of Fever Swamp.

Will as a werewolf as depicted on the French cover of The Werewolf of Fever Swamp.

Will as a werewolf as depicted on the Korean cover of The Werewolf of Fever Swamp. 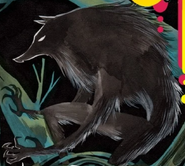 Will as a werewolf as depicted on the Indonesian cover of The Werewolf of Fever Swamp.

Will in human form with Grady Tucker.

Will Blake in the Goosebumps movie.

Will Blake in Goosebumps 2: Haunted Halloween. 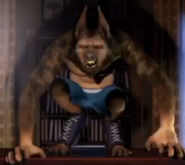 Will on the Goosebumps Night of Scares loading screen. 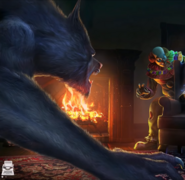 Will on the Goosebumps Dead of Night loading screen. 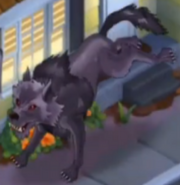 Will Blake in Goosebumps HorrorTown.

Will attacking the player in Goosebumps Night of Scares and Goosebumps Dead of Night. 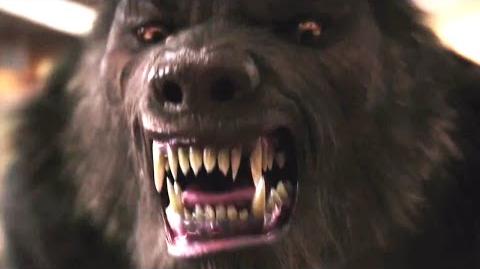