Why I Quit Zombie School

Don't Scream!
Why I Quit Zombie School is the fourth book in the Goosebumps Hall Of Horrors book series. It was published in 2011.

The cover illustration depicts a zombified student emerging from a locker.

Poor Matt Krinsky! Not only are his parents making him move away from all of his friends, but they're enrolling him in a boarding school. It's not a strict place, but that doesn't mean things are normal. While Matt is used to being one of the better athletes in his class, these kids move at a dead-slow pace. It doesn't take long for him to realize that he's surrounded by zombies. And his classmates have begun to notice his heartbeat and warm skin. Can Matt convince them he is undead long enough to stay alive?

The Story-Keeper welcomes Matt Krinsky to the Hall of Horrors. Matt is holding a rubber hand, which he says saved his life. Matt starts his story.

Matt's family has moved into a new town, and is making Matt attend a boarding school called Romero Academy. Matt starts getting worried because the school looks like it's covered in shadows, but his sister Jamie mocks him and says his brain has rotted due to all the horror movies he watches. They arrive at the school, and Matt sees a few kids eat a dead squirrel but when he tries to show this to his parents, the kids have vanished. They are welcomed by the principal Mr. Craven who tasks a girl named Franny with giving Matt a tour of the academy. Matt notices that all the kids walk slowly.

He meets twin brothers Wayne and Angelo who take over the tour. Matt sees that their eyes are all white with no pupils, but Franny acts like this is normal. After showing Matt a few areas, Wayne trips and falls down some stairs, which knocks him unconscious. Some teachers silently take him away on a stretcher and the students move on like normal. Matt tells his parents about this but they think it's nothing to worry about.

They leave and Matt keeps himself busy by messing with his horror movie makeup he got from a makeup kit. He turns himself into a ghoul with the makeup and tries to give Franny a scare but doesn't react to his face at all. He asks her about Wayne and she says he was taken to the Reviver Room but it "didn't take". She explains that it is a place the students go when they are low on energy or are damaged, as a bolt of energy from a device revives them.

A few days later, Matt and his new friends are in an area in the middle of the school called Center Court, which includes a balcony. Matt sees a kid jump off the balcony but the other students just watch as he does this. Despite landing with a sickening crunch, the kid gets up like nothing happened and the students cheer.

More kids start to do this and Angelo invites Matt to join them. At lunch, the other kids are eating things like raw meat and egg shells and are doing so very noisily. One boy chokes on his food and starts vomiting everywhere, until some kids eventually take him to the Reviver Room. Later in the school's study room, Franny asks Matt when he died. When he shrugs it off as a joke and says he's alive, Franny reveals that Romero Academy is a zombie school and that they are the only living kids here. She warns him to pretend to be a zombie, as he'll be in danger if they discover that he's alive.

Angelo shows up at Matt's door sometime later and says one of his friends knows a boy who went to Matt's old school and knows he was the star player on the soccer team and they want want him for their team. Matt tries and plays so well that the kids start noticing he has a lot of energy, so he slows down to appear more zombie-like.

That Saturday is Parent's Day, and Matt hopes to convince his parents to take him out of the zombie school. Matt takes them to the lunchroom to show them the kids weird eating habits, but they pass it off as the kids just being really hungry. He takes them to Center Court to see the kids jump off the balcony, but they bend down to pick up Dad's phone while a girl is jumping.

He meets up with Franny and tells them to tell his parents that he's telling the truth, but she lies which she later says is because other zombies were watching them. Matt's parents leave and that night the school is having a dance party. Matt tries to fit in by eating rotten fruit and doing a zombie dance called the stomp but one girl touches him and notices he is warm.

They want to test him to see if he's alive, and try to force him to jump off the balcony. At the last minute, Matt pulls out a rubber hand he brought with him and convinces the kids that it is hand which fell off his zombie body. This works, but now they want to take him to the Reviver Room to put his hand back on. A kid named Ernie takes him there but he is pulled away to go back to the dance before he can pull the switch, so Matt plans to claim that he did it himself. Matt puts on some makeup to fool them further but the next day in the locker room, it starts to come off and they discover he has a heartbeat.

Matt runs away and jumps over a nearby fence and ends up in a graveyard, full of the students' graves. He discovers a gravestone with Franny's name on it, meaning she is actually a zombie. She appears to confirm this, as she is tasked with spying on new kids to make sure a live one doesn't get it by mistake. Franny grew to like Matt, so she decided to help him blend in instead of exposing him to the others. She tells him they plan to give him a final test to prove he's undead, which will include running him over with a SUV and throwing him off a cliff but wishes him good luck. In a last desperate attempt to fool him, he goes all out with his monster makeup to appear like a gross zombie.

He shows off his gross look the next day and it works too well as they want to send him to the Reviver Room again. The man in charge of reviving them pulls the switch but the machine is low on juice. Matt pretends that the small zap cured him. This fools him and a week later, Matt has convinced his parents to pull him out of Romero Academy and put him in a new school.

Matt's new school seems a lot better, until he notices that the water fountain has red liquid in it and the kids in the cafeteria are having bowls full of it. The dean of students shows up and reveals his fangs, welcoming Matt to Dracula Middle School.

The Story-Keeper thanks Matt for telling his story. A new guest named Jack Harmon comes in, with a cell phone, to tell his story. 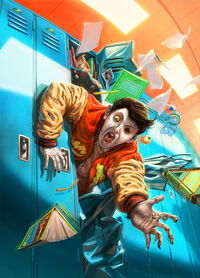 Retrieved from "https://goosebumps.fandom.com/wiki/Why_I_Quit_Zombie_School?oldid=150585"
Community content is available under CC-BY-SA unless otherwise noted.