Monster Blood II
Why I'm Afraid of Bees is the seventeenth book in the original Goosebumps book series. It was first published in 1994.

The cover illustration shows a bee with Gary Lutz's head flying above Millville.

Gary Lutz needs a vacation...from himself. Bullies are constantly beating him up. His only friend is his computer. Even his little sister doesn't like him. But now Gary's dream is about to come true. He's going to exchange bodies with another kid for a whole week. Gary can't wait to get a new body. Until something horrible happens. And Gary finds out his new body isn't exactly human...

It is a hot July day in Millville, and Gary Lutz is alone in his backyard when he hears a buzzing sound. Gary assumes that one of Mr. Andretti's bees escaped. Mr. Andretti, Gary's neighbor, is a beekeeper. Gary peers into Mr. Andretti's backyard, and he discovers that Mr. Andretti is covered in bees. Mr. Andretti screams that the bees are out of control, which frightens Gary. After a few moments, Mr. Andretti admits that he was only joking. Gary is regularly only bullied by other kids, so he is upset that adults are now picking on him.

Gary goes and plays softball with some local kids, but he embarrasses himself with his own poor playing. He goes home, and he's beat up by three local bullies. After a short while Gary, Gary goes bike riding. Gary tries to impress two girls from his school, but he crashes his bike. Disappointed, Gary goes home and begins playing on his computer. Gary consults a forum in the hopes of beating a villain in a video game he plays. Gary sees an advertisement that advertises something strange: vacations from your life! The company claims that they can help their customers switch bodies with someone else for a week.

The next day, Gary walks to the address stated in the advertisement. There, Gary finds a plain building. Inside, he meets an employee of the company. The woman explains that the company, Person-to-Person Vacations, can help him switch minds with another kids his age. The woman, Ms. Karmen, takes Gary's photo, and she tells him that she add it to the company's catalog. When another kids wants to trade places with him, Gary will receive a call. Gary leaves the building beat up by the three local bullies from earlier.

Several days pass. One afternoon, Mr. Andretti pranks Gary again by releasing some of his bees. Gary is upset, but he gets a call from Person-to-Person Vacations. According to them, someone wants to trade places with Gary. Gary heads back to the vacation company, and he is informed that a boy named Dirk Davis wants to trade places with him. Dirk is cool, but he needs Gary's brain so he can pass an important math test. Gary notices that he didn't close the back door, and bees start flying in. Gary closes that door, but there are already bees in the building. Ms. Karmen straps Gary onto the company's body-switching device. The woman switches the machine on.

Gary feels a shock shortly before everything goes black. When he wakes up, Gary finds that he isn't Dirk Davis; he's a bee! Thinking that the transfer was a success, Ms. Karmen begins to leave. Gary tries to get her attention, but he can't. Gary flies home, and he discovers that Dirk is in control of his body. Gary decides that he must return to Ms. Karmen's office. However, when Gary goes outside, he is caught by Mr. Andretti and places Gary with the other bees. Gary sees the other bees making honey. Gary, knowing that he needs to eat, decides to drink some honey. When Mr. Andretti checks on the bees, Gary manages to escape. Gary goes home, but he is almost swatted by his sister. Gary flies to his room and finds that Dirk, still in control of Gary's body, is asleep.

Gary goes to his computer and types out a message warning his family that he is a bee. Dirk wakes up, but he shuts off the computer before he reads the message. Gary follows Dirk. Gary discovers that Dirk has been giving other kids skateboarding lessons in the park. Gary flies to the Person-to-Person Vacations office. Gary notices that there is a microphone at Ms. Karmen's desk. Gary begins talking into the microphone, and he informs Ms. Karmen that he has been transferred into the body of a bee, and he asks to be swapped back into his old body.

Ms. Karmen tells Gary that Dirk likes Gary's friends and family so much that he won't swap back with Gary. Ms. Karmen becomes upset and leaves the waiting room. Gary exits the building and finds Dirk's real body. Gary asks the boy for help, but Gray quickly realizes that a bee is controlling Dirk's body. Gary then finds Dirk — still in Gary's body — intimidating the three bullies from earlier. Dirk goes back into Gary's house, and Gary follows. Gary asks Dirk for his body back, but Dirk says that he doesn't want to switch back.

Dejected, Gary goes outside. Gary is almost attacked by a group of bees. Suddenly, he gets an idea. Gary flies back to Mr. Andretti's hive. Gary gathers a swarm of bees. The swarm follows Gary back inside of his house. Even when he's covered in bees, Dirk refuses to give back Gary's body. Gary, in a moment of fury, stings Dirk. However, Gary slowly remembers bees die when they use their stinger. Gary flies outside, and his vision fades to black.

When Gary's vision comes back, he finds that he has returned to his regular body. Gary finds the other members of his family and hugs them. Mr. Lutz informs Gary that a swarm of bees are in his room. Gary enters the room and coaxes the bees outside using some honey and crackers.

A month later, Gary says that he has a new appreciation for life. He's less cowardly, and he's improved athletically. Gary even befriends Dirk! The book ends with Gary kneeling down and sucking the pollen from a flower. 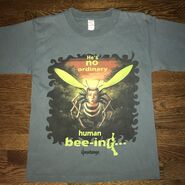 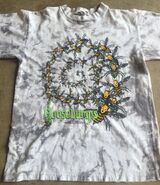 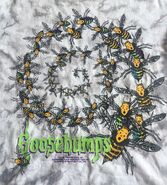 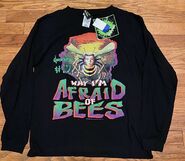 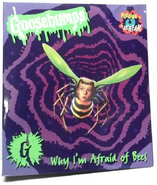 Beesa Wallet Card (front and back). 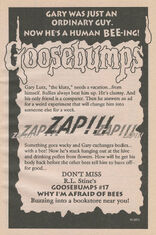 Book advertisement from One Day at HorrorLand. 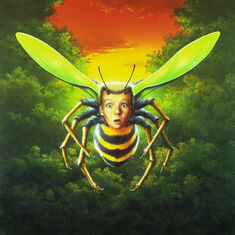 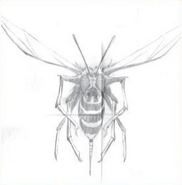 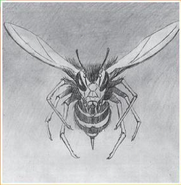 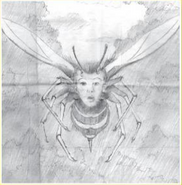 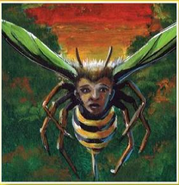