Anybody Got a Bandage?

My Friends Call Me Monster

Who's Your Mummy? is the sixth book in the Goosebumps HorrorLand book series. It was first published in 2009, alongside My Friends Call Me Monster.

The cover shows a mummy ringing a doorbell.

A Tomb With a View!

Abby and Peter are staying with Uncle Jonathan in an eerie old village. Their uncle knows a lot about Egypt, and his living room even looks like an ancient tomb. Do other secrets lurk inside the house? MUM's the word!

From Mummies to Dummies!

Next, Abby and Peter will get all WRAPPED up in a terrifying mystery. Slappy the Dummy and other villains have been sighted in HorrorLand theme park. A monster named Byron might offer help... if they can find him.

Abby and her younger brother, Peter, live with Granny Vee, whom is the only person who looks after the two siblings. Granny Vee tells the kids that she is not feeling well. She says that she is going to go to the hospital for a while, so the kids will have to stay with their Uncle Jonathan in Cranford, Vermont.

After getting off the train in Cranford, the kids talk to a woman on the street. The kids tell the woman what house their uncle lives in. The woman becomes frightened and tells them that she has heard many strange noises coming from their uncle's house. The woman runs off when the kids' uncle arrives. The kids ask Uncle Jonathan about the woman, and he says that the woman was Crazy Annie. Uncle Jonathan says that the woman did not like his dogs. Uncle Jonathan takes the kids back to his home, which is large and surrounded by bats. The inside is decorated with many relics from ancient Egypt. The kids also meet a housekeeper named Sonja, and Sonja warns the kids not to enter one specific room. Strangely, Sonja keeps complimenting Abby's hair. Abby also meets Uncle Jonathan's cat, Cleopatra. Some time after their arrival, Uncle Jonathan takes the kids to a recreation of an Egyptian temple within the house. Enclosed in a mummy case within the temple, there is a mummy of a young boy who used to be an ancient Egyptian ruler.

During the night, Abby looks out of her bedroom window and sees an ominous man gifting off bats outside. The bats attack him and chase him off. Abby talks to Sonja, and Sonja says that the bats protect the house. Abby hears moans coming through the walls and they seem to say, "I want to die..." The following morning, Uncle Jonathan says that the man outside was a thief, but the house was secure. While Abby is combing her hair, she notices that a lock of hair is missing. Abby is attacked by Uncle Jonathan's cat, Cleopatra. Abby shoots the cat with her squirt gun, but this causes the cat to melt into a pile of ashes. Abby is scared by this, so she gets her brother and prepares to ask Uncle Jonathan if they can leave. However, the kids do not know where Uncle Jonathan is, so they are forced to check the room that they were told never to enter. Inside, they find dozens of mummy cases. The kids find Uncle Jonathan inspecting a mummy. Uncle Jonathan unwraps a mummy and eats its organs. Since Uncle Jonathan does not see them, the kids run off. Again, Abby hears the mummies begging for death.

The kids run into the village. The kids realize that they are being followed by bats. At the train station, the only person the kids can find is the man who had been attacked by bats during the previous night. The kids run away from the man. The kids are rescued by Crazy Annie. She offers them a ride. Annie drives the kids back to Uncle Jonathan's house. Crazy Annie was hired by Uncle Jonathan to make sure that the kids would not escape. Uncle Jonathan takes the kids back to his mummy museum. Uncle Jonathan says that he, Annie, and Sonja are ancient Egyptians who found the secret to eternal life. They eat mummies to stay alive. Cleopatra had also been from ancient Egypt. Uncle Jonathan reveals that he has to keep the mummies alive in order to keep their organs fresh. Uncle Jonathan says that he needs Abby and Peter's hair because it contains a protein that he can use to keep the mummies alive. Uncle Jonathan wants to keep the kids until their hair is gray. Suddenly, the man who had tried to break into the house previously entered the room. The intruder says that he is their Uncle Jonathan. The first Jonathan reveals himself to be Tuttan-Rha. The real Uncle Jonathan tries to take the kids and leave, but Tuttan-Rha says that the bats will stop them. Abby gets her squirt gun. Uncle Jonathan and Tuttan-Rha begin fighting, and Crazy Annie manages to get Abby's squirt gun. Abby goes to the bathroom, gets water from the sink, comes back, and spits the water onto Tuttan-Rha. Tuttan-Rha melts into ashes. Surprisingly, Sonja and Annie melt as well. Abby guesses that this was likely because they shared a life force. Before leaving, Abby checks on the mummies in Tuttan-Rha's chamber. She leans in to check one of the mummies, and it grabs her. It thanks her, and then it dies.

After some time, the kids and their uncle travel to the train station. Uncle Jonathan apologizes for letting an imposter pick them up. The kids get on the train. They travel back to Granny Vee. When they arrive, Granny Vee appears frail and weak. Abby pulls out a package and unwraps something that looks like liver. Granny Vee is uncertain about eating Abby's gift, but Abby says she'll explain what the item is after Granny Vee has eaten a piece. Abby assures Granny Vee that she will be around for a long time...

Abby gets an invitation to HorrorLand in the mail. She wants to take Peter, but he refuses to go.

During Abby's first night in the Stagger Inn, she dreams that a mummy is in her room. Abby screams and wakes up. She sees muddy footprints in her room and yellow gauze. A boy, Michael Munroe, knocks on her door. He says that he is from the next room over, and he was concerned when she screamed. The two become friends and they agree to explore the pro together the following morning.

The next day, the two kids meet a horror named Byron. Byron gives the kids a note telling them that they should leave because they are in danger. Abby gets an invitation to the Vampire Café, so she decides to go. She sits next to Carly Beth, Sabrina, Matt, Billy, and Sheena. Michael sits next to a kid named Robby. Abby explains that she saw Byron, and the other kids are surprised by this. Robby mentions that he saw the missing girls while he was in the arcade. Robby shows off the Panic Park token that he had picked up, but a waitress takes it.

The kids leave and they are met by Byron. Byron gives them all HorrorLand tokens. Abby has a pyramid on her coin. All of the kids have a different design on their coins. Before leaving, Byron says, "Inside the Bat Barn. Four o’clock sharp." Later, Michael pulls a tracking chip off of his coin. All of the kids give their coins away to passing guests except Carly Beth and Sabrina. The kids go to the Bat Barn, and Abby finds a flyer for the Mirror Mansion. Inside the Bat Barn, the kids are swarmed by bats, and they cannot find Byron. 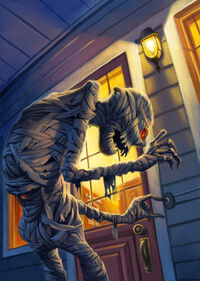 Retrieved from "https://goosebumps.fandom.com/wiki/Who%27s_Your_Mummy%3F?oldid=126060"
Community content is available under CC-BY-SA unless otherwise noted.