All dressed up and no place to howl!

When the book released, it included a "Howl-o-ween" mask tear-out based on the cover.

The cover illustration shows a box with the werewolf skin in it on a bed. This is the first cover to feature an updated Parachute Press logo. The book's tagline is a reference to the saying, "All dressed up and no place to go!" The back tagline is a reference to "It's 10 pm. Do you know where your children are?", a public service announcement which aired from the 1960s to 80s.

IT'S A FULL MOON...DO YOU KNOW WHERE YOUR WEREWOLF IS?

Picture this—Alex Hunter, photography freak, hanging out in Wolf Creek. Who lives in Wolf Creek? Alex's uncle Colin and aunt Marta. They're professional photographers. Uncle Colin and Aunt Marta are pretty cool. They only have two requests. Don't go into the woods late at night. And stay away from the creepy house next door. Poor Alex. He just wanted to take a couple of pictures. But now he's about to find out the secret of Wolf Creek. Late one night. When the moon is full...

Alex Hunter is an aspiring photographer who carries his camera practically everywhere he goes. It is also revealed that Alex is particularly interested in a horror-themed photography contest. When his parents are called out of the country on business, Alex is sent to the small town of Wolf Creek so that he can stay with two of his relatives, Aunt Marta and Uncle Colin. With Halloween approaching, and the added benefit of being near the woods, Alex is sure he'll be able to photograph something amazing for the contest.

When Alex arrives in Wolf Creek, Alex's aunt and uncle introduce only two rules. First, stay away from the run-down home next door; Alex is told that the house belongs to the Marlings, an illusive and crazy couple. Second, stay out of the forest surrounding the town late at night. Alex meets Hannah, a girl who lives in the neighborhood. Aunt Marta suggests that Hannah show Alex around the woods, so the kids head out. Unfortunately, Hannah and Alex run into two bullies, Sean and Arjun. The bullies try to steal Alex's camera, but Hannah helps defends Alex. Before the bullies leave, they allude to the possibility of werewolves roaming the woods.

At night, Alex hears howls coming from the Marlings' home. Suspecting that something interesting may happen, Alex reaches for his camera, but he can't seem to find it. Eventually, Alex learns that he left his camera in the woods, so he bolts outside. While exploring the woods, Alex finds his camera. He hears the sound of two animals struggling, followed by a bleat and the sound of chewing. Alex runs away. While running through the woods, he finds tattered animal remains. When he is almost home, he sees animal footprints leading to the Marlings house. He stares at it for a while.

The next day, Alex tells his aunt and uncle about the footprints, and they explain that the Marlings have two large dogs. Aunt Marta also informs Alex that the Marlings called the police when they saw Alex near their home. Alex's aunt and uncle tell him to not go by the Marlings' house again, and Alex accepts this. Alex goes to the local school, as he promised his parents he would. On his way to school, he meets up with Hannah, and Hannah tells Alex that the Marlings are werewolves. At school, the teacher begins teaching about werewolves. He says that the moon doesn't have to be full for a werewolf to come out. At daybreak, werewolves must shed their wolf skin and hide it away. Arjun and Sean meet Alex after class and tell him they can show him a werewolf. Despite not truly believing in werewolves, Alex needs a photo for the contest, so he agrees to sneak out into the woods at night. Later, when Alex tries to sneak out, he discovers that his aunt and uncle locked his door from the outside, and they installed bars over the windows. While inspecting the bars, Alex sees two figures exiting the Marlings' house.

The next day, Uncle Collin and Aunt Marta say that they locked Alex in to keep him safe. They also say that the Marlings called the police because they supposedly saw Alex spying. At school, Alex learns that Sean and Arjun didn't go to the woods, and they had tried to trick Alex into going alone. Alex tells the boys that he went to the woods, saw a werewolf, and photographed it.

Later, Alex jams the lock on his door to prevent it from working properly. At night, he is able to sneak out. He begins observing the Marlings' house. He sees two figures exit the house, and they appear to be wearing capes. The people quickly transforms into werewolves. Alex drops his camera and is almost spotted, but the werewolves don't find him and go into the woods. Alex follows the creatures in the hopes of getting a photo. Also, since his aunt and uncle are supposedly in the woods photographing animals, Alex feels that he needs to find and warn them. Alex follows the creatures until morning, taking photographs all along the way.

As the sun begins rising, he sees the werewolves shed their skin, revealing Aunt Marta and Uncle Colin underneath. The couple enter the Marlings' house and place their skins inside. Hidden from view, Alex watches Aunt Marta and Uncle Colin sneak back over to their own house. Alex walks over to the Marlings' house, and he finds that it's completely empty aside from two werewolf skins.

Alex tries to sneak back inside his aunt and uncle's house, but he's spotted by Aunt Marta. The couple doesn't seem to know that their cover has been blown. Some time passes, and Hannah comes over. Since it is Halloween, she shows off her Halloween costume. Alex takes her upstairs and explains what he's learned about his aunt and uncle. Hannah comes up with a plan: steal and wear the wolf skins to prevent Aunt Marta and Uncle Colin from transforming, possibly lifting their curse. That night, Hannah sneaks into the Marlings' house.

The two children remove the skins, and the four happily head back to Alex's house. On the way back, Alex stops by the abandoned house, believing it to be a safe spot to leave the wolf skins. Hannah refuses to go inside, so Alex goes inside all by himself. When Alex sets down his wolf skin, he notices that the house seemingly has an extra werewolf skin lying in the closet. While pondering the item, someone appears behind Alex. Alex turns around and sees Hannah wearing a werewolf skin.

Hannah informs Alex that she had never needed Aunt Marta or Uncle Colin's werewolf skin because she was able to bring one of her own from her house. Hannah pounces on Alex, sinking her teeth into his chest.

Werewolf Skin was rereleased digitally. The cover for the digital version uses the same template used for the 2003 - 2007 reprint series, even though no physical book uses this cover. The front tagline changes "no place" to "nowhere". 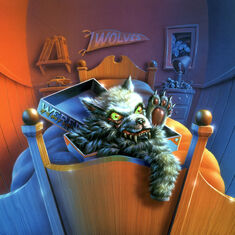 Book advertisement featuring the original I Want To Be A Werewolf For Halloween title. Also advertises Return to the Carnival of Horrors and the Goosebumps Presents adaptation of "Calling all Creeps!"

Book advertisement with corrected title. Also advertises Return to the Carnival of Horrors and the Goosebumps Presents adaptation of "Attack of the Jack-O'-Lanterns".

Back cover (of regular edition) advertising 'Terrifying Werewolf Mask Inside!'

Howl-o-ween mask included in earlier printings of this book.