Scream of the Evil Genie

Welcome to the Wicked Wax Museum is the twelfth book in the Give Yourself Goosebumps gamebook series. It was published in 1996.

The cover illustration features Sybil Wicked in a museum. In the background, there are statues and head busts that are to the right of the window.

Too Hot to Handle!!

Your teacher thinks it'll be good for your class to hang out at the new wax museum in town. Yeah, right! Once you get there your teacher starts blah-blahing about something or other and that’s when you and your friend see the red door.

If you decide to check out what's behind door #1, you'll discover the museum owner’s secret for making lifelike sculptures. And it doesn’t look like fun! If you decide to ditch the red door and go the other way you'll end up meeting scary Sybil Wicked — and wish you hadn't. Will you escape this creepy place before you're turned into a human candle?

A history class is taking a trip to the Wicked Wax Museum the day before it opens. You and your friends, Jake and Liz, misbehave while on the bus. Then you are told by Mr. Dunning, the teacher, that you are not allowed inside. Eventually, Jake decides to go inside and soon starts screaming, providing you with the first choice in the book: whether to go in after him or to go find help. If you and Liz go after Jake, you find out the museum's secret of making their exhibits. Unfortunately, you and your friends may end up as the newest editions. If you go for help, the two of you will run into a mysterious man named Axel. He leads you to Sybil Wicked, since he's apparently working for her, and she is looking for a new face to replace her disfigured one, and she might get yours!

There are twenty bad endings and two good endings. 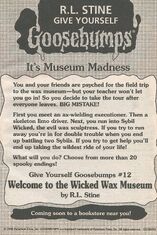 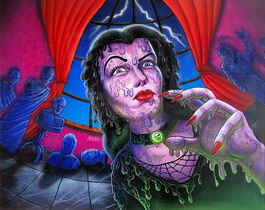 Retrieved from "https://goosebumps.fandom.com/wiki/Welcome_to_the_Wicked_Wax_Museum?oldid=113181"
Community content is available under CC-BY-SA unless otherwise noted.