The cover illustration depicts a large black-and-white snake and a small, striped pink snake coiling around a camp sign. Both snakes stick their forked tongues out.

Boone and Heather are psyched for summer camp. The legends of man-eating snakes and disappearing campers are hisss-terical! Sure, it's strange that the camp lotion makes their skin peel, but there's a good explanation, right? Right?

Things get even worse when Boone joins the other eleven Very Special -- AND Very Terrified! -- Guests at HorrorLand. There's something Very Wrong about a bumper-car ride called the R.I.P.P.E.R...

Boone Dixon and his younger sister, Heather, are on a bus, and they are going to Camp Hither. Boone sits next to a kid named Roddy McDonald. Roddy is nervous because some other kids scared him with stories about the scary camp. Roddy says that some people call the camp Camp Slither. When the kids get of the bus, they are greeted by a man named Dr. Crawler. Dr. Crawler introduce Boone and Roddy to a cabin counselor named Nathan. Nathan takes the kids to the nurse, and the nurse sprays the kids with an orange spray. The nurse says that the cans are filled with sun protection spray. Roddy tells Boone about a camp legend regarding a giant snake named Serpo.

Roddy goes on a hike without Boone. A while later, Nathan comes in and begins taking Roddy's stuff and says that Roddy did not like camp, so he is leaving. Boone and his cabin mates, Sid and Kelly, are surprised by this. Later, Boone leaves his cabin in search of the source of the loud hissing sound that he keeps hearing. Boone finds Heather, and they explore together. They find a building. Boone opens the door and finds a huge pile of mice. Boone begins to suspect that the mice are for Serpo and that Roddy was removed from the camp because he knew about Serpo. The door accidentally locks behind Boone, and he is unable to escape the building until his two cabin mates, Sid and Kelly, find him and unlock the door. Boone, Heather, Sid, and Kelly all go in search of Nathan. When the kids search inside the counselors' cabin, they find that the cabin is filled with snakes. The kids run away. The next day, the kids interrogate Nathan and ask why there were snakes in his cabin. Nathan says that the snakes crawled into his cabin while he was away.

Dr. Crawler and Uncle Jerry reveal that they had injected themselves with snake DNA, and the injections accidentally caused the men to turn into snakes every night. The men say that the snakes in the counselors' cabin were just the counselors in snake form. The two men say that they want to keep the kids for some experiments; the men want to create a formula that can fully turn them back into humans. Boone and Heather find out that the hissing sounds that they had heard earlier were the result of machinery from Dr. Crawler and Uncle Jerry's lab. The kids see Roddy, and they notice that he now has a forked tongue. Dr. Crawler and Uncle Jerry reveal that the orange liquid that the nurse had sprayed them with was snake DNA, and if the kids are shocked at the right frequency, they will turn into snakes. Dr. Crawler and Uncle Jerry electrocute Roddy, and he turns into a snake. Boone picks up Roddy and signals to his sister, subtly suggesting that she rattle her bracelets. When rattling, Heather's bracelets sound like snake rattles.

Since all of the counselors are gone, the kids phone their parents, and their parents pick them up. While on their way home, Boone gives Heather a gift because it is Heather's birthday. Boone hands Heather a small hissing snake.

Boone gets an invitation to HorrorLand in the mail. When Boone get's to HorrorLand, he sees multiple kids entangled in purple tendrils. Boone quickly becomes entangled in the tendrils when he tries to help. A Horror approaches and uses an silver tool to free the kids. The Horror takes the kids on a bus, and Boone meets Julie, Billy, Sheena, Matt, Carly Beth, Sabrina, Robby, and Abby. The kids ask the Horror where they are being taken, and the Horror tells them that he is taking them to the Keeper.

Boone pretends to be attacked by a snake. Boone's act is so convincing that he scares away the Horror's on the bus. The kids run to Good-bye Land. The kids go on a ride called the R.I.P.P.E.R. DIPPER; the kids want to go on the ride because the ride goes underground, and they want to get to into the HorrorLand tunnels. When the kids get underground, they are captured by several Horrors. The Horrors take the kids to Mondo's shop.

Inside the shop, there are stairs. The Horrors lead the kids down the stairs to a room where The Keeper is supposed to be. The Horrors leave and the kids are all scared by items in the room. The room contains the Haunted Mask, a mummy, a camera, and an oil painting of Captain Ben. Robby is terrified when Dr. Maniac enters the room and reveals that he is The Keeper. Soon, the Purple Rage enters the room. The kids learn that he is working with Dr. Maniac, and the kids deduce that all of their enemies were working together as a part of a group revenge plot. 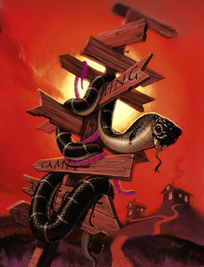