It's the little camp of horrors!

The Ghost Next Door
Welcome to Camp Nightmare is the ninth book in the original Goosebumps book series. It was first published in 1993.

Both the original and Classic Goosebumps cover illustrations depict a monster that might be Sabre looking through a tent near leafless trees.

THOSE SCARY STORIES ABOUT CAMP ARE ALL COMING TRUE...

The food isn't great. The counselors are a little strange. And the camp director, Uncle Al, seems sort of demented. Okay, so Billy can handle all that. But then his fellow campers start to disappear. What's going on? Why won't his parents answer his letters? What's lurking out there after dark? Camp Nightmoon is turning into Camp Nightmare. For real. And Billy might be next...

Billy is traveling on a bus to Camp Nightmoon. During the bus ride, Billy meets three fellow campers: Mike, Jay, and Colin. Billy also meets two members of the girls' camp, Dawn and Dori. When the bus stops, the driver ushers all of the kids off. Since none of the kids know where they are, Billy tries to ask the bus driver, but the driver speeds away. The kids see a group of wolf-like creatures standing upright. When the creatures try to attack, they are stopped by a man — later revealed to be the camp leader, Uncle Al — armed with a strange rifle. A second bus comes by and picks up the campers. The girls are dropped off at girls' camp, and the boys are taken to the boys' camp. Mike, Jay, Colin, and Billy are assigned to Bunk 4, and the four boys meet their bunk counselor, Larry. When Larry leaves the bunk, the four boys find snakes lying in one of the beds, and one of the snakes bites Mike's hand. Mike goes in search of the nurse, and the other boys remove the snakes from the cabin. Mike and Larry eventually return; apparently, the camp has no nurses.

The boys go to the campfire, and they are given food to eat. Uncle Al warns the kids not to be outside after curfew, and he instructs them to stay away from the Forbidden Bunk, an boarded-up bunk at the camp. Later, the boys head back to their bunk. Mike's hand continues to hurt because of the bite. The boys hear strange animal howls outside. Jay and another camper, Roger, decide to go to the forbidden bunk. Larry warns the boys not to go outside because a dangerous creature named Sabre comes out at night.

The following day, Larry guides some boys in a game of scratchball. During the game, Larry catches the ball. Billy sees an evil change in Larry's expression, and Larry throws the ball directly at Colin's back. Larry apologizes, saying the ball slipped. Colin is sent away so he can get help, and Mike goes with him because his arm is now swollen from the snakebite. Later that day, Billy and Jay write their parents' letters, which they have been instructed to do every day. Colin and Larry return; Colin is still seeing double, but Uncle Al says the boy is fine. Later, the boys go to the mess hall. Jay spills grape juice on Billy's pants, so Billy heads back to the cabin in search of a change of clothes. Billy opens up one of the drawers in the cabin, but it is completely empty! Billy quickly realizes that he's accidentally opened Mike's drawer. Billy runs back to the mess hall and asks Larry about Mike's whereabouts, but Larry refuses to give Billy a definitive answer.

That night, Jay and Roger sneak off in the hopes of exploring the Forbidden Bunk. After some time passes, Billy hears startling howls. He then hears Jay calling for help. Billy and the other boys come out to meet Jay. Jay says that he's being chased by Sabre, and the creature got Roger. The other boys manage to calm Jay, and they manage to fall asleep. The next morning, the boys go to the mess hall. They try to explain that Roger was attacked by a creature. Larry says that he didn't hear any reports of an attack or any screams the previous night. Later in the day, Uncle Al takes Jay to the Forbidden Bunk to investigate, and they find no trace of Roger. More shockingly, the boys are told that no boy named Roger was supposed to be at the camp.

While the other boys are swimming, Billy is pulled away Dawn and Dori. The girls sneaked away from the girls' camp because very strange things have been happening at the girl's camp; girls have been disappearing, but the counselors don't seem to care. Many of the girls have started calling Camp Nightmoon "Camp Nightmare" instead. The trio disbands. Billy, wanting to call his parents, heads to the pay phones. He touches one and quickly realizes that the phone is fake. Billy runs back to his bunk and tells Colin and Jay about Dawn and Dori, and they head to lunch. Later that day, Colin and Jay go hiking with a counselor, and Billy finishes writing a letter to his parents. He goes to the camp office to drop off his letter, but no staff members are there. Billy finds a mailbag. When he opens it, he finds that it is stuffed full of mail, including letters that he wrote previously. Evidently, no mail is being sent. Colin and Jay never return. When Billy goes back to his bunk, he finds new kids moving into Colin and Jay's spots. The next day, Billy tries to ask Larry about Jay and Colin, but Larry says that he doesn't know them. That night, Billy is awoken by Larry unexpectedly. Larry guides Billy into the woods, and they find a group of boys and Uncle Al.

Uncle Al provides the boys with tranquilizer rifles. He says that two campers have escaped from the girls' camp, and the boys will have to hunt them. Billy, suspecting that the escapees were Dawn and Dori, refuses to hunt for the girls. When Uncle Al leaps at him, Billy fires his rifle at him. However, Uncle Al laughs and says that Billy passed. Dawn, Dori, Billy's former bunk-mates, and Billy's parents emerge from the woods. Uncle Al explains that he has been the subject of a government test. Billy's parents, two scientists, will be going on an important trip, and they want to take Billy with them. Because of his age, Billy needed to pass certain tests in order to gain clearance to go. Because of his bravery and logic, Billy passed all of the tests. Billy's parents will be venturing to a far away planet to investigate the creatures that live there. The planet is called Earth. 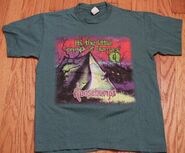 It's the Little Camp of Horrors Tie-Dye T-shirt. 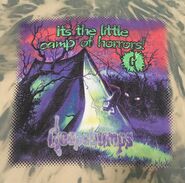 It's the Little Camp of Horrors T-shirt detail.

Welcome to Camp Nightmare was adapted into an episode of the Goosebumps TV series. It is the fifth (part one) and sixth (part two) episode of season one. 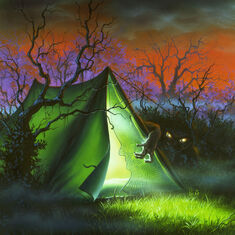 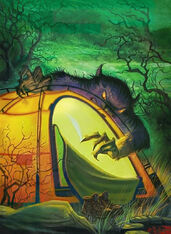