Weirdo Halloween is the sixteenth book in the Goosebumps HorrorLand book series, and the fourth book in the Chiller House arc. It was published in 2010.

The cover artwork shows Bim, an alien, trick-or-treating. He's on a porch, holding a Halloween bag that contains lots of candy.

After a trip to HorrorLand, Meg and her brother, Chris, can't wait to celebrate Halloween. Until that Weirdo in the baby alien costume shows up and begins to wreak havoc on their lives. They just can't seem to get him to leave. And Meg's beginning to suspect that his orange skin isn't a halloween disguise. . .

What happens in the world's scariest theme park on the most frightening day of the year? Meg is about to find out when she's mysteriously called back to HorrorLand on Halloween. Can she survive the trick or treachery?

Meg Oliver and her brother Chris are in HorrorLand, after having begged their parents to take them there. They go in the Tunnel of Screams, a tunnel where you have to listen to horrifying screams. At one point, Meg turns around to see Chris's skull, but it turns out to be someone else. A woman appears before them named Madame Doom, who tells them that the faceless boy might be a warning. She takes them into her tent, where Meg sees a doll that looks exactly like her.

Madame Doom vanishes and when they ask a Horror where she might be, he points them to a fortune telling machine that looks just like Madame Doom. When they put a coin in the dummy Doom, they just get an advertisement for Chiller House. They go there and after meeting Jonathan Chiller, Meg sees a strange doll that Chiller says is called a Floig, and it might be the only one of its kind on earth. She buys it, and Chiller says she can pay for it later.

Meg and Chris go home the next day, but their parents announce they will be away on Halloween for a business trip, leaving them in the care of their elderly babysitter, Penny. The night before Halloween, the two go out so they can attend a party and see what they think is a child in the bushes.

It seems to be too big to be a child, and it has orange skin. They help him and move on with their night. They go to their friend Kelly's party, where a package is tossed through he window that lets out a disgusting smell. After helping Kelly clean up the mess, Meg and Oliver get home to discover that the strange kid is there, revealing that the package was his doing. It was an "aroma message" he sent to tell the kids to come home.

His name is Bim, and he says he is from Weirdo Planet. Because they saved his life, Bim belongs to them now. The kids try to take off his mask, only to discover that it's not a mask and that he really is an alien. After he pukes up a dead bird, they demand that he leave and Bim warns them to not make his "feeling unhappy". He then turns into a monster with three rows of sharp teeth, which causes the kids to calm him down so that he turns back to normal.

He orders Meg to rub his back as to keep his feeling happy. He warns her that he will tear up Meg's collection and possibly eat the kids if they disobey, so she is forced to start rubbing his gross back. Bim soon falls asleep and Meg attempts to get some sleep with a disgusting weird alien making gross sounds in the same room. The next morning, Bim is gone and she thinks her troubles are over.

Meg goes to Kelly's house, only to find a dead rabbit in her room, which Meg suspects is Bim's doing. Meg leaves and bumps into her friend Carlos and tells him about Bim. He doesn't believe her but soon he follows Meg into her house where they both see Bim eating a dead squirrel. Carlos runs away, and Bim confirms that the dead rabbit was a "happy gift" to Kelly.

That night is Halloween, and Chris suggests they take Bim around town and lose him so they will be rid of him forever. Meg isn't sure about this plan until she sees that Bim has eaten her entire doll collection, and Bim announces that he plans to bring some friends from his home planet. Their plan seems to work, and on the way home they bump into Carlos and Kelly. They go up to Meg's room only to find that Bim has returned.

He explains that he used his Weirdo Tracking to find his way home. His feeling becomes very angry, so he turns into a monster and starts rampaging. Penny hears this and comes in, then starts yelling at Bim. She has bad eyesight so she can't tell he's a horrifying monster. Her yelling causes Bim's feelings to be hurt and he starts to deflate. The kids join in and it works too well, and he soon becomes a monster again. After they run around the house, they end up back in Meg's room where Bim tries to eat them.

Meg tries to throw some items at Bim to slow him down and this includes the Floig. Bim is happy to see it, as it turns that the Floig is a toy from his home planet that he came here to get. He forgot because space travel mixed up his mind. This makes him homesick and he finally leaves. They start to clean the mess he made, when three others weirdos beam in. They say Bim invited him there and they plan to stay forever and ever.

The kids tell the aliens that Bim left, so they leave. That night, the little Horror Chiller had given Meg starts to glow, and suddenly she finds herself back at Chiller House. Jonathan tells her that he brought to HorrorLand on Halloween to play a special masquerade game. He simply tells her to go outside and prove that "you are you". She leaves and a kid in a gorilla costume asks Meg if she's tried out The Haunted Pumpkin, which she assumes is a clue. It's an attraction that makes you feel like you're inside a giant pumpkin.

After trying it out, she leaves and sees some people in costume who asks her if she is wearing a mask. She thinks is also a clue and goes to the local mask shop. She gets a lizard costume, inspired by someone else she saw. After visiting a haunted house attraction, she finds the girl in the lizard costume. She takes off mask to reveal that looks exactly like Meg. She claims to be Meg and seems to confused as Meg 1 is.

Suddenly, Chris appears, and he explains that Chiller brought him here as part of the game. Meg pulls Chris aside and tries to prove she is the real Meg by having him quiz her. But Chris claims Meg gets each question wrong, and he has no idea what she's talking about when she mentions Bim. Chris leaves and Meg follows him and Meg 2 to a crowd of people in zombie costumes, as one of them tosses a doll that looks like Meg into a fire. She rescues the doll and wonders if it's the same one from earlier.

Meg tries to call home but only gets Chiller. She realizes she can use the phone to prove she is her, as it's as good as an ID. She tries to call him again but gets Meg 2 instead. She also discovers that all the contacts on her phone are gone. She finds Meg 2 at an attraction called The World's Most Dangerous Pumpkin, which has a catwalk above a giant pie. The Megs start fighting while walking on it, and they fall into the giant pie. They manage to escape from the pie, but Meg is no closer to proving she is the real Meg.

They go back to Chiller House and have Chris ask questions again. Meg 2 has the same answered Meg did earlier but this time Chris says they are right. Out of frustration, Meg grabs Chris by the ears, and they come off. This Chris is actually a robot and Chiller admits that Meg 2 is also a robot. When Meg entered the store, a detector scanned a memory and he put it in the robot. Chiller goes to the back room to get something when two horrors come in to take the robots.

They take Meg, mistaking her for the robot and ignore her cries for help. Meg is able to prove she isn't a robot by using a pin to make her bleed a little bit. They apologize for the mistake and leave. Chiller comes out and uses the toy horror to take her home. After talking to Penny in the kitchen, Meg goes to her room, only to see that Robot Meg is there. Robot Meg demands to know what Meg is doing in her room.

In Brandon Dorman's original artwork, Bim's skin is green and has purple eyes. However, when the book was released, his skin was changed to orange. The book was later reprinted with Bim's skin as green and his eyes changed from purple to orange. Other changes include the artwork being enlarged and a "SPECIAL EDITION" banner being added underneath the Goosebumps HorrorLand logo. 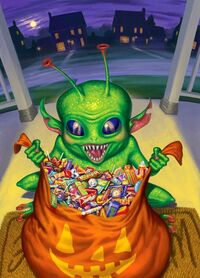 Alternative color variant of the final artwork by Brandon Dorman. 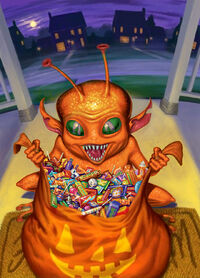 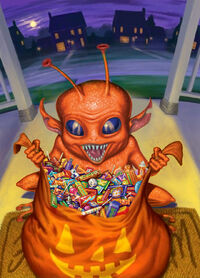 Retrieved from "https://goosebumps.fandom.com/wiki/Weirdo_Halloween?oldid=125646"
Community content is available under CC-BY-SA unless otherwise noted.