Trick or...Trapped!
Weekend at Poison Lake is the eighth and final book in Give Yourself Goosebumps: Special Edition. It was published in 1999.

The cover illustration depicts a swamp lake with a poison dart frog around the grass at its bank, as well as a blue swamp creature with webbed hands emerging from the murky waters.

COME ON IN ― THE WATER IS SLIME!

It’s the weekend and your family’s vacationing at an awesome lake. The water’s cool clear... and downright deadly!

Rumor has it this lake is filled with poison! Or are those aliens? And what’s that nasty smell? Better pick a lucky number to help you out, or this nature trip could really go wild! If you pick the right number you'll be chillin' on the beach without a care. But if your number's unlucky you'll come face-to-face with evil jewel hunters, ice-cream-craving aliens, and all sorts of freaky wildlife!

This book has four almost fully distinct main storylines. Rather than providing the reader with a choice in order to determine which storyline is followed, this book requires the reader to pick a lucky number. The lucky number is then employed at several points throughout the book, making the course of the story more random than voluntary. Which storyline you follow depends on the lucky number you choose (and thus, the page you first go to):

Your lucky number is 2. Your friend Nathan's parents are staying at Poison Lake, so Nathan invites you and your other friend Tamika to come along.The first thing you do is swim in the lake, but a neighbor warns you that swimming is not allowed because the lake really is poison. But being in the water makes you smell disgusting, and you can't shower off the stench. This storyline is based around you trying to get rid of the smell while surviving a bunch of creatures (insects, wolves, etc.) that are suddenly drawn to you because of it.

Your lucky number is 3. You go on a family vacation to Poison Lake. Your parents have heard the lake is dangerous, so they ban you from the water. But your bratty little brother dares you to swim in the lake, and you do it. Your skin turns green and luminous, and then a spaceship appears in the sky above you. You have been poisoned by the water and need to get an antidote from the aliens, but they will give it to you only if you can get an ice cream company's secret recipe.

Your lucky number is 4. You're staying at Poison Lake with your family, who have been warned that the lake is poisonous. An old lady tells you that this isn't true. Jewels were hidden in the water after a robbery, and a couple who had witnessed the robbery (the Bittermans) made up the story about the lake being poison, so they could get the jewels for themselves. You decide to search the lake for jewels, but you're in danger from both the Bittermans and the horrors that await you in the lake.

There are thirteen bad endings and ten good endings. 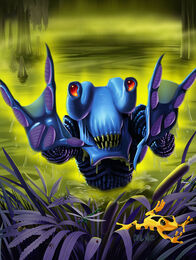 Retrieved from "https://goosebumps.fandom.com/wiki/Weekend_at_Poison_Lake?oldid=146033"
Community content is available under CC-BY-SA unless otherwise noted.