Vampire Breath is the forty-ninth book in the original Goosebumps book series. It was first published in November of 1996.

The original cover illustration shows Count Nightwing briefly emerged from his coffin with dead flowers in his left hand and a bottle of Vampire Breath in front of his coffin.

Tough. That's Freddy Martinez and his friend, Cara. They're not afraid of anything. But that was before they went exploring in Freddy's basement. Before they found the secret room. Before they found the bottle of Vampire Breath. Poor Freddy and Cara. They should have never opened that bottle of Vampire Breath. Because now there's a vampire in Freddy's basement. And he's very, very thirsty....

Freddy Martinez and Cara Simonetti are babysitting Tyler Brown, a six year old. Freddy enjoys tormenting Tyler with stories of werewolves. Freddy hears someone coming through the front door and convinces Tyler that a werewolf is entering the house, but the werewolf is actually just Tyler's parents. Freddy and Cara get paid for babysitting, and they head back to Freddy's house. Freddy and Cara play air hockey in the basement, and Freddy's parents aren't home. Freddy and Cara begin fighting, which results in Freddy bumping into a wooden cabinet. The cabinet falls over revealing a previously hidden door in the basement wall.

The kids open the door, and they find a stone walled tunnel. The kids find a flashlight in the basement, so they decide to explore the tunnel. The two friends find another door, and Freddy opens it. Freddy and Cara are shocked to find a coffin. In order to prove their bravery, the kids open the coffin. They find a strange bottle labeled Vampire Breath. Freddy tries to grab the bottle from Cara, causing her to drop the bottle, which results in the stopper flying out. Sour smelling mist pours out of the bottle. Freddy puts the stopper back in, and he notices something has appeared in the coffin: an elderly, bald man dressed in old fashioned clothes. Suddenly, the man opens his eyes.

The man sits up and reveals himself to be Count Nightwing, a vampire. Count Nightwing complains that he's thirsty. The two kids run back down the tunnel. The kids see the door to the basement slowly close in front of them. The vampire catches Cara. The Count is going to drink Cara's blood until he realizes his fangs are gone. The Count asks for his bottle of Vampire Breath. He says the bottle can take him back to his time. The Count forces the kids to look for the bottle. When they find the bottle, the Count opens it, unleashing a green mist. The vampire quickly disappears, but the kids are startled to find that they aren't in the same room as before. They are now in the room of a castle surrounded by multiple coffins. Cara deduces that Count Nightwing took them back to his time.

The coffins around the kids begin opening, revealing many vampires. Count Nightwing approaches the kids and reveals he doesn't know how to send them home except for by turning them into vampires. Count Nightwing leaves in search of more Vampire Breath. He reveals that vampires must have it to stay alive, and it can bring his fangs back. Cara believes that they need to find the Vampire Breath before the Count. The kids explore the castle. They break a window and crawl onto a ledge with the hope of escaping. Freddy falls, but he is saved by a bat. Once inside, the bat turns back into Count Nightwing. The Count warns them not to try to escape again before leaving again.

Freddy and Cara find a coffin, which they open. They find a bottle of Vampire Breath inside. The two friends are approached by a young looking girl. The girl says that her name is Gwendolyn, and she says that the Count forces her to do work around the castle. Gwendolyn leads the kids down a long tunnel and into the cellar. She stops suddenly and explains that she is actually a vampire, and she is thirsty. Cara suggests that Freddy use the Vampire Breath to transport them to the future. Freddy opens the bottle, but finds that its empty. Count Nightwing approaches. Gwendolyn and Count Nightwing begin hissing at each other, allowing Freddy and Cara to escape. Still in the cellar, the kids finds a shelf filled with Vampire Breath bottles. Count Nightwing finds the kids and says that only one bottle is full. All three begin searching for the bottle.

Freddy says that he found the bottle. Freddy and Cara begin tossing the bottle back and forth, keeping it away from the Count. When the Count retrieves the bottle, he opens it, only to discovers that it is empty. Freddy realizes that he had grabbed the wrong bottle. Freddy grabs another bottle that he thinks is full, and he tosses it to Cara. The Count tries to grab the bottle, but it falls to the floor. Putrid gas pours out. Before long, the kids find themselves back in Freddy's basement. Count Nightwing is frightened to find that he has been transported forward in time with them. Freddy's parents enter the basement, but they don't seem disturbed by the vampire.

Count Nightwing recognizes Freddy's mom, and Mrs. Martinez addresses the Count as her father. She introduces Count Nightwing to Freddy; the Count had slept for so long, that he hadn't met his own grandson. The Count complains that his fangs are gone, but Mrs. Martinez says that his dentures are in a glass in the basement bathroom. Mrs. Martinez retrieves the dentures and hands them to the count. Shocked by all of this news, Freddy asks if he's a vampire. His mother says he is, but his fangs haven't grown in yet. The three adults agree to look for something to drink. They all turn into bats and fly away.

Freddy decides to explore the basement's bathroom further to see if there's anything else strange inside. He finds a bottle labeled as Werewolf Sweat. Freddy accidentally opens the bottle, and a strange liquid pours out onto both Freddy and Cara. Freddy is worried about what the substance will do. Suddenly, he hears Cara beginning to growl.

Vampire Breath was adapted into an episode of the Goosebumps TV series. It is the seventeenth episode of season two, and the thirty-sixth episode overall. 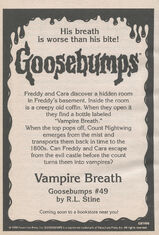 Book advertisement from Attack of the Jack-O'-Lanterns. 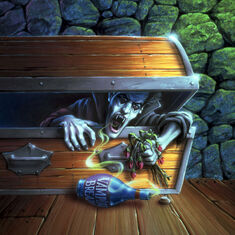 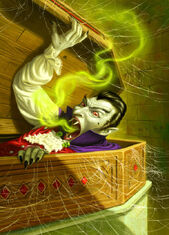 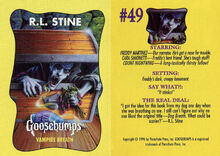 Retrieved from "https://goosebumps.fandom.com/wiki/Vampire_Breath?oldid=124337"
Community content is available under CC-BY-SA unless otherwise noted.