Under the Magician's Spell is the seventh book in the Give Yourself Goosebumps gamebook series. It was published in 1996.

The cover illustration consists of a person inside a magician's box that was sawed in half. A hat with a rabbit popping out of it was on the stage next to the box.

IT'S A LITTLE CHOP OF HORRORS!

If you read one of the spells, you find yourself in the magician's workshop. Suddenly you are part of a magic act. You are forced onstage, about to be sliced into a million pieces!

If the three bullies from the school grab the book, you must find it before the magician makes your sister disappear...forever!

You meet your friend, Sid, at the mall and have to drag your little sister, Joanie, along. Joanie runs inside a magic shop and Sid winds up handcuffing his hands together inside the store. The shopkeeper, who calls himself "The Magician" informs them that there is no key for the handcuffs and mysteriously disappears. You furiously drag Joanie out of the shop when you discover that Joanie was holding an old book of spells. Sid suggests that you use one of the spells to get the handcuffs off.

You decide to use the spellbound but wind up on stage during a magic show as The Magician prepares to throw knives at you, make evil rabbits come after you, put you inside a box and put swords inside, or saw you in half.

You tell Sid to not try any spells and go back to the clubhouse and try to use regular tools to get the cuffs off, but three bullies from school take the book and The Magician forces you to get it back... by making Joanie slowly disappear as leverage!

There are twenty bad endings, one ambiguous ending, and two good endings.

German (Ver. 1) (Im Bann des Magiers - Under the Spell of the Magician)

German (Ver. 2) (Im Bann des Magiers - Under the Spell of the Magician) 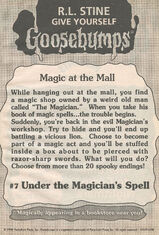 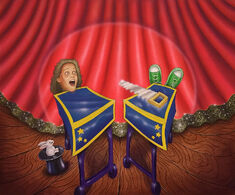 Retrieved from "https://goosebumps.fandom.com/wiki/Under_the_Magician%27s_Spell?oldid=131863"
Community content is available under CC-BY-SA unless otherwise noted.