Weekend at Poison Lake
Trick or...Trapped! is the seventh of the special editions of Give Yourself Goosebumps. It was published in 1999.

The cover illustration depicts a house with Halloween decorations in the windows and bats flying in the night sky. In the foreground, there is a orange-and-blue gorilla-like creature holding a bowl of candy.

NO TREATS ON THIS STREET!

Sunshine Court is the best spot for trick-or-treating this Halloween, and it’s all yours! Your mouth starts watering just thinking about all that candy...

But you better save your spit. There are no treats here! Instead, the five little houses are full of horrible tricks! Now you have to collect the right items to find your way out! Choose your house and your weapons wisely—or you could do battle with angry elves, aliens shaped like your parents, or the freezing Arctic...

You are in a rich area of town, trick-or-treating, and are told that the owner of a mansion will give out the best candy if visited. Your initial choice is to visit one out of five houses all of which are blocking the entrance to the mansion, then survive whatever is inside. You will then either be able to enter the mansion or will have to choose another house. There is an item check in this book, and having certain items will effect some of the choices made throughout the story.

There are twenty-one bad endings and six good endings. 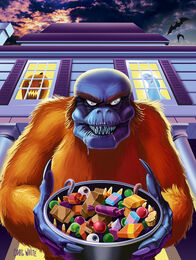