Goosebumps Wiki
Register
Don't have an account?
Sign In
in: Books, Give Yourself Goosebumps Special Edition, Animals,
and 7 more

One Night in Payne House
Trapped in the Circus of Fear is the third special edition book of the Give Yourself Goosebumps gamebook series. It was published in 1998.

The cover illustration depicts an evil clown grinning while juggling skulls. A large top circus tent is behind him.

IT'S THE SCARIEST SHOW ON EARTH!

You did so well at Circus Camp, you're allowed to join a real circus for a week. But it turns out to be a Circus of Fear!

Meet the Girl with Five Tongues and the Kid with Rotten Flesh. These sideshow freaks used to be normal kids—until the evil ringmistress got hold of them. And now she’s after you. You'd better destroy her evil powers—before she turns you into the Kid Who Lives in a Jar!

You and your friend, Richie, do a great performance during your time at a circus camp. As a reward, both of you are invited to participate in a real local circus. However, once you both arrive you find yourselves at the mercy of the sinister Mistress Barbarous and her circus crew who either want you dead or as permanent sideshow attractions. It's up to you to save Richie and the sideshow freaks, defeat Mistress Barbarous, and escape the circus.

Being a special edition "Power Play" story, at the beginning of the book, you must choose only three out of eleven items take to the circus that'll determine your survival. 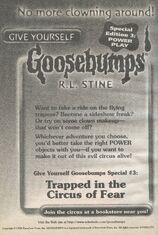 Book advertisement from Revenge R Us. 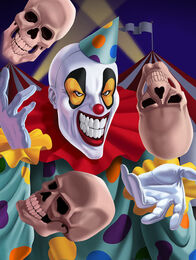