Toy Terror: Batteries Included is the twentieth book in the Give Yourself Goosebumps gamebook series. It was published in 1997.

The cover illustration shows Nasty Kathy, a vicious doll with a pink dress and razor teeth, breaking out of her box. Nasty Kathy was reaching up with her fingers with her pull-string out. Some of the other toys on the shelves appeared to be watching this happen.

Wind Them Up and Watch Them Go... Wild!

Great news! You've won a contest! You get to choose between two really cool prizes: a toy robot or a tour of the Hasley Toy Factory.

If you choose the tour, watch out for the Nasty Kathy. She's a living doll with a bad attitude—and she doesn't like nosy kids like you! Maybe you'd rather choose that toy robot, the Annihilator 3000. You love hi-tech stuff. At least, you thought you did. But now the Annihilator 3000 is using its laser beam to wreck your house! How will you stop it—before it goes after you?

If you choose to attend the tour, you get locked inside. Watch out for the toys — they come alive at night. Rumor has it that they are plotting something top secret. And you especially want to watch out for Nasty Kathy. She's a dastardly doll with a bad attitude — and she doesn't like you!

If you decide to skip the tour, the other prize you get is a kid-sized robot called the Annihilator 3000. You're into advanced technology — or so you thought. Right after you get it, the Annihilator 3000 starts going on a rampage and starts destroying your home! How are you going to stop it — before it starts coming after you?

Book advertisement from My Best Friend Is Invisible.
Add a photo to this gallery 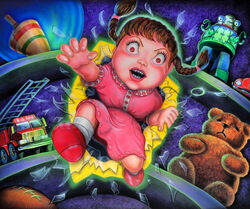 Retrieved from "https://goosebumps.fandom.com/wiki/Toy_Terror:_Batteries_Included?oldid=114631"
Community content is available under CC-BY-SA unless otherwise noted.