Escape from the Carnival of Horrors

Tick Tock, You're Dead! is the second book in the Give Yourself Goosebumps gamebook series. It was published in 1995.

The cover illustration consists of a mean looking face in a clock and someone hanging off one of the clock hands.

B-O-R-I-N-G. That's how you'd describe your family vacation in New York City. Instead of visiting all the cool spots, like Rockefeller Center and the Statue of Liberty, your parents drag you to a bunch of stupid museums.

Then, at the Museum of Natural History, something really strange happens. You accidentally get involved in a strange experiment that sends you traveling through time!

Will you duel with knights at a medieval castle? Come face-to-face with man-eating dinosaurs? Or take a ride through outer space? The choice is yours in this scary GOOSEBUMPS adventure that's packed with over 20 super spooky endings!

You are vacationing in New York City with your parents and your brother, Denny. You could care less about visiting the Museum of Natural History. Especially with your little brat of a red head younger brother running around and wreaking havoc! When Denny runs into a private workshop department, the scientist there tells you that he has invented a time machine, and tells you that you can be the first person ever to travel through time! However, Denny runs inside, and gets lost in an unknown time period. You can go to prehistoric times, where vicious dinosaurs roamed, or the medieval times, battling wizards, dragons, and knights, or the future, where evil robots control humans. One thing is for sure, you will have to find Denny in two hours, or he will cease to exist!

You look for Denny in the past and have to survive prehistoric or medieval environments. There is only one way to get a good ending to this storyline, and it is also possible to move to Story B.

You look for Denny in the future, ending up in a distant world where humans are ruled over by evil robots that you need to escape in order to survive.

From story B, you travel only one day into the future and learn that tomorrow, your whole family will be killed by an out of control truck. You now have to alter time to prevent this from happening.

There are twenty-three bad endings, one ambiguous ending, and three good endings. 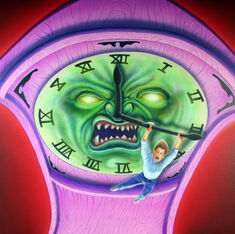 Retrieved from "https://goosebumps.fandom.com/wiki/Tick_Tock,_You%27re_Dead!?oldid=124703"
Community content is available under CC-BY-SA unless otherwise noted.