The Worms are the main antagonists in the twenty-first Goosebumps book, Go Eat Worms!, and its television adaptation.

Todd Barstow is obsessed with worms. He even has a worm farm in his basement. Todd and his best friend Danny, love using worms to scare others, especially Todd's sister, Regina. One day while Todds digging for worms. He feels tremors coming from the ground believing it to be an earthquake. A few days later, while adding more worms to his collection. He cuts a worm in front of his sister to gross her out but Regina points out something strange: the worms appear to be watching Todd. Regina says that the worms might be planning they're revenge.

A few days later he finds worms in various of his things such as his cap, cereal bowl, and his sandwich. Todd then suspects that some worms may be escaping so he checks his worm farm in the middle of the night which causes his parents to get upset and tell them that they're going to throw his worms out.

The next day, Todd overhears Regina telling Beth that she was the one putting worms in Todd's things. Furious, Todd goes to the baseball field to find worms after school. Suddenly, Todd feels another tremor but this time the ground ends up splitting open, releasing a giant worm as thick as a tree trunk that attacks Todd attempting to pull him underground. Todd speculates that the giant worm must be the mother worm and is trying to kill Todd for revenge. Regina and Beth pass by holding a papier-mâché robin which scare's off the mother worm into going back to the ground, Leaving Todd unharmed.

The worms as depicted on the UK cover of Go Eat Worms!. 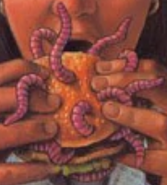 The worms as depicted on the French cover of Go Eat Worms!.
Add a photo to this gallery

A worm being dissected.

Add a photo to this gallery
Retrieved from "https://goosebumps.fandom.com/wiki/The_Worms?oldid=128478"
Community content is available under CC-BY-SA unless otherwise noted.