Slappy New Year!
The Wizard of Ooze is the seventeenth book in the Goosebumps HorrorLand book series, and fifth book in the Chiller House arc. It was first published in 2010.

The cover illustration depicts the Ooze. The Ooze is in the shape of a man wearing a torn, green shirt, holding a wooden staff that emits electricity.

"This Is a Very Limited Edition"

Marco is a diehard fan of The Ooze, a comic book villain with the power to sludge his enemies. So when he finds a super-rare edition at the Chiller House gift shop, Marco is sure he has found something special for his collection.

Outside of HorrorLand there are a few other people interested in the comic book. The kinds of people you don't want to mess around with. Like a muscular monster of a man dressed as The Ooze. But if he's only wearing a costume, why does he leave an oily mess everywhere he goes? And why is he following Marco?

Marco Gonzalez and his friend Gabriela Grant are visiting HorrorLand when they discover an area for games called the Play Pen. A man named Winner Taikal approaches the kids, offering to show them some "real games". They follow him down a tunnel to his private game room, where they first play a game of tug-of-war against an invisible opponent where the rope turns into a snake.

They lose but get a consolation prize in the form of a discount off any item at Jonathan Chiller's shop. They leave and meet a Monster Police officer who claims there is no one named Winner Taikall in HorrorLand. They visit Chiller House, hoping to find a gift for Marco's brother Zeke, who was too sick to join them. He finds a graphic novel about his favorite comic book super-villain, The Ooze, called The Wizard of Ooze. He is eager to get it as it is a limited edition he had never heard of before, and Jonathan tells him it has a special section that can teach you how to become a superhero. He gets it, as Jonathan tells Marco he can pay for it later. He gives him a toy horror, saying to "take a little horror home with you".

Back at home, Marco starts to read the section about getting super powers. The book gives him instructions on how to fly, which include putting yeast on your head and two bird feathers in your pockets. This works but only for a few seconds as soon Marco is sent back down. His parents see the aftermath but he claims he is working on a science project. Next he tries super strength, as he must wrap himself in plastic kitchen wrap. But it still only works for a few seconds. Before he can try out another one, Gabriella calls to remind him that today is the day they're supposed to go to a comic book convention. They go there where they explore the booth dedicated to The Ooze.

Marco notices they don't carry The Wizard of Ooze and when he mentions this out loud, a man guarding the booth approaches him. He introduces himself as Sammy and when Marco says he had the book, he asks if Marco could sell it to him. Marco declines his offer because he wants to see if he can still get superpowers from the special section. Marco turns around and bumps into someone dressed as The Ooze, who says he'd love to get his hands on Marco's special edition book. He warns him that he won't always be in a crowded place and that he has ways of persuading the kid. Marco and Gabriella get on the bus to go home and discover that the man in the Ooze costume is in the back row. They get off before he can do anything to them.

Marco goes home to try out another superpower, this time wanting to see if he has water powers. He has to fill a bath tub with ice cubes and yet again, this only gives him powers for a few seconds. He wants to go back to the convention to see if Sammy knows why the powers only last for a brief time, but he has been grounded for getting itno an argument with Zeke. When his parents go out, Marco sneaks out, with Zeke tagging along. The man in the Ooze costume is there, demanding that Marco hands over the graphic novel. He appears to have real ooze powers which he threatens Marco with. Marco eventually agrees to hand it over but Zeke had the book and he has vanished.

The Ooze gets distracted by some kids asking for an autograph, which allows Marco to escape and bump into Zeke. They're about to run home when a man covered in flames appears and takes the book from them. They go home but that night, The Ooze gets into his room and demands he hand over the book. Marco tells him that it was stolen but he doesn't believe him. He leaves when he hears that Marco's parents are coming, and he has to lie about why the room is such an oily mess. Soon after, the man covered in flames arrives, asking for the book even though Marco saw him take it earlier. He's able to hold him off with a fire extinguisher, and the flaming man retreats.

The next day after school, Marco plans to meet Gabriela in the alley behind the Dairy Freeze, when The Ooze shows up yet again. Marco lies and says he got water powers from the book and that he is called Tidal Wave. Marco tries to summon his powers and this actually works, but once again only for a few seconds. Because Marco has powers, The Ooze has to abide by The Code of the Superpowers and give him a second chance. He reveals that the flaming man is actually Sammy, known as The Fabulous Flame.

He needs Marco to use his water powers to put out his flame and get the book back. They go to Sammy's house where he pretends to be a normal average guy. Marco pretends to be The Fabulous Flame's biggest fan to distract him while he summons his wave powers, but he misses his target before the 10 seconds are up. Marco is able to take out his flame with a nearby hose. The Ooze thanks him for taking care of The Fabulous Flame but he goes back on his deal, having made up the Code of the Superpowers.

Gabriella appears and reveals she read the book on the way home from Horrorland and memorized one of the superpower sections, and plans to take out The Ooze with tornado powers. She activates them but yet again they only last for 10 seconds. The Fabulous Flame springs back to life, and before they can get both oozed and flamed, Zeke appears. Zeke shows off a bookmark that was in the book, and he reveals that this is what the villains have been wanting. Zeke tells them that the bookmark has tiny type that you must read for the powers to be permanent. Because they never read it, they only lasted 10 seconds. The villains want it to make their powers even stronger.

Zeke got Anti-Gravity powers from the book and he uses them to make the supervillains fly far away. Back at home, Marco wants to get the bookmark to make his powers permanent but Zeke catches him sneaking into his room and uses his power to stop him. He lets Marco down and his parents once again catch him in a uncompromising position, that he once again passes off as another science project.

Marco is forced to promise to not try to take the bookmark again. He is about to put the book away when he sees his little Horror glowing. It teleports him back to Jonathan Chiller's shop, where he says it's time to pay. 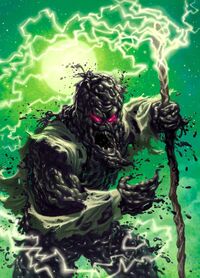