The Werewolf of Twisted Tree Lodge

It's Only a Nightmare!
The Werewolf of Twisted Tree Lodge is the thirty-first book in the Give Yourself Goosebumps gamebook series. It was published in 1998.

The cover illustration depicts a werewolf sitting in an armchair in front of a fireplace reading a book. The werewolf is wearing a white-and-red striped shirt and black pants with a plaid blanket on its lap.

"The Revenge of the Werewolves" — that’s the title of your horror story that just won first prize. Too bad you didn’t actually write it. Too bad you decided it would be a good joke to turn in the story you found in the trash. Because now the joke is on you!

When you go to collect your prize — a weekend with famous horror writers at Twisted Tree Lodge — you discover that these writers tell only true horror stories. Like the one about the kid being chased by a pack of ferocious werewolves! That means run! Before you really have something to howl about!

You awaken on a bus, as the driver announces you have reached your stop, the titular Twisted Tree Lodge. You note that you are the only passenger on the bus and back-story information explains that you have won a writing competition for writers with a story called "Revenge of the Werewolves".

The prize is to attend a horror convention, which only famous writers could attend. The only problem is that you won under false pretenses. You never actually wrote anything... You actually found an un-signed story and wrote your name on it, as a joke and then accidentally lost it before you could even read it. Somehow it won the competition but you're left feeling guilty suddenly, considering you did not really earn it. The bus driver does nothing to ease this guilt, either...

As you approach the front door, an odd man wearing all black, along with a black hat obscuring his face and carrying a black briefcase emerges from the shadows! His briefcase flies open and pages flow out of it and into the wind. They all float to your feet and you realize all of the pages belong to some horror story. You try to call the man over, thinking he must be one of the writers, when he suddenly vanishes!

You look at one of the pages to realize it's the same story you inadvertently plagiarized. The story is about a child who arrives at a lodge after winning a competition and sees a man drop his story from a briefcase. Are you in this story right now? You check a few other pages and read how everyone in the lodge is now in danger, because their creations will come to life to take revenge on them for how they have been portrayed in the stories. You decide it is probably a coincidence but you decide you better find that man and return the missing pages to him.

As you prepare to go into the lodge you notice the man in black walk past a group of hedges and you call to him. But again he does not hear you and now you must decide to go in or follow the man...

You choose to enter the lodge instead of trailing behind that mysterious man and notice how empty the lodge is. But someone had to let you in, so you search the rundown lobby for any signs of life. At the front desk you ring the bell, but nothing happens. When you do it again someone suddenly grabs your arm and tells you not to do that, since you do not want to let others to know your here. The boy who stopped you is named Corey, who is also both an accidental cheater and competition winner.

After some chatting, both of you realize that neither of you had a chance to confess your guilt when you both hear voices and quickly hide in a cupboard under the stairs. Corey explains that something strange is going on at the lodge and all of the writers have been lured here for some reason. He believes the two of you should hide until thinking of a plan. While choosing to leave introduces you to three famous (fictional) writers.

But it does not take you too long to realize how dangerous this place is...

You decide to follow the man in black so that you can return the manuscripts. But when you go the direction he did, you cannot find him at all! You see more pages on the ground and examine them. Then you notice a boy climbing out of the window from the lodge. The boy tells you that he is trying to escape and someone locked him in his room. You ask the boy about the mysterious man and the boy points to him, who is now leaning out of the window.

From story A, you leave the closet and don't go back to check if Corey is OK. You are introduced to the three writers, who each turn out to be a different type of monster that they write about. Because the story submitted in your name was about werewolves, the writers believe that you are a werewolf, and you have to find a way to escape without them knowing that you're completely defenceless against them.

There are eighteen bad endings and seven good endings. 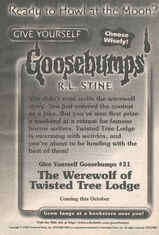 Book advertisement from One Night in Payne House. 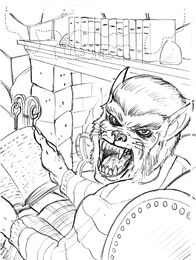 Conceptual artwork by Craig White.
Add a photo to this gallery

Retrieved from "https://goosebumps.fandom.com/wiki/The_Werewolf_of_Twisted_Tree_Lodge?oldid=152879"
Community content is available under CC-BY-SA unless otherwise noted.