Who's afraid of the big, bad wolf?

You Can't Scare Me!
The Werewolf of Fever Swamp was the fourteenth book in the original Goosebumps book series. It was first published in 1993.

The cover illustration features a wolf howling at night in a green fogging swamp while next to a torn shirt and a cap.

WHAT BIG TEETH YOU HAVE!

There's something horrible happening in Fever Swamp. Something really horrible. It started with the strange howling at night. Then there was the rabbit, torn to shreds. Everyone thinks Grady's new dog is responsible. After all, he looks just like a wolf. And he seems a little on the wild side. But Grady knows his dog is just a regular old dog. And most dogs don't howl at the moon. Or disappear at midnight. Or change into terrifying creatures when the moon is full. Or do they?

Grady Tucker and his sister, Emily, are forced to move to Fever Swamp in Florida because of their father. Their father is a scientist attempting to study the effects of a Floridian swamp's environment on a group of deer, which he keeps in a pen outside of his family's new house. The siblings decide to explore the swamp, but they quickly become lost. Eventually, they come across an old shack. The two enter to see if there's anyone inside who can help them. However, they are scared away by the crazy looking hermit that lives there. The kids run home to tell their parents what happened, and their father tells them that the old hermit was purely harmless.

That night, while Grady is hanging out by his family's new house, he is befriended by a local boy named Will Blake. As Grady learns from Will, the only other local kid close to their age is a strange girl, but Will doesn't elaborate on this. Will also tells Grady about how the swamp was named. According to him, many years ago, the residents of the swamp all came down with a terrible fever. The fever caused madness or death in everyone who had it.

Eventually, the boys part ways, and Grady goes back inside. At night, as Grady tries to sleep, he hears howling coming from somewhere outdoors. The following morning, he decides to go outside. A dog jumps out at him, but it appears to be friendly. Grady's father allows him to keep the dog, and Grady names it Wolf because it looks like it might be part-wolf. The Tuckers decide that Wolf was probably the one causing the noises they heard last night. Later, Grady and Will explore the swamp, and Wolf follows. The kids find a dead heron, which they are puzzled by. Grady goes home. That night, Grady and his family are awoken by a crash from within the house. It turns out that Wolf was running about and bumping into things. The family doesn't really have any other choice aside from letting the dog outside, which they do.

The next day comes, and Grady goes outside. Wolf returns, but Grady is shocked to discover a badly mutilated rabbit by their home. His family is quick to blame Wolf, but Grady defends his dog, not believing that he was the culprit. Later in the day, Grady meets Cassie O'Rourke, the strange local girl that Will mentioned. Cassie tells Grady about the werewolf of Fever Swamp, explaining that the swamp hermit is a werewolf. Then, the children are approached by the hermit. Wolf growls at the man. The hermit's shirt is covered in blood, he's carrying a dead turkey, and he cries out, claiming to be the werewolf. The kids try to run away, but the man catches up to them. The hermit admits that he had been hunting and had wanted to play a joke on the kids. Before separating, the old man warns Grady about trusting Wolf.

That night, Grady hears something loud happening outside. As is discovered later, one of Dr. Tucker's deer was killed in its pen by an unknown creature. Dr. Tucker believes that Wolf is the problem, and thinks he should be dealt with. When Dr. Tucker reveals his plans of taking Wolf to the pound, Grady sets the dog free into the woods. Grady doesn't see Wolf again until that night, when he sees the dog roaming nearby the house, so he goes to investigate. Grady quietly sneaks outside. In the swamp, he discovers that Will is also sneaking about. Will says that he was investigating some howling that he heard. Grady tries to stick with Will, but he loses track of the boy. Suddenly, a werewolf jumps out at Grady. As the creature attacks, Grady recognizes the distorted, monstrous face, thick neck, and broad shoulders. He can tell that the werewolf is Will. The monster bites Grady, but Wolf appears and attacks Will, scaring him off. Grady falls unconscious.

When Grady regains consciousness, he's back home. As he learns, the swamp hermit carried him back to safety. Grady tells his father about what happened in the swamp, so Dr. Tucker decides to check up on Will. When he goes to the house where Will is supposed to live, he finds the house unoccupied.

A month passes, and Grady is staring up at a full moon. When Will bit him, Grady became a werewolf. Now whenever there is a full moon, Grady goes hunting in the swamp. The book ends with Grady running side by side with Wolf into the swamp.

The Werewolf of Fever Swamp was adapted into a two-part episode of the Goosebumps TV series. It is the eighteenth (part one) and nineteenth (part two) episode of season one.

The Werewolf of Fever Swamp was adapted into a Goosebumps Graphix story in September 2006 by Gabriel Hernandez, as the first story in Creepy Creatures. 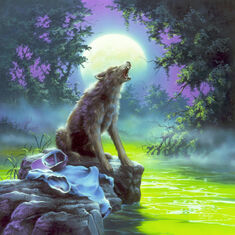 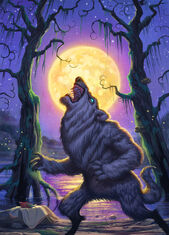 The original printing of this book included a 1994 calendar tear-out.