Goosebumps Wiki
Register
Don't have an account?
Sign In
Advertisement
in: Books, Goosebumps Series 2000, Books Released In 1999,
and 7 more

Horrors of the Black Ring
The Werewolf in the Living Room is the seventeenth book in the Goosebumps Series 2000 book series. It was published in 1999.

The cover illustration depicts a werewolf wearing ripped clothes and drooling, sitting on a green couch with a remote control in its hand.

Aaron Freidus' mother died two years ago, leaving him under the sole care of his father. He believes werewolves are real and considers himself a werewolf hunter. He is the sheriff of their town, so no one makes fun of him and instead Aaron is a target of mockery. Aaron's father has brought them to a forest in the European country of Bratvia to find a real werewolf. After waking up from a bad dream, he checks his dad's tent to find that he is gone. He hears footsteps and goes out to look for them but bumps into a werewolf, who bites him.

Aaron wakes up back in his tent, as his father managed to chase the werewolf away. He's excited to finally have seen a werewolf and plans to capture it. The werewolf returns that night and Dad chases after it. He can't find it but the werewolf leaves behind a pendant that has a tooth attached to it.

The next morning, they go out to look for the werewolf, but Aaron gets lost and ends up at a cabin that an old woman is living in. She explains that the forest used to be safer, until a stranger arrive that turned out to be a werewolf. Everyone who has tried to capture him has not survived. She offers to tell him his fortune but she spots the tooth pendant and warns him that it's the mark of a werewolf. She forces him to leave, and Aaron is attacked by some wild dogs. The tooth manages to ward them off.

Aaron finds his dad, as he has captured a middle aged balding man, that he claims is the werewolf. The man's name is Ben Grantley and he says he is merely a trapper, who hunts bears. Dad saw the werewolf's footprints lead to Ben's shack, so he's sure he has found a werewolf. Aaron isn't as sure. They board a ship headed back to America and that night, a storm hits and Aaron falls into the ocean but Ben saves him. Aaron is now certain Ben is an innocent man but his father is still sure he's a vicious werewolf.

Aaron starts to feel sick, as he realizes he never told dad about being bitten by the werewolf. He finds a patch of brown fur on his shoulder. He tries to tell Dad but he's busy talking on the phone, so Aaron decides not to do so, figuring it's no big deal.

They take Ben back home, just a day before a full moon. Aaron's best friend Ashlee begs him to show her the werewolf and is disappointed to find out it's just a middle aged man, thinking Aaron's dad is insane. The next day, Ben begs Aaron to let him free and he does so, and Ben promises that Aaron made the right choice.

Aaron tells his dad when he gets home about this and Aaron is promptly grounded. That night, he gets up to get a snack and discovers he has turned into a werewolf. He blacks out and wakes up the next morning, thinking it was a dream. He sees a report on the news saying two girls were attacked by a wolf creature last night. He goes back to his room and finds his clothes, shredded and covered in blood. Aaron is the werewolf.

His Dad has left to take care of the town's werewolf worries, so Aaron is unable to tell him the truth yet. He boards the windows and ties himself to the bed so he won't get out that night. This fails and he escapes into the night. The police spot him and give chase. Aaron manages to hide but he is soon found. Thankfully, his dad saves him before the cops can shoot. He knew it was him because he was wearing the tooth pendant. Morning breaks and Aaron turns back to normal, but the police still want him arrested for his werewolf crimes.

Dad refuses to hand over his son, hoping he can find a cure. They back down, as dad promises to reign Aaron in and devote his life to finding a cure. On the ride home, he apologizes for being too obsessed with werewolves to care for his son.

When they get home, dad gets a call saying a werewolf attacked two people way across town, meaning it wasn't Aaron. He figures Ben had lied to them and is indeed a werewolf. They plan to have the police catch Ben the next night and shoot him down. Because Ben saved his life back on the ship, Aaron figures Ben is a victim like he is and wants to save him.

Aaron has been locked in a cage to prevent him from harming anyone that night, but Ashlee helps him escape. Aaron bumps into the other werewolf, and he remembers a legend that says saying the werewolf's real name will turn him back into a human. He tries but it only comes out as growls. He puts the pendant on Ben so Dad will stop the police from shooting him, which works when the police storm by.

He takes Ben home and locks him up. Aaron comes in and tries to get Dad to know he's not dangerous. This works but now he wants to send them to top scientists to figure out a cure. Aaron doesn't want to live out the rest of his life in a lab, so he bites his dad, turning him into a werewolf. The three werewolves run into the night, as Aaron says the woods might be crawling with wolves soon.

German (Der Werwolf ist Unter Uns - The Werewolf is Among Us) 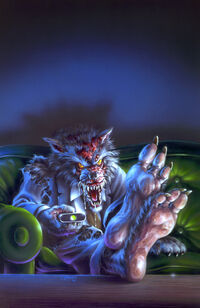