Goosebumps Wiki
Register
Don't have an account?
Sign In
in: More Tales to Give You Goosebumps, Werewolves, Summer,
and 5 more

"The Werewolf's First Night" is the first of ten short stories in More Tales to Give You Goosebumps.

Brian is twelve years old. Brian's parents have signed him up for day camp at Thunder Lake. There are rumors circulating that there are werewolves at this camp. The Thunder Lake camp is meant for teenagers, so Brian and another kid named Kevin are the youngest campers. Kevin is a nerdy red haired boy who is always picked on by the three fifteen year old bullies: Jake, Phil, and Don.

Brian is paranoid; he is certain that there are werewolves at this camp. One time, while Don is smiling, Brian thinks that he sees fangs. At night, Brian sees Phil running through the woods like a wild animal. Several nights later, Brian witnesses Jake howling at the moon. Brian runs off to warn Kevin that Jake, Phil, and Don are werewolves. However, when Brian finds Kevin, he sees Kevin eating a piece of raw hamburger meat.

Brian knows that there is a full moon coming, and he is terrified. He tries to get his parents to take him out of camp, but they won't. Brian is forced to spend a night in the woods with four potential werewolves during a full moon.

The night of the full moon finally arrives. Brian peeks out of his tent to see what the other campers are doing and sees them turning into werewolves. Brian's terror is soon stopped when the "werewolves" take off their masks. The costumes were all a part of a big initiation joke. The other kids are all laughing when Brian begins to feel something strange, thick hair quickly spreads all over his body, he grows fangs and claws and he transforms into a werewolf. Brian realizes that camp might be fun after all. He begins chasing the other campers. 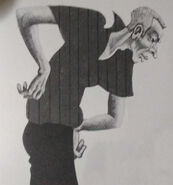 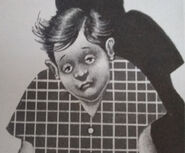 Brian as a human. 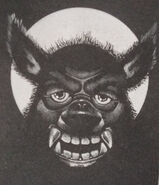 Brian pictures Don as a werewolf.

Phil runs in the woods at night.

Jack disguised as a werewolf.

The campers are turned into werewolves. 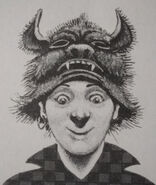 Phil was wearing a werewolf mask.

Brian turning into a werewolf.

Brian as a a werewolf hunting Jake, Phil and Don.

Brian and his family as werewolves hunting.