The Streets of Panic Park

The Streets of Panic Park

When the Ghost Dog Howls
The Streets of Panic Park is the twelfth book in the Goosebumps HorrorLand book series, and is the final book in the first arc of the HorrorLand series. It was first published in 2009.

The cover illustration depicts Slappy the Dummy riding on a flaming carousel.

Luke and Lizzie think they’ll be safe in Panic Park. But they’re wrong. Because Panic Park is home to The Menace, a two-faced villain with a twisted plan to trap them forever.

They learn they’ve been sharing secrets with a traitor, who’s been tricking them all along! To beat The Menace and his rotten crew, Luke and Lizzie must team up with an old foe. But will they be double-crossed again?

This book begins where the previous book leaves off. Lizzy, Luke, and the Very Special Guests are brought before a giant stage and The Menace tells the kids that someone tricked them into coming to Panic Park. All of the kids turn to Jillian and Jackson Gerard where Michael beats up Jackson for their betrayal much to Jillian's horror. The Menace reveals that Jillian and Jackson's psychic powers did not come from Madame Doom, but their powers came from him. After the Menace orders his horrors to send Jillian and Jackson to an unknown location, Billy Deep tries to escape the auditorium that all of the kids are being held in, but shadow people are blocking the exit. When Billy Deep leaps through the shadow people, he comes out looking as though he is in grayscale. When the kids beg The Menace to change Billy back, The Menace refuses.

Several shadows approach the kids and put bracelets around their wrists. The Menace says that the bracelets will collect the kids' fear. The Menace calls for the Fear Meter, and Byron brings it to him. The Menace reveals that Byron has worked for him all along. Byron says that he chose the bravest kids possible because only the bravest kids will be able to survive The Menace's tests. The Menace says that he will use the kids' fear to remove Panic Park from 1974; in 1974, the Fear Levels in Panic Park were so high that the entire park was shifted into another dimension. The Menace then reveals that he has two faces; one face is normal, but the other face is bright red and acts insane.

The Menace begins the Fear Meter. The Fear Meter says that the kids' fear level is only 20, and The Menace wants the number to go up to 100. The kids all fall through a trap door in the floor, and they land in a screening room. The Menace plays a recording of a roller coaster, and the chairs that the kids are sitting in tilt in sync with the tilting of the roller coaster in the film. After several more scares, Byron takes the kids from their chairs and moves them to the room where they will be staying.

Once Byron has left, the kids open the door to their room and find that it is unlocked, so the run out into the hall. The kids find an elevator and enter it. The lights in the elevator go out suddenly, and the elevator begins free falling. When the elevator lands, the kids cannot manage to open the elevator doors. Eventually, the doors slide open on their own. The kids run outside into Panic Park. Once outside, Carly Beth is surrounded by shadow people who demand hugs. The shadows envelope Carly Beth and cause her to turn into a shadow. Meanwhile, Robby remembers that Britney and Molly had visited him in HorrorLand, so he asks the girls how they escaped Panic Park. The girls cannot remember the exact method for escaping, but they remember entering a white building. The kids go to a nearby white building. The inside of the room looks like a waiting room. Unexpectedly, Dr. Maniac appears. Dr. Maniac checks the Fear Meter and sees that the meter reads 50. He then takes them to the Shake Shack which is an earthquake simulation ride and activates it causing the kids to bounce around. When the ride is over, all the kids (except for Billy and Carly Beth) suffer from dizziness and concussions, but Abby and Julie still continue shaking.

Dr. Maniac uses a giant paint brush and brushes it over Robby. Dr. Maniac uses the brush to erase Robby. Dr. Maniac leaves. Robby, now invisible, and the other kids continue searching for the building that Britney and Molly had used to escape. Sheena sees the Hall of Mirrors, and the kids deduce that they can use the mirrors to get back to HorrorLand. The kids are unable to pass through the mirrors and the doors to the building slam shut behind them. Many horrible things appear in the reflections of the mirrors surrounding the kids. Eventually, Slappy appears in one of the mirrors. Slappy zaps Britney, which causes Britney to turn into a ventriloquist's dummy. The Menace reappears, and he criticizes the kids for not being frightened enough. Michael stands up to The Menace, but the Menace decides to use Michael as an example. Suddenly, there is a bright flash. After the flash, the kids find that Michael now has a second face. The kids manage to run away from The Menace. The kids stumble across all of their enemies from earlier in the year!

The villains lead the kids to a building where The Menace is. The kids wander into the building and approach The Menace in his study. Byron jumps out and tries to stop the kids, but the kids push him out of the way. The kids all join hands and begin chanting together. The Menace jumps up and the Fear Meter reaches 97. The Menace moves over to his computer and begins typing. Worms begin crawling out of the kids' nostrils, mouths, and ears. The Fear Meter now reads 99. Lizzy gets an idea, she tells Luke a joke. They begin giggling and telling each other jokes. Eventually, all of the kids start laughing and the Fear Meter begins dropping. All of the other villains enter, and they begin laughing at The Menace as well. As everyone laughs, The Menace begins shrinking and melting.

Soon, everyone becomes aware that Panic Park is shrinking. The villains and the kids leave The Menace and run to the ride called The Whirlwind. The kids believe that the ride is dangerous, but the villains say that the ride will take them to HorrorLand. With no other options left, the kids get on the ride. Lizzy, being the last one to get on, sees that Panic Park has shrunk down to the size of a bubble. Lizzy watches as the park pops out of existence.

The kids arrive back in the HorrorLand parking lot; Britney is no longer a dummy, Carly Beth and Billy are no longer shadows, Robby is no longer invisible, Abby and Julie have stopped shaking, and Michael has only one face. The kids are reunited with their parents. The parents of the kids do not have any clue that their kids had been in serious danger. Lizzy observes a Horror watching them, and she asks if he is Ned. The Horror confirms Lizzy's assumption, and Lizzy thanks him.

Once she is back at home, Lizzy is unable to forget Panic Park. In her suitcase, Lizzy finds Slappy. Slappy smiles and asks if Lizzy is ready to start a new story, one that will really give her goosebumps. Slappy begins laughing maniacally. 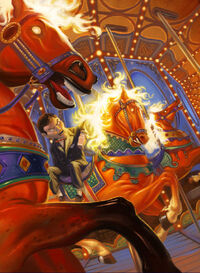