Black (in cursed form)
Yellow (in true form)
The Snowman is a living creature who appeared in the fifty-first Goosebumps book, Beware, The Snowman.

Several years ago, two sorcerers cast a spell on a snowman, bringing him to life. But then they lost control of him and he set out to destroy the village. The sorcerers tried to put him to sleep with their magic, but they weren't powerful enough. The villagers gathered together and somehow managed to force the Snowman up the mountain and into the ice cave. Afterwards, most people left Sherpia. Conrad built a cabin just beneath the ice cave and those who stayed in Sherpia, and started building snowmen in the Snowman's image to honor him and keep him from coming down the mountain.

One day, Jaclyn DeForest visited him to see if he was real. The Snowman told her that he was Jaclyn's father, and claimed that he was turned into a snowman by her mother. He says someone needs to finish the old poem to free him. She did so, but as soon as all the snow dripped away, Jaclyn realized that he lied, and that he is actually a monster. A crusty, red scaled monster with a bull-shaped head, yellow eyes, a purple tongue and jagged teeth.

Now set free, the monster heaved the poetry book over the side of the mountain, then proceeded to grab Aunt Greta and Jaclyn with plans to throw them down the mountain, too. Suddenly, he dropped the pair on the icy ledge as he saw an army of living snowmen from Sherpia coming up the mountain. As soon as the snowmen reached the top, they pushed the monster back against the wall of the ice cave and swarm over him until he had froze.

Soon after, Conrad arrived at the icy ledge, saying that he brought the snowmen to life, revealing himself as a sorcerer. Greta told Jaclyn that Conrad is her true father and the reason they've moved to Sherpia. Conrad was the sorcerer, and he and her mother were practicing powerful magic when it got out of control and created the monster that's now frozen inside the ice cave. In an attempt to stop the monster, they froze him inside the body of a snowman. After that, Jaclyn's mother moved out of Sherpia with Jaclyn to forget about what happened, while Conrad stayed because he felt like he owed it to the people of the village to protect them from the monster's wrath.

The Snowman is an evil being, and always has been. He is deceitful and only cares about himself and causing chaos.

In his original form, the Snowman is a red, scaled creature with a bull-shaped head. He has a purple tongue, three-fingered hands, jagged teeth, and yellow eyes. 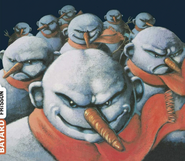 The snowmen as depicted on the French cover of Beware, the Snowman. 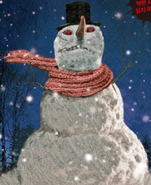 The snowman as depicted on the Korean cover of Beware, the Snowman.

The Snowmen as they appear in Goosebumps HorrorTown.
Community content is available under CC-BY-SA unless otherwise noted.