Brown (French cover only)
The Snatcher is an evil spirit from the nineteenth Goosebumps Series 2000 book, Return to Ghost Camp.

At Camp Full Moon, the legend of The Snatcher is commonly told by camp counsellors at campfire meetings. The legend says that The Snatcher haunts a forest adjacent to Camp Full Moon, and usually takes the form of a fox to "snatch" one camper each year. The camp legend tells the story of a camper named Tommy who attended Camp Full Moon on the year of its opening. Tommy would become the first camper to fall victim to The Snatcher.

When Dustin goes to Camp Full Moon, he doesn't believe the legend of The Snatcher at first. Whilst walking through the woods he meets a girl named Laura, who claims that she is attending the girls' camp which she hates, and persuades Dustin to run away from camp with her to a highway just on the other side of a river in the woods.

Soon, Dustin realises that everyone at Camp Full Moon is a ghost. He runs into the woods to escape and meets Laura there, who tells him that now is the time to retreat to the highway, and all they need to do is cross the river. But before they can begin to cross, one of the ghosts from camp appears and tells Dustin that everyone at camp was killed by The Snatcher, and they can only rest if someone crosses the river alive. He also claims that Laura is, in fact, The Snatcher in disguise, and only wants Dustin to cross the river so she can kill him.

Dustin attempts crossing the river, but the ghost tells him that the waters are infested by monsters. As Dustin begins walking across a tree branch, Laura transforms into a ravenous fox and jumps on to the branch. The branch cracks under The Snatcher's weight and monstrous hands drag it down into the river. Dustin manages to cross the river, freeing the ghosts, but is unsure how to cross to the other side again. 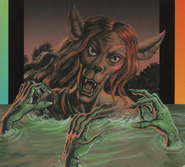 The Snatcher as depicted on the French cover of Return to Ghost Camp.
Community content is available under CC-BY-SA unless otherwise noted.
Advertisement