It's a field of screams!

The Scarecrow Walks at Midnight is the twentieth book in the original Goosebumps book series. It was first published in 1994.

The cover illustration features a scarecrow on a pole in the cornfield at night. There seems to be a red light coming from an unknown source while there is a full moon in the background.

Jodie loves visiting her grandparents' farm. Okay, so it's not the most exciting place in the world. Still, Grandpa tells great scary stories. And Grandma's chocolate chip pancakes are the best. But this summer the farm has really changed. The cornfields are sparse. Grandma and Grandpa seem worn out. And the single scarecrow has been replaced by twelve evil-looking ones. Then one night Jodie sees something really odd. The scarecrows seem to be moving. Twitching on their stakes. Coming alive...

Jodie and her brother, Mark, are sent to spend a month with with their grandparents on their farm. The farm is located in the countryside, near a small town. Grandpa Kurt and Grandma Miriam have sent one of their farmhands, Stanley, to pick up Jodie and Mark from the train station. Stanley is a middle aged man and nice, but he is also very strange. For instance, he carries around a book of superstitions that he follows devoutly. While being driven to her grandparent's farm, Jodie notices that her grandparents have replaced their old scarecrow with multiple new scarecrows. Stanley claims that he made the scarecrows, and he mutters that they walk at midnight. Jodie is greatly confused by this.

When Jodie arrives at her grandparents house, she begins noticing subtle things wrong with their behavior. Grandpa Kurt used to tell amazingly scary stories, and Grandma Miriam used to make amazing pancakes. However, when the kids try to get Grandpa Kurt to tell them a story, he ignores their request and goes to bed. The next morning, the sibling's wake up and discover that their grandmother has not made her signature pancakes.

Disappointed at her grandparent's behavior, Jodie goes to her room. During the night, she looks out of her windows at the scarecrows in the field below. Jodie sees the scarecrows writhing and moving on their stakes. She can't tell if they are being moved by the wind or if they're somehow moving on their own. She can't even ask her grandparents because their bedroom is door is closed.

The following day, Stanley, Jodie, and Mark go out fishing. Before Stanley even allows the children to begin, he demands that they walk around the barn three times, which his superstition book has instructed him to do for good luck. When the group gets to the creek, Jodie can't shake her fear of the scarecrows. She steps in a clump of weeds, and accidentally scares herself by assuming it is the hand of a scarecrow lying in the water. Behind a tree, Jodie can see a figure peering out at her. After a while, she becomes certain that the figure is a scarecrow. When Jodie tries to point out the scarecrow to Stanley, it is nowhere to be seen, and Stanley unexpectedly runs away.

Jodie isn't convinced that the scarecrows are coming to life. She thinks the more likely solution is that Stanley's son, nicknamed Sticks, is trying to play a prank on them. During the day, Jodie and Mark go horseback riding, and a scarecrow pops out of the field at them. This scares the horses, and Jodie is knocked to the ground. Both siblings are now fully convinced that Sticks has been planking them, so they plot a course of revenge. Mark dresses up as a scarecrow, and Jodie plans on drawing Sticks out into the fields alone. While Jodie is alone and looking for Sticks, a scarecrow approaches her. At first, Jodie thinks the being might be Sticks in disguise, but more scarecrows appear to be moving. The straw figures begin approaching Grandpa Kurt and Grandma Miriam's house. Jodie runs to the house's porch and is met by Sticks.

Stanley runs into the cornfield, chanting a spell from his book. Thinking that they need to stop the man, the kids run into the cornfield, but they can't stop Stanley. The scarecrows begin to approach the group, and Stanley doesn't seem to have control over them. Sticks reappears, and he is wielding two torches. He begins lighting scarecrows on fire until there are no more left moving. 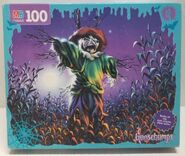 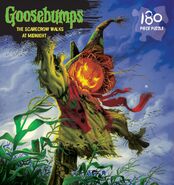 Puzzle based on the Classic Goosebumps reprint of the book 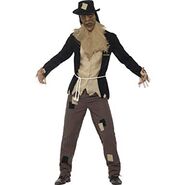 The Scarecrow Walks at Midnight was adapted into a Goosebumps Graphix story in September 2006 by Greg Ruth, as the second story in Creepy Creatures. 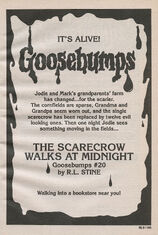 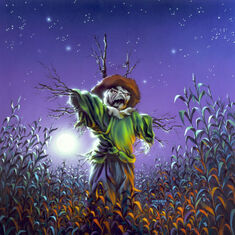 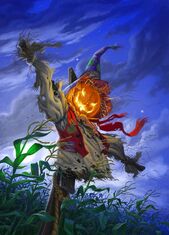 Retrieved from "https://goosebumps.fandom.com/wiki/The_Scarecrow_Walks_at_Midnight?oldid=124329"
Community content is available under CC-BY-SA unless otherwise noted.