Aliens (true form)
The Pumpkin Heads, also known as Shane and Shana, are the main antagonists in the forty-eighth book in the Goosebumps series, Attack of the Jack-O'-Lanterns, as well as its television adaptation.

The Pumpkin Heads are creatures who have jack-o'-lanterns for heads and breathe out fire. This was the disguise of a race of shapeshifting aliens.

Drew Brockman, Walker, Tabby, and Lee went out on Halloween night but encountered two people dressed in costumes with pumpkinheads. Tabby and Lee were convinced that the two are Shane and Shana. The two pumpkin-headed people took the kids to a street that the kids are sure was never there before, saying they will get lots and lots of candy from the incredibly generous inhabitants. But when it started to get late, Drew and the others learned that the two pumpkin headed kids would not let them go home, and want them to trick-or-treat forever. Tabby and Lee were still not scared, so they tied to take the jack-o'-lanterns off the two, but found that there is no head beneath them and that the jack-o’-lanterns are still speaking.

The two Pumpkin Heads then revealed that they are Shane and Shana and that the entire ordeal was merely the prank that the four had created to scare Tabby and Lee. It turned out that Shane and Shana are actually aliens with the strange abilities like shape-shifting and the other people in the neighborhood are their brothers and sisters who were in on the prank as well. As Shane and Shana prepared to depart, Drew offered them some candy, but the two tell her that their people eat human flesh. They stated that she needn't worry yet, she's not an adult, nor is she plump enough yet. Drew asked if they were joking, but they didn't answer.

The Pumpkin Heads appear in the television adaption of Attack of the Jack O'Lanterns.

In the 2015 Goosebumps movie, a Pumpkin Head is part of Slappy's army of monsters and villains. The Pumpkin Head is taller than those of the TV episode, being around the same height as the Scarecrows, wears a different outfit, and has a skull-like carving on his head.

A pumpkin-headed tree monster based off the Pumpkin Heads appears in the film Goosebumps 2: Haunted Halloween as a Halloween decoration brought to life by Slappy using the Tesla Tower. Various other jack-o'-lantern-themed monsters also appear in the film.

In the tie-in book Slappy's Return, a Goosebumps-themed Halloween costume of a Pumpkin Head is one of the costumes brought to life by Slappy. 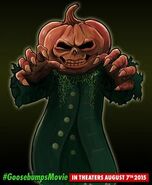 Concept art of the Pumpkin Head from Goosebumps. 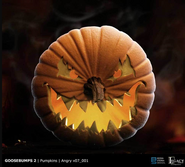 Concept art of the Fire-breathing Jack-O'-Lantern. 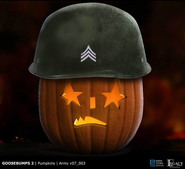 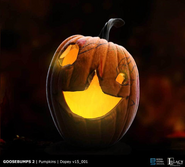 Concept art of Terry the Pumpkin. 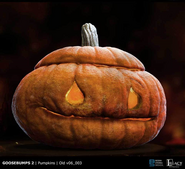 Concept art of an elderly Jack-O'-Lantern. 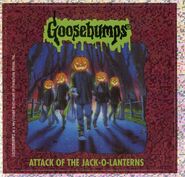 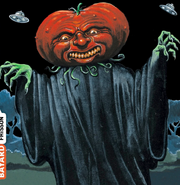 A Pumpkin Head as depicted on the French cover of Attack of the Jack-O'-Lanterns.

A Pumpkin Head as depicted on the Korean cover of Attack of the Jack-O'-Lanterns.

Two Pumpkin Heads as depicted on the Italian cover of Attack of the Jack-O'-Lanterns.

A Pumpkin Head walking with the Bog Monster, Murder the Clown, a Scarecrow, the Snake Lady, and some Graveyard Ghouls. 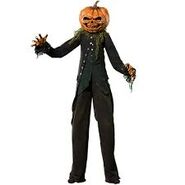 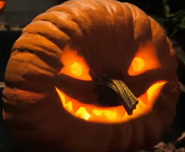 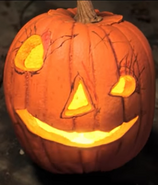 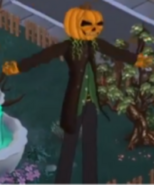 A Pumpkin Head as seen in Goosebumps HorrorTown.

The Pumpkin Heads attacking as seen in HorrorTown. 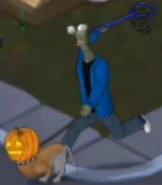