Stuart Stone
The Phantom, also known as Brian Colson, is the ghost of a child actor who appeared in the twenty-fourth Goosebumps book, Phantom of the Auditorium, as well as its television adaptation.

Seventy-two years ago in Woods Mill Middle School, in the year it was first built, the students wanted to put on a play, so a boy hunted around in the basement of the Old Woods Mill Library and found a script called The Phantom, which was a scary play about a girl who is kidnapped by a mysterious phantom. The boy showed it to his teacher, who decided it would be fun to perform the play and that it would be a grand production with the best scary special effects they could create. Soon rehearsals were underway and the boy who had found the script won the lead role of the phantom and he and his friends worked really hard to make it a good play. But on the night of the play, after parents and friends filled the auditorium and the kids were in costume, the teacher called them together to have a pep talk with them only to find that the boy playing the phantom had disappeared, much to their surprise. They searched everywhere for the boy but he was nowhere to be found. And just as the teacher was about to announce that the play could not go on, a horrible scream was heard. Believing it to be the boy, the teacher ran toward the sound, calling out to him only to hear silence. The entire school searched again, but the boy was nowhere to be found. And he was never seen again making it possible that he became a real phantom.

Seventy-two years later, a boy named Brian Colson moved into Woods Mill from Indiana. He thought he could try out the phantom, only to find that the roles have already been given out. So Ms. Walker, the current teacher offered him to join the scenery crew if he wished, to which Brian enthusiastically agreed to. Brian also became good friends with Brooke Rodgers and Zeke Matthews. While rehearsals were underway, many things started to go wrong. And Zeke, who was playing the phantom, has been blamed for these incidents and he was kicked out when he was thought to have ruined the scenery with red paint that was found in his locker when Ms. Walker caught him, Brian and Brooke sneaking in the school to find the phantom. And the play was almost cancelled when some pages in a script were glued together. Brian, Brooke and Zeke (who was grounded) tried looking for the Phantom again by going down the trapdoor that led into the secret tunnel and it was later revealed to be Emile, a poor homeless man who was trying to keep everyone from discovering his home, which he wanted to keep secret after he lost his apartment. Emile managed to get away before the police could find him, but it solved the mystery and the play was able to go on without any problems.

On the night of the play, Zeke was knocked out by a mysterious boy, who took his place onstage. It was later revealed to be the boy that was playing the Phantom who disappeared before the play could be performed. While the play was underway, he explained to Brooke (who was playing the phantom's sweetheart, Esmeralda) that he had been living under the theater for more than seventy years and he was chosen to star in a play and it was to be the greatest night of his life. But an hour before the play was to begin, he fell through the trapdoor to his death. And he became a real phantom and he had been waiting down there ever since, hoping for a night like this very night where he could finally play his greatest role. Brooke became anxious to know who the boy was so she tugged off his mask to find out. The Phantom was horrified at this and he staggered back and fell down the trapdoor and he died all over again. Brooke and Zeke later looked through an old yearbook of Woods Mill from the 1920's that was in Brooke's locker and saw in an article of the play that the boy who disappeared was Brian.

Brian was tall and thin with dark brown hair and bright green eyes. He was said to be kind of cute by Brooke and his face was often red from his blushing.

Brian was a pretty shy person who certainly didn't look like the acting type. But he did have a lot of enthusiasm and liked to help out on anything. He was often reluctant and uneasy about doing something he shouldn't be doing, such as when he and his friends were breaking into the school to find out why the play is being sabotaged. Brian was really bent on joining in the play, especially having the role of the Phantom so that he was finally able to finish his greatest role that he never got to finish seventy-two years ago. And he was really pained that he died on what was thought to be the greatest night of his life.

The Phantom as depicted on the UK cover of Phantom of the Auditorium. 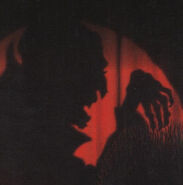 The Phantom's shadow as depicted on the French cover of Phantom of the Auditorium. 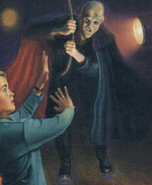 The Phantom as depicted on the Dutch cover of Phantom of the Auditorium.

The Phantom as depicted on the Korean cover of Phantom of the Auditorium.

The Phantom's cameo as a portrait in Goosebumps: The Game.
Community content is available under CC-BY-SA unless otherwise noted.
Advertisement