One small step for mummy...

The Werewolf in the Living Room
The Mummy Walks is the sixteenth book in the Goosebumps Series 2000 book series. It was published in 1999.

The cover illustration depicts Emperor Pukrah walking out of a cave, after what looks to be an explosion.

Michael Clarke is at the John F. Kennedy International Airport in Long Island, New York. He notes about his surroundings, while his parents repeatedly tell him to "be careful". Michael boards the airplane to Orlando to visit his aunt, when he notes that he is the only passenger. He decides that nobody else has boarded yet, but soon the airplane takes off, him remaining the only passenger. He looks at a note that his parents had given him, and it says WE ARE NOT YOUR PARENTS.

Confused as to what is going on, a Middle-Eastern man emerges from the cockpit and begins calling him "excellency". He serves him gourmet meals as day turns to night, and a confused Michael falls asleep while the airplane flies over the Atlantic Ocean. Michael awakes to find the airplane flying over a desert, and it soon lands on a small airport in the small Middle-Eastern nation of Jekeziah. A crowd of people outside cheer and clap, and Michael is led into a military Jeep that carries him off to the capital city, Ramenn. The man driving the jeep reveals the man from the airplane to be Lieutenant Henry, and himself to be General Rameer. Rameer drives to the beautiful royal palace, with gold trimmed walls and fountains and hedges.

Rameer gives him a bountiful lunch and tells him that the people who raised him for the last twelve years were not his parents. In fact, they were people who his actual parents recruited to raise him in the safety of America, after they were killed in the Jekeziah Civil War. Jekeziah has been torn with war for the past few years and the resistance has finally been defeated. However, there are some left. His parents also planted a chip in his brain, revealing the location of an ancient mummy named Emperor Pukrah, a previous Jekeziah leader.

Rameer explains the dire importance of finding Pukrah. Not only is Pukrah an important historical relic, as it is the world's oldest mummified body, but within its wrappings is the Jekeziah Sapphire, which is so valuable that the entire country's treasury is based on it. Rameer informs him that his parents have had the mummy hidden and told nobody, so the resistance would have no chance of finding it. They hope to find the mummy with the help of Micheal's brain chip.

Rameer tells him to rest for a day, but he says that he must tell them the location by tomorrow, as they need to get the jewel and the mummy as soon as possible. Michael does not know the location of the mummy and is convinced that he is not the prince. He tries to call home, but his telephone cannot call to his home, rendering it useless. Michael finds a girl by the name of Megan in his room, who reveals herself as Rameer's adopted daughter. She tells him that Rameer is not who he seems, that he is evil and doesn't think Micheal is fit to rule Jekeziahh, and he will torture him if necessary to get the location of the mummy.

However, the soldiers are superstitious of the mummy and believe that Pukrah is cursed. They also believe that anyone who steals the mummy and is not royalty, will cause it to come to life and walk the world until the evil people who stole him are all destroyed. So they want Michael to show them where it is to avoid the curse.

Michael wants to avoid torture, so he attempts to flee. But he is caught and led to a room filled with maps of the small nation with multicolored pushpins and marker on them. General Rameer only laughs at his escape attempt, believing it was a stunt to make himself more brave. Rameer asks where Pukrah is, and Michael decides to tell the truth. He says that he cannot remember, and Rameer says that they will just perform surgery on his brain to extract the chip, potentially killing him. Michael is horrified at the thought and pretends for his memory to suddenly come back so he can send them on a wild goose chase to buy more time. He points to a random cave where they go the next day.

They encounter rebel soldiers, and a temporary gunfight is initiated, where Michael seizes the opportunity to escape. However, the gunfight is won before he can flee, and they go deeper into the cave. They find a wall of stones and excavate, finding the mummy. Pukrah comes to life and the soldiers flee. The mummy grabs him by his throat, but it is revealed to only be Megan, who made a costume to help buy Michael more time. Michael attempts to flee, but he is captured by rebel soldiers who attempt to extract the chip via x-ray.

However, there is no chip. Michael decides that he is the wrong child and is relieved as he no longer has any obligations to fulfill. But the soldiers are infuriated and attempt to feed him to pythons. However, Megan, who escaped with him, tells the soldiers that by sending them both away, it will make General Rameer sick with worry as to her whereabouts, and will use the military to find her, allowing the rebels to take over the government in the denouement.

They are sent back to America, where Michael goes back to his "parents" and Megan lives with them. His "parents" tell Michael that he was the right child after all and that they decided to remove the chip, as they it would ruin his life. They then reveal to Megan and Michael that they had the mummy smuggled over to America instead, jewel and all. Pukrah is in their basement.

The next morning, Megan is gone. She left a note that reveals she was a double-agent for her father. The Clarkes go to the basement and find that the mummy and jewels are also gone. In their place is a single note that reads, "THE MUMMY WALKS AGAIN."

Italian (La Mummia E Tornata - The Mummy Is Back) 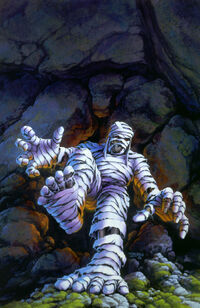