The cover illustration depicts Jonathan Chiller in his shop, and behind him are children being attacked by monsters. Slappy is next to Chiller.

"So Glad to See You All Back in My Shop."

Jonathan Chiller has had a plan all along. Nothing is free in HorrorLand, especially his rare souvenirs. Now it's time for the six kids who visited his shop to pay up. And Chiller knows exactly what he wants -- players for his deadly game.

Andy, Sam, Jessica, Meg, Marco and Ray are trapped by Chiller's evil plot. Who is this madman? He's made sure that there is only one way to escape from HorrorLand. But are they willing to pay for it... with their lives?

A young boy is kept at home by his parents. His mother thinks he has a special brain that needs to be nurtured, so she wants him to study all the time. His father thinks this is turning his son into a freak. His father's comments usually enraged the poor child. He is forced by his father to go out hunting to transform himself into a "man." The hunting trip goes wrong, as the boy accidentally shoots himself in the foot with his crossbow. His father merely laughs at him.

He takes his son home, where he tells mother that he gives up and he'll let Jonny stay inside from now on. Furious, the boy declares that one day, he'll prove to his father can be a man. He tells his figurines that he is Jonathan Chiller, and they shall all obey him. This sparked Chiller's hostile attitude.

Ray Gordon and some other kids who got souvenirs from the Chiller House are transported to Chiller. He asks them to play a game where they have to find the little horrors (that transported them to his shop) so they can go back home. He says Hunters are going to start hunting them the next day. He gives them Helper Cards so they can find their Helpers to help them find the horrors. They soon find out they can't leave the park without throwing away their Helper Cards. They soon get back their Helper Cards at a cart selling sushi-flavored ice cream.

They escape and split into groups: Ray and Sam, Andy and Meg, Marco and Jessica. Sam and Ray soon find Ray's helper,  who leads them to a red herring. After meeting Chef Belcher, they find Marco and Jessica and find out that the arrows are real. They run into Andy and Meg afterwards. When they find Madame Doom, Andy enters her tent and gets hit by an arrow, but he reveals that he's still alive, and that the arrow was fake, and Madame Doom wanted to make the game more "frightening." Andy says he didn't want to scare his friends, but Doom made him do it.

Madame Doom reveals that the Helpers were actually Hunters. They flee and soon find out that Chiller was playing the role of all the Hunters using his disguises. He tells them the game isn't over yet, but they are sick of all this. Chiller also tells them that he never had any friends as a kid, so he made his own, and his entire plan was to prove that he is a great hunter, just like his father. The children then put on his "friends'" costumes and state that they're leaving him. Chiller yells at them to stop messing with his friends. He tells the kids that they can leave using the toy horrors. They do so, and all of them return home safely.

Chiller spends the night cleaning up the mess the children made. When the shop opens, two customers come in. He greets them and says "Why don't you take a little horror home with you?" 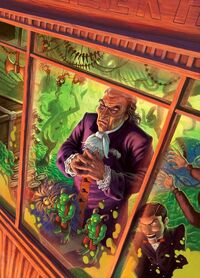