The Horror at Camp Jellyjam is the thirty-third book in the original Goosebumps book series. It was first published in July of 1995.

The illustration on the cover shows a Camp Jellyjam counselor with a strange, wide grin on his face.

It's Not Whether You Win or Lose — It's How You Stay Alive!

The next day, Rose and Jeff are both gone. Wendy begins planning an escape for her and Elliot. Sadly, Wendy can't convince Elliot to leave. Elliot wants to compete in a race the following morning to win his sixth King Coin. That night, Wendy sneaks out. She follows several counselors. They lead her into a theater in a clearing. Wendy decides to investigate the building. She witnesses Counselor Buddy hypnotizing all of the counselors. Wendy sneezes, which draws attention to her presence. Wendy finds a passage to a cave. She enters and sees dozens of kids working hard, including Alicia and Jeff. All of the Winners' Walk champions are moving furiously with mops and hoses around an enormous, purple, gelatinous creature wearing a gold crown. The children are trying to clean him. Wendy finds Dierdre, and Dierdre explains that the monster is King Jellyjam. She says that the camp counselors are hypnotized and pushing the kids in sports because "Only The Best" are chosen to be King Jellyjam's slaves. The creature can't stand his own stench so he needs the most athletic beings to keep him clean. Anyone who stops cleaning King Jellyjam, or refuses to clean him, gets eaten. Wendy sneaks out.

The next day, Wendy stops Elliot from winning his race to show him what she's seen. Wendy brings Elliot to the theater to show him King Jellyjam. Once beneath the ground again, Wendy reveals to Elliot that she has a plan to defeat King Jellyjam. She orders all the children to lie on the ground and stay still. King Jellyjam wails and attempts to grab the slaves, but he can't. Because she is standing, Wendy is grabbed by King Jellyjam, but, without the kids there to wash him, King Jellyjam melts into a pile of his own rancid, purple goo. Wendy, Elliot, and the freed child slaves rush out of the theater, but are stopped by the band of brainwashed counselors. Just as they are about to attack, the police arrive to investigate the source of the campground's stench, which had been plaguing a nearby town. The officer's whistles seemingly snap the counselors out of their trances. Wendy and Elliot are soon reunited with their parents and they go home.

Roughly two weeks after leaving camp, Wendy and Elliot are at their house when they hear a knock at the door. They find that Buddy has traveled to their house to deliver Elliot's sixth King Coin. After receiving the coin, the kids smell a disgusting odor. Their fear quickly disappears when their mother informs them that the scent is coming from the kitchen, where she is cooking Brussel sprouts. 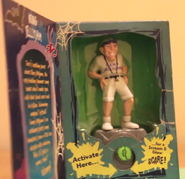 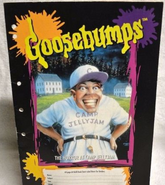 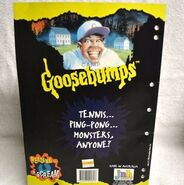 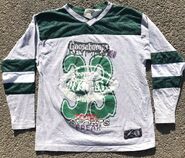 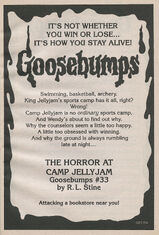 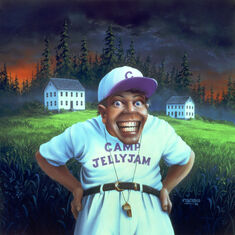 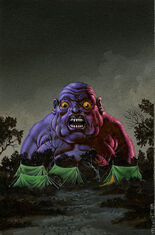 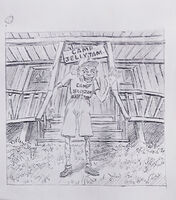 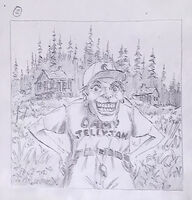 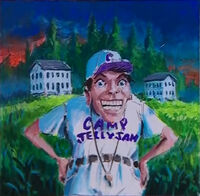 Retrieved from "https://goosebumps.fandom.com/wiki/The_Horror_at_Camp_Jellyjam?oldid=124330"
Community content is available under CC-BY-SA unless otherwise noted.