Varies by merchandise
The Horror, also known as The Old Horror, is a HorrorLand Horror featured in Goosebumps merchandise.

The star attraction of "HORRORLAND" amusement park isn't just any special effect; this monster is for real! The HORRORLAND Horror lives for thrills, the kind of breathtakingly frightful stunts that make humans of all ages scream with terror and leave the Horror laughing with delight! You see, this green and purple creepy creature takes its amusement very seriously!

The Horror has long twisted gray horns, big and bulging yellow eyes (although they are colored differently throughout the franchise's merchandise), green skin, metal toenails bursting through his footwear, four-clawed hands, and a red heart tattoo with the number 16 on his left arm.

The Horror is dressed like a greaser with a big white t-shirt, torn half-length blue denim pants, and brown leather ankle-length boots. In different merchandise, he is also shown wearing bunny slippers (brown or white) and roller blades (purple, gray, or blue) with elbow pads (white or gray). 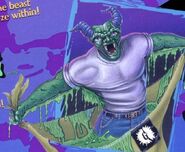 Transformation into the Horror.

The Horror beckons you into HorrorLand. 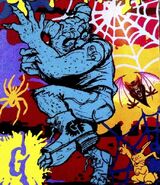 What is the Horror scared of?

But they make great slippers. 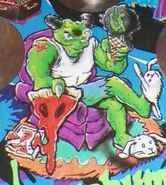 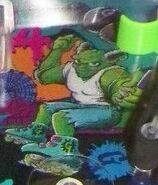 Back shot of the Horror (along with his jeans and boots). 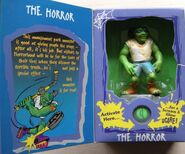 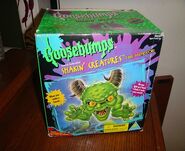 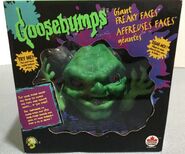 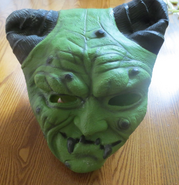 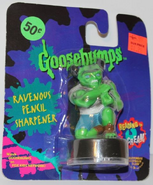 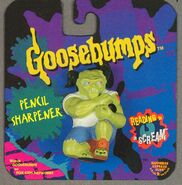 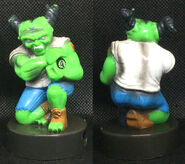 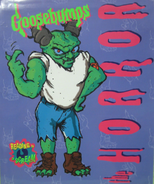 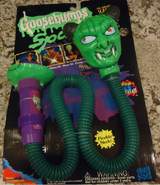 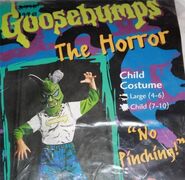 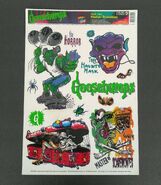 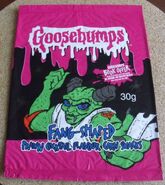 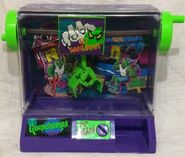 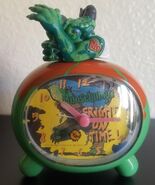 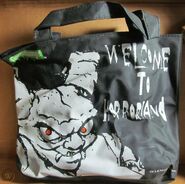 Sweatshirt (front and back). 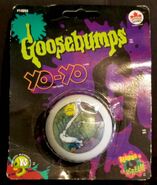 Yo-yo (unpackaged).
Add a photo to this gallery

Retrieved from "https://goosebumps.fandom.com/wiki/The_Horror_(merchandise)?oldid=142331"
Community content is available under CC-BY-SA unless otherwise noted.