"The Headless Ghost" is the fifth episode of season two of the Goosebumps TV series, and the twenty-third episode overall. It premiered on September 21, 1996 on Fox during the Fox Kids block.

Duane and Stephanie love exploring Hill House, the most popular tourist attraction in town. It's dark and scary and haunted, they say, by the 100-year-old ghost of a 13-year-old boy. A boy who lost his head! Duane and Stephanie must help him find his head —or else he's going to have to borrow one of theirs! 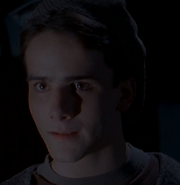 Andrew Craw
Add a photo to this gallery

Otto disguised as a tour guide.

Otto is now disguised as a realtor after helping a couple who bought the place. He is smiling evilly

Otto is actually the ghost of the sea captain, oh no!

And Seth is really the ghost of the spoiled boy who loved ice cream, double whammy!

The ghostly trio is ready to punish Stephanie by making her a ghost as well!
Add a photo to this gallery
Retrieved from "https://goosebumps.fandom.com/wiki/The_Headless_Ghost/TV_episode?oldid=135062"
Community content is available under CC-BY-SA unless otherwise noted.