The Abominable Snowman of Pasadena
The Headless Ghost is the thirty-seventh book in the original Goosebumps book series. It was first published in 1995.

The original 1995 cover illustration shows a headless ghost walking down the stairs, while carrying his severed head.

The 2018 Classic Goosebumps reprint in 2018 involves him sliding down a stair railing.

THEY'VE GOT A REAL HEAD START...

Everyone knows about Hill House. It's the biggest tourist attraction in town. That's because it's haunted. Haunted by the ghost of a thirteen-year-old boy. A boy with no head! Duane and Stephanie love Hill House. It's dark. And creepy. And totally scary. Still, they've never actually seen the ghost. Until the night they decide to go on a search. A search for his head...

Duane Comack and his friend, Stephanie Alpert, live in the relatively uninteresting town of Wheeler Falls. Although, they liven it by terrorizing the neighborhood. The two kids love pulling pranks — like looking into windows while wearing masks and making scary noises in the bushes. The only other thing scary about Wheeler Falls is Hill House, a building rumored to be haunted. Being that Hill House is the only real tourist attraction in Wheeler Falls, regular tours are held there, which Duane and Stephanie attend often. Their favorite guide is an elderly man named Otto. During a tour, Otto recounts the story of how Hill House became haunted.

According to legend, the house was built by a sea captain for his wife, Annabel. When it was finally finished, the captain was called to sea, and his wife was forced to spend her time alone in the house, waiting for her husband to return. However, the captain never came back, so the wife fled the house. As time passed, town residents began reporting ghost sightings of a man holding a lantern and calling for his wife. Regardless of its past, the Craw Family moved into the house. Their son, Andrew, was a nasty child; he pulled pranks on others and generally caused trouble. One night, Andrew discovered a room in the house. Inside, waiting for him, was the ghost of the sea captain. The ghost told Andrew that — since they'd seen each other — Andrew could not leave. The ghostly captain grabbed onto Andrew and pulled his head off, reportedly hiding it somewhere in the house later. After this ordeal, the captain vanished, leaving Andrew as the new ghost of Hill House — forever searching for his lost head.

The two go back for another tour, and Otto reveals more about the spirits of Hill House. The man tells the guests that — after Andrew's death — his little sister, Hannah, was driven mad. She stayed in her room and collecting dolls endlessly. Andrew's mother died by falling down the stairs, and his father seemingly burned in the house's fireplace. While on the tour, Duane notices a boy looking at him oddly. Stephanie tells him to ignore the unknown boy. The two friends break off from the group to search for Andrew's head. The kids go upstairs, where the tour never goes. They hear voices and want to investigate, but Otto catches them and sends them out of the house.

After leaving, the two are confronted by the boy from the tour. He says his name is Seth and that he can help them see a real ghost in the house. According to Seth, the ghosts never reveal themselves on the tour. They only come out at night. The three kids enter the house through the back, and they begin searching the building. Seth tells them another ghost story; this one is about a boy who was killed in the house's dumbwaiter. Eventually, Duane and Stephanie step inside of a pantry, and Seth locks them in. Seth claims that he is Andrew, the ghost.

Andrew explains that the head he's using is borrowed, and he has to return it. Andrew now wants Duane's head. Andrew attempts to attack Duane, but the group accidentally stumbles across a hidden tunnel behind the house's walls. Inside, there is a ladder leading to another secret room below. In that room, the trio finds Andrew Craw's missing head. Suddenly, the real spirit of Andrew appears, startling the boy who had claimed to be him. The real ghost grabs ahold of his head. The apparition thanks the group before vanishing inside the walls, now free to go into the afterlife.

Otto finds the trio, and he scolds them for sneaking into the house. Seth is revealed to be Otto's nephew, and he's scolded for telling ghost stories. Duane and Stephanie swear they saw a real ghost, but Otto doesn't believe them.

After several weeks pass, Duane and Stephanie have given up on scaring the neighborhood. However, during the winter, the friends decide to take one final tour of Hill House. Otto, and another guide, Edna are pleased to see them again. The kids are given a tour, and they leave. As they exit they house, Duane and Stephanie are stopped by a police car. The officer in the patrol car questions the kids why they were in Hill House. The friends explain that they were taking a tour. The officers believe this to be impossible — because Hill House went out of business three months ago. The officers laugh, saying that the kids received tours from ghosts. Duane and Stephanie glance back at the Hill House. Peering down at them from a window are the ghostly forms of Otto and Edna. 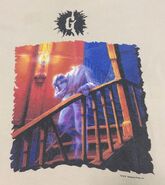 The Headless Ghost was adapted into an episode of the Goosebumps TV series. It is the fifth episode of season two, and the twenty-fourth episode overall. 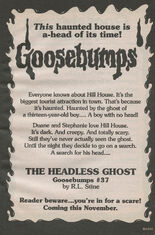 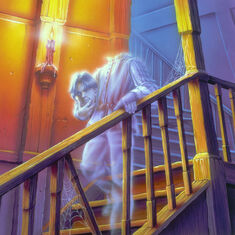 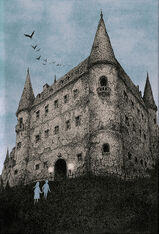 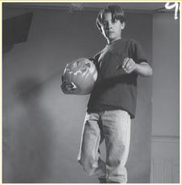 Photo shoot of the boy model posing as Andrew Craw for the concept art of the 1995 cover illustration.