Goosebumps Wiki
Register
Don't have an account?
Sign In
in: Books, Goosebumps Most Wanted: Special Edition, Ghosts (topic),
and 8 more

Trick or Trap
The Haunter is the fourth and final book in the Goosebumps Most Wanted: Special Edition sub-series. It was published in 2016.

The cover illustration is a black and white shot of the Marple House. The Haunter is emerging from the house, and he has glowing orange eyes and finger nails.

Sammy Baker is a quiet kid who wishes he wasn't so shy and timid. He is easily frightened but eager to prove he can be brave. On Halloween night, he follows his friends to the Marple House, an abandoned mansion on the other side of town.

Just past midnight, he feels a cold tingle at the back of his neck. The chill spreads across his body. It's unlike anything he's ever felt before. Soon, his whole head feels like a block of ice. He's about to scream, but the frigid sensation vanishes. Sammy doesn't realize he has just met The Haunter... and that his nightmares are only just beginning.

This book is broken up into 6 sections.

The book begins with a message from R. L. Stine. He welcomes the reader to his office and starts to talk about the wanted posters on the walls. One poster features a creature that Mr. Stine addresses as "The Haunter". He explains that a boy named Sammy Baker was at one point terrorized by this spirit.

Sammy is currently in the middle of a school assembly, and the mayor is giving a boring speech. Sammy reveals that he is about to do something crazy in front of the whole school. Sammy then proceeds to walk onstage and begins dancing wildly onstage. Sammy doesn't have a choice; he had to dance!

Three weeks earlier, Sammy is in Miss Flake's sixth grade. Miss Flake assigns her students a Halloween themed research projects. There are four project topics, so the class is going to be divided into four groups. Sammy is placed in the group that was assigned the topic "Are Haunted Houses Real?" The other members of his group are Bill "Buzzy" Buzzner (Sammy's best friend), Rubin Rubino (Sammy's archenemy), Summer Magee (the girl that Sammy has a crush on), Shamequa Shannon, Todd Garcia, and Misty Rogers. Sammy isn't happy that his group has to research haunted houses. Sammy is easily frightened and hates being scared.

The next day, Sammy is walking to Rubin's house for a group meeting. He passes the abandoned "Marple House," a house that is rumored to be haunted by the ghost of a boy who was struck by lightning. Sammy thinks that he sees a face in one of the windows. Frightened, Sammy runs to Rubin's house. During this meeting the kids agree that they should spend Halloween night in the Marple House. Shamequa says that her dad has ghost hunting equipment that they can use. Everyone in his group assumes that Sammy will be too scared to go, but Sammy assures them that he will go. Later that night, Sammy has a nightmare about the ghost in the house.

On Halloween night, Sammy and Buzzy go to Marple House together. When they get there, they see a light glowing in the upstairs window. Sammy pulls out his camera to record the event. When he finishes filming, an unidentifiable force hits him, causing him to drop and break his camera. Eventually, Rubin, Shamequa, Summer, and Todd arrive, so they decide to enter the house. The kids all crawl through a window. They soon begin setting up their ghost detecting equipment and recording equipment.

They are startled when Misty arrives to the house late. The kids get bored and want to go home, but Sammy hears a voice. The group decides to check the recorder. On it, they hear a creepy voice telling them that they won't be able to leave the house alive. Later, when they try to replay the message, they can no longer hear the voice. The group then hears a scream inside the room, so they decide to leave. However, Sammy begins to feel incredibly cold and is unable to move for a minute. When Sammy regains his ability to move, the group decides to leave despite not having any evidence.

A few days later, Sammy is in class. While Mrs. Flake is talking, Sammy suddenly hears a voice in his head tell him to do jumping jacks on the table. Sammy doesn't want to do this, but for some reason, he is unable to resist the urge to start jumping on the table. Over the next two days, the voice tells Sammy to do many more crazy things, such as interrupting the mayor's speech. Each time Sammy does what the voice says, he gets in more trouble. Eventually, the voice tells Sammy to do a cartwheel into the spaghetti pan in the cafeteria. This causes him to be sent home. On his way home, the voice tells him to climb a tree. Sammy gets stuck in the tree, and a neighbor has to call 911. The voice tells Sammy that it wants to kill him so they can have more fun together.

Sammy is incredibly scared by this message. The voice reveals that he died in Marple House and that he is lonely. Sammy goes home and tells his parents about the voice, but they don't have time to listen because they are going to a banquet. The next day when Sammy goes back to school, the voice tells him to dance on the roof of the school. He does this, but he falls. He would have died had he not landed on the principal. Sammy is once again kicked out of school. He then decides to go to Marple House in order to get the ghost out of his mind.

When he gets there, the voice refuses to leave. While inside the house, Sammy sees an ominous door swing open. The voice says it is a door between life and death, and he forces Sammy through it. When Sammy goes through the door, he is submerged in darkness. When he emerges from the darkness, he is a ghost. He is now able to see the ghost boy. The young looking ghost boy says that he is Benjamin Marple. The two of them go back to Sammy's school and spend the rest of the day forcing Rubin to do crazy things.

After one day, Sammy decides that he no longer wants to be a ghost, so he heads back to the Marple House. Sammy thinks that going back through the door might bring him back to life, but Benjamin doesn't want that to happen. Benjamin grabs Sammy, but Sammy manages to pull both of them through the door. Sammy is in darkness once more, but manages to escape. Sammy is alive once more. Sammy's parents talk to the principal of Sammy's school and convince him to allow Sammy back, so Sammy returns the next day.

In the middle of class, Mrs. Flake introduces a new student named Benjamin Marple. When Sammy pulled Benjamin through the door, he helped Benjamin regain his life. Benjamin was unable to do this before because he was dead for too long. Later in the day, while Benjamin and Sammy are talking, Benjamin says that they should both go on the roof and start dancing again. Sammy is once again unable to resist the urge to obey. Benjamin says that it is because their minds were linked when they passed through the door. Sammy starts his dance, and looks down to see Summer smiling at him. 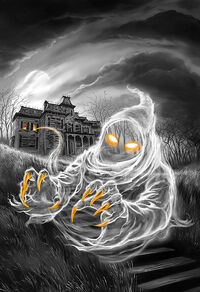