"Haunted Mask II" is the eleventh and twelfth episode of season two of the Goosebumps TV series, and the thirtieth and thirty-first episode overall. Part one and part two premiered on October 29, 1996 on Fox as a one hour special.

After last year's terrifying Halloween, Carly Beth buried her old haunted mask. Now this year her friend Steve wants to find a mask just as scary, but Carly Beth refuses to tell him where she bought hers. At the last minute though, Steve encounters a stranger wearing Carly Beth's old mask, a mysterious man who leads him to a boarded-up novelty shop. Steve slips in through the back door and steals a creepy mask he finds in the basement. What he doesn't realize is that Carly Beth's old mask is alive...and using both Steve and the shopkeeper to get her back!

The night before Halloween, Carly Beth and Sabrina are walking home from an early Halloween party. As they walk, they hear rustling in some nearby bushes. Carly Beth jumps and screams at the bushes, scaring Chuck and Steve. The two boys are annoyed that Carly Beth is no longer able to be scared by their pranks. Chuck and Steve then ask Carly Beth about the mask she wore last Halloween. When she refuses to tell them where she got it, they take the sculpted head of Carly Beth that she used as part of her costume and toss it back and forth. Sabrina finally ends the taunting by catching the head, and the two girls walk away. As they do, Sabrina asks what Carly Beth did with the mask. She reveals that she buried it in the local cemetery.

On Halloween afternoon, Chuck and Steve meet up outside of their school. Steve laments the fact that they're getting older and won't be able to enjoy Halloween for much longer. As they talk, the Haunted Mask rushes past them. Recognizing it as the mask that Carly Beth wore last Halloween, they follow after him. The Haunted Mask leads them to the abandoned novelty shop. Steve is intrigued by the shop, but Chuck is afraid and wants to leave. After finding an unlocked back door, Chuck and Steve enter the shop, but Chuck decides to leave. Steve enters the basement of the shop as the Haunted Mask lurks in the shadows. After briefly looking through boxes, he finds the old man mask that was left behind. Steve takes the mask and runs home.

Once Steve gets home, he rushes into his room and tries on the mask. The mask shrinks against his face for a perfect fit, astonishing Steve. Suddenly, Steve's mom knocks on his door. Steve quickly hides the mask as his mom enters his room. She shows Steve a pirate costume that she made for him. Steve fakes interest in it, but as soon as she leaves, he tosses the costume aside and examines the old man mask again. He tosses the mask onto his bed to go talk to his mom. As he leaves, the old man mask comes to life, stretching and squirming as spiders crawl over it.

Later that night, Carly Beth gets ready to leave to go trick or treating, wearing the duck costume her mother made for her last year. The Haunted Mask appears in a window, spying on her. He sees the sculpted head sitting on the mantle, laughs, and disappears. Carly Beth's brother Noah asks her if he can borrow the Haunted Mask for his costume, confusing Carly Beth's mother, who thought she had gotten rid of it. Carly Beth reassures her that she did, and tells Noah that he's lucky he only put it on once. Carly Beth then leaves to go meet Sabrina. Sabrina tells her that she's glad that they can have fun this Halloween after last year's experience with the Haunted Mask. Chuck then meets up with them and tells them he's going to find Steve soon. He mentions that Steve found the novelty shop, but that it was out of business. Shocked, Carly Beth asks if Steve went inside, but Chuck lies and says that he didn't.

Meanwhile, Steve gets ready to leave his house and hides the old man mask in a bag underneath his pirate costume. Steve lies and tells his mom that he's going to change into his costume at Chuck's house. Sparky, the family dog, barks angrily at Steve's bag. As trick-or-treaters arrive, Steve leaves and hides behind a tree before pulling his mask out of the bag and putting it on.

As Chuck is wandering down a street looking for Steve, he hears the voice of an old man beckoning from behind a bush. Chuck cautiously approaches before Steve leaps from behind the bush wearing the old man mask. Chuck recognizes Steve's clothes, but Steve (as the old man) tells them that he stole them, scaring Chuck. Chuck begins to run away, but Steve calls out to him in his normal voice and pulls off the mask. Chuck then returns as Steve admires the mask. After Chuck repeatedly asks to see the mask, Steve becomes annoyed with him and puts the mask on again. The mask quickly melds to his skin and becomes his face. Steve roars at Chuck, his voice now sounding old and raspy. Chuck touches the cheek of the mask and is stunned to discover that it feels like real skin. He asks Steve how he is doing the old man voice, but Steve replies that it's his own voice. Steve then becomes distracted by a girl holding a large bag of candy. He runs up to her and steals her bag. Horrified, Chuck watches as Steve begins running around and scaring trick-or-treaters, but after a minute, Steve suddenly begins coughing and feeling weak. He decides he needs to eat the candy in the bag that he stole for energy and dumps it on the street. As Steve eats candy in a disgusting manner, Chuck tells him that he doesn't want to be around him. Steve becomes angry and begins mocking and degrading Chuck before telling him to leave. Steve then walks away and begins scaring more trick-or-treaters.

Carly Beth and Sabrina are enjoying trick-or-treating when Chuck runs up to them and tells them about Steve and the old man mask. Carly Beth realizes he's in trouble and the three begin searching for him. Meanwhile, Steve starts becoming weaker and weaker. He begins to have trouble breathing and falls into a group of trees. Using a branch as a cane, he tells two girls walking by that he's thirsty and needs water, but the girls are horrified by his appearance and run away. Steve then walks to a nearby house and knocks on the door. As he looks at his reflection in a window, he sees spiders crawling on his face and in the stringy hair of the mask. He brushes the spiders off, and as he looks at his reflection again, the old man mask begins to stretch and morph on his face. He tries to pull the mask off, but it remains stuck to his face. Steve then calls on two trick-or-treaters to try and find the bottom of his mask, but they are unable to find it. He tells them that he's only wearing a mask, but the trick-or-treaters tell him that the mask is his face and run away.

Carly Beth, Sabrina, and Chuck continue searching for Steve but are unable to find him. The three then head to the abandoned novelty shop after Carly Beth remembers going there last Halloween. Inside the store, the Haunted Mask watches from behind the boarded-up windows. The three enter the basement, but Steve is nowhere to be found. Chuck and Sabrina suggest going to Steve's house, hoping that he was able to remove the mask on his own.

Steve tries getting help from a woman and her young daughter, but she chastises him for scaring the little girl. Becoming weaker, Steve collapses into a yard. The mask begins stretching and morphing again, and Steve looks on in horror as his hands become old and wrinkled. He realizes that the mask is turning him into an old man and decides to go home, but is confronted by the Haunted Mask. The Haunted Mask then demands that Steve retrieve the sculpted head of Carly Beth in order to destroy it. He tells Steve that the old man mask will never come off and that Steve will remain an old man forever unless he completes his task before midnight.

Carly Beth and Sabrina talk to Steve's mom while Chuck hides nearby. Steve's mom says that he's not home yet, but that he should be home by midnight. After she leaves, Chuck suggests calling the police, but Carly Beth tells him that the police won't be able to help Steve. They then continue searching for Steve.

Back at Steve's house, Carly Beth, Sabrina, and Chuck sort through their trick-or-treat candy while Steve sits quietly near the fireplace. Steve's mom comes in and talks to him. She mentions that Halloween isn't such a big deal to them anymore, and Steve says that he's getting too old for it. After Steve's mom leaves the room, Carly Beth looks at the fireplace and suggests that she and Steve should burn their masks. They throw the masks into the fire and watch as the masks melt down. Steve's mom calls them into the other room for hot cocoa and they leave. As they do, the Haunted Mask begins to reform in the fireplace. Sparky begins barking at it and drags it outside before burying it in the backyard. 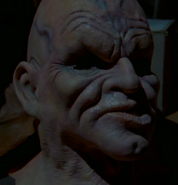 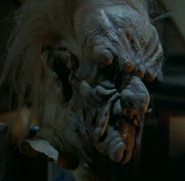 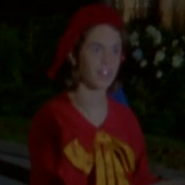 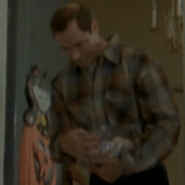 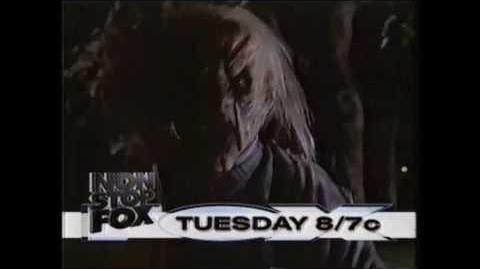 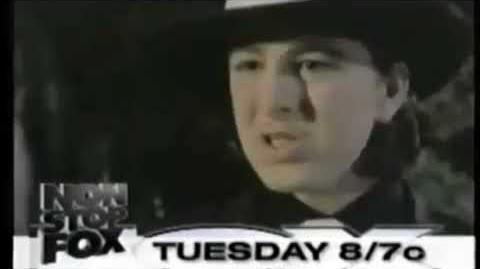 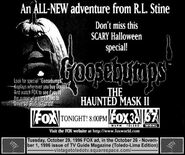