The story takes place a year after the events of The Haunted Mask. The main protagonist of the story is the obnoxious prankster Steve Boswell. Steve and his friend Chuck Greene harassed Carly Beth Caldwell relentlessly in the initial installment.

Both the original 1995 and 2018 Classic Goosebumps cover illustrations show Steve Boswell in an old man mask on the steps of a house. Tim Jacobus's signature can be seen on the porch floor in front of Steve's foot on the original artwork.

Steve Boswell will never forget Carly Beth's Halloween mask. It was so gross. So terrifying. But this year Steve wants to have the scariest costume on the block. So he gets a mask from the same store where Carly Beth got hers. It looks like a creepy old man. With stringy hair. A wrinkled face. And spiders crawling out of the ears! Steve's definitely got the scariest mask around. Too bad he's starting to feel so old. And so tired. And so evil...

As punishment for setting a squirrel loose in the girl's locker room, Steve Boswell is given a choice to coach a first-grade soccer team — The Walnut Avenue Hogs — every day after school or inflate basketballs by mouth with Steve choosing the former. Steve hates the first graders, going as far as calling them animals. The Hogs are chaotic, and constantly torment him with cruel pranks and insults. Steve decides he needs to get some payback, and his best friend, Chuck Green agrees. Chuck decides the best way to get them back is to scare them, as Halloween is just around the corner. Steve is initially reluctant, but upon seeing all belongings in his book bag have been glued with feathers, decides he needs to do something really mean as his revenge. Steve gets a spark of an idea when he sees Carly Beth Caldwell, and her best friend Sabrina Mason outside.

Steve remembers that last Halloween, Carly Beth wore a terrifying mask as revenge for Chuck and Steve's constant torment and attempts to scare her. Now, nothing seems to scare Carly Beth, and Steve decides what he needs is a mask of his own. Steve approaches Carly Beth and questions her as to where she got the mask. Carly Beth tells Steve she doesn't remember, and Sabrina refuses to reveal anything. To get an answer, Steve steals the plaster head Carly Beth has been carrying, and tosses it around with Chuck. Eventually, Carly Beth gives in and tells him she got the mask from the old party store in town. She warns Steve not to go there, and to stay away from the masks. Carly Beth tells the two that the mask she wore that Halloween was evil, and became stuck to her face, controlling her actions. Steve doesn't believe her and laughs off her story. Ignoring Carly Beth's warning, Steve and Chuck decide to go to the party store after he's finished coaching soccer practice.

Upon approaching the store, they discover it is closed. Disappointed, Steve heads home, but not before he sees an opening to the store's basement in a nearby alley. Without a second thought, Steve makes his way down the basement steps. Chuck is reluctant to enter, but eventually joins Steve in searching the basement of the shop. To Steve's joy, he finds boxes filled with party supplies that have not been moved yet. The two search the boxes for leftover masks, and eventually begin pulling out a series of grotesque masks just as terrifying as the one Carly Beth wore. To their shock, the masks are unnaturally warm, like human skin. Steve stumbles upon a disgusting, and foul smelling mask that resembles the face of an old man. It has stringy yellow hair and wrinkled, scabby skin. A single tooth pokes out of a twisted, evil grin, and the hair and ears are crawling with realistic looking spiders. Their search is cut short by footsteps, which sends Chuck running off.

Steve turns to face a mysterious man in a black cape. The man immediately demands to know what Steve is doing here, as the store is closed. Steve struggles to answer, assuring the man that he's not there to steal. Steve tells the man he's looking for a mask, and wants to buy one of the ones he found. The man tells him the masks are not for sale, as they are special, and too real to be worn. Steve pleads, but the man refuses, leading to Steve making a run out of the shop, carrying the old man mask. He and Chuck successfully escape, but Steve decides to keep the mask a secret, hiding it in his jacket.

The following day during his coaching, Steve tells his team that he's planning a Halloween celebration for them. He says he's going to take them trick-or-treating, and to meet him in front of the old Carpenter Mansion. The kids are reluctant, as Carpenter Mansion is said to be haunted, but after some teasing by Steve, they agree. Afterwards, Steve goes back home to try on the mask, and decides he needs to test it out by scaring Chuck, as revenge for him running away from the basement. Steve puts on the mask, and is excited to see the mask looks just as terrifying and realistic as he imagined. Suddenly, the mask grows hot and tightens around his face before melding to his skin.

Steve suddenly starts feeling like an old man. He looks in the mirror and is stunned by how real and gross the mask looks. He tries to reassure himself that it's just an ordinary mask, but is frightened when he hears an old man's cackling. He suddenly feels something grab his leg, and as he turns around, he sees his dog Sparky biting him. Steve tries to reassure Sparky that it's him, but his voice inside the mask sounds like an old man, which scares Sparky, causing him to run away. Steve decides he has to take the mask off, but when he examines the neck of the mask in the mirror, he is shocked to discover that no line exists between the mask and his skin. He desperately tries to pull the mask off, but is unable to remove it. Steve realizes the mask has turned him into an old man, and finds himself too weak to try and scare Chuck. Steve's mother approaches his bedroom door and tells him she brought his favorite black and white cookies. Steve responds in the voice of an old man that he's not feeling well, and shuts himself in his room. He realizes the only person who can help him get the mask off his face is Carly Beth, as she managed to remove hers. Steve calls Carly Beth, and her father picks up. Suspicious at the sound of Steve's voice, Carly Beth's father passes the call off as a prank, and hangs up, despite Steve's pleas.

Steve later falls asleep and awakens Halloween morning. He touches his face and finds that he's no longer wearing the old man mask. As he begins to celebrate, he suddenly wakes up again and realizes that he had dreamed his escape from the mask. Steve decides to tell his parents about the mask, but when he opens his bedroom door, he finds a note from his parents telling him that they went to visit his aunt. Steve makes his way downstairs and begins having cravings that an old man would have. After making breakfast and lamenting his situation, he decides to go through with his plan to terrorize the first graders, then find Carly Beth to help him remove the mask.

On Halloween night, Steve greets his parents, who think he's just wearing an old man costume. Steve's father loves it, but his mother is disgusted, and can't stand to look at it. Steve exits his house, and goes to find the first graders, ready to execute his plan. Steve knows Carly Beth is still his only chance of removing the mask, and decides he needs to visit her after he's done scaring the kids. To Steve's disappointment, the kids are not scared of him, and instead act kindly, even pitying Steve in his old man form. The children help him in getting to Carly Beth's, and at first glance, she turns him away. However, Steve reveals his identity, and Carly Beth stops her ongoing Halloween party in attempts to help him remove the mask.

Carly Beth reveals the mask he is wearing, along with the one she wore, is one of the unloved, a series of lab grown human faces that ended up horrifying rather than beautiful. She reveals the way she removed her mask was through a symbol of love, which for her, was the plaster head made by her mother out of love for Carly Beth. Steve thinks he knows a symbol of love that can remove his mask, and leads Carly Beth to his house to find it. He tells her he's thinking of the cookies his mom specially bought for him. Unfortunately, all of them were eaten by Steve's dog, Sparky. Carly Beth theorizes that it is Sparky, not the cookies, that is Steve's symbol of love. Steve hugs his dog, and to his frustration, the mask remains on his face. Carly Beth realizes that maybe the way of removal for each of the masks is different. The two go back to the party shop in hopes of finding the man in the black cape for help. However, the man is nowhere to be found, and they enter the basement. Looking through the boxes, Carly Beth discovers an old suit crawling with spiders. She realizes the suit must go with the mask, and holds it up. The mask on Steve's face lifts off his head, and joins the suit. The two break into a happy fit of laughter now that the mask is finally removed.

On their way home, the two are scared by Chuck, who wears a purple skinned mask. He reveals he took it the night he ran out of the store, and was hoping to surprise them. Chuck then reveals he has a problem — he is having trouble removing his mask, and needs their help getting it off. 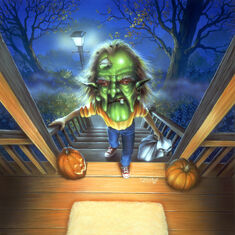 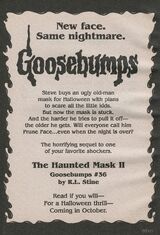 Book advertisement from A Shocker on Shock Street. 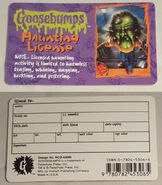 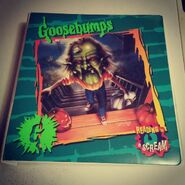 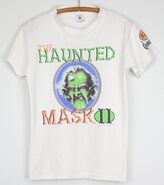