If looks could kill...

Face to Face with a Nightmare...

How ugly is Carly Beth's Halloween mask? It's so ugly that it almost scared her little brother to death. So terrifying that even her friends are totally freaked out by it. It's the best Halloween mask ever. It's everything Carly Beth hoped it would be. And more. Maybe too much more. Because Halloween is almost over. And Carly Beth is still wearing that special mask...

Carly Beth Caldwell is talking about her Halloween costume with her talkative best friend, Sabrina Mason. Carly Beth is a quiet, shy, and overly trusting girl. She is easily scared of almost everything, and repeatedly humiliated by her friends, Chuck Greene and Steve Boswell, at school who call her a "scaredy cat", and delight in making her life a misery. After being tricked by Steve into eating a sandwich that contained a live worm, Carly Beth flees home in shame and vows revenge.

At home, Carly Beth discovers her mother, Kate, has made a perfect likeness of Carly Beth's face from plaster of Paris as a symbol of her love for her. Carly Beth is also annoyed to discover her mother has made her a silly duck costume. Carly Beth goes to her bedroom, where her little brother, Noah, has dressed up in her costume and frightens her. After Carly Beth sends Noah away, she calls Sabrina on the telephone. They talk about the cruel prank Steve played on her and Carly Beth swears she will never fall for one of their stunts again. Then she muses about buying a horrible mask from a new shop that has just opened.

The day before Halloween at a science fair, Carly Beth is once again made a fool of after Steve pretends his tarantula has escaped, knowing full well Carly Beth is terrified of spiders. Steve sneaks up behind Carly Beth and pinches her leg, making it seem as though the tarantula is biting her. Carly Beth runs off in tears, after everyone laughs at her. On Halloween day, she collects her money and sets off for the costume shop, distraught that it is closed. However the mysterious owner of the shop allows her entry and she unwillingly stumbles upon a back room filled with the many of the most hideous masks she has ever seen. The owner refuses to sell her the one she wants. But she is insistent and takes off with the mask while throwing the money to him. Thrilled, she goes home, puts on the mask, and scares her brother. However the mask will not come off at first, when it finally does, Carly Beth and Noah are unsure as to how she unintentionally changed her voice to a hoarse growl. Carly Beth simply remarks, "I don't know...but I like it".

She then makes her way to the front door, stares at the mirror for a second or two, hesitating to put the mask back on, but she does anyways. While putting on the mask for a second time, the mask seems to warp or "suck" itself onto Carly Beth's face. Dismissing the transformation as normal, Carly Beth steals the Plaster of Paris mold of her head that her mother made, and goes in search of Chuck and Steve, determined to make them pay. Yet strange things start happen to her. She acts like a totally different person: she attacks Sabrina, frightens young children, vandalizes the neighborhood.

After finding Chuck and Steve and scaring them however, Carly Beth is horrified to notice that the mold of her face spoke, imploring Steve and Chuck to "help" her. Steve and Chuck run off in fear and Carly Beth gleefully abandons the plaster face. Back at Sabrina's house, Carly Beth tries but cannot remove the mask. Sabrina tugs and pulls at Carly Beth's sweaty mask, but it does not seem to give. To her horror, Sabrina discovers that there is no space between the mask and her skin. The mask has somehow fused itself to Carly Beth's own face. Rather than seeing her own normal eyes staring back at her in the mirror, Carly Beth sees evil, animal-like, orange eyes leering back at her. Sobbing, she returns to the shop where she bought the mask and finds the owner waiting for her, knowing she would come back.

Despite her desperate pleas, the shopkeeper tells Carly Beth over and over that the mask cannot be removed as it is not simply a mask...it is a real, living face. He tells her that he created them and they were once beautiful, but they slowly decayed over time and became hideous, repulsive monsters. He refers to them as "The Unloved Ones". It turns out every so often a young, innocent person like Carly Beth, finds one thinking it to only be a latex mask, puts it on and the mask begins to become one with the victims skin as the mask fuses with them and begins to slowly take over their mind. The shopkeeper says, "The only way to remove the mask is to find a 'symbol of love'. But if the mask is ever put on a third time, it will be forever." As she looks into the mirror and sees the hideous, grotesque face staring back at her, Carly Beth begins to cry out and scream in horror, realizing that she might possibly never see her true, young face ever again.

Unfortunately, Carly Beth's hysterical screams and shrieks begin to slowly awaken the evil masks who before laid dormant, lying in wait for their next victims to consume. They begin floating off of their model heads and start to slowly, but surely, fly at Carly Beth. They pursue her down the street and Carly Beth finally realizes that the mold her mother gave her is a symbol of love she needs to remove the mask from her body. Carly Beth uses it to deter the masks and remove the monstrous face that has attached itself to her. She then returns home to her mother. Once she gets home, she drops the mask by the door and runs for her mother's warm embrace, Noah then appears from the other room to reveal he has apparently put on the mask, and he can not get it off!

The Haunted Mask was adapted into a two-part episode of the Goosebumps TV series. It is the first (part one) and second (part two) episode of season one. 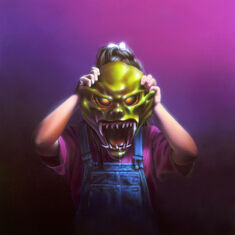 Retrieved from "https://goosebumps.fandom.com/wiki/The_Haunted_Mask_(book)?oldid=124325"
Community content is available under CC-BY-SA unless otherwise noted.