"The Cuckoo Clock of Doom"

"The Haunted Mask" is the first and second episode of season one of the Goosebumps TV series. Part one and part two premiered on October 27, 1995 on Fox in prime time.

The episodes were a major hit upon their debut, gaining over 14 million viewers. Kathryn Long, who played Carly Beth, even received a Gemini Award nomination for "Best Performance in a Children’s or Youth Program or Series".

Steve and Chuck are always doing mean things to scare Carly Beth. Whether it's in the cafeteria or the classroom, they constantly humiliate her in public. Sabrina says its Carly Beth's own fault because she's so "scareable". Well, not this Halloween. It will be such a treat when the trick's on them! Carly Beth will terrify everyone with the amazingly life-like horror mask she got from the creepy man at the novelty store. He warns her not to take the mask, but Carly Beth is determined to shed her old image. Only, what will she do when it turns out the mask has a life of its own?

Chuck and Steve sneak a worm into Carly Beth’s lunch.

Carly Beth puts on the mask.

Carly Beth attacks Sabrina.
Add a photo to this gallery

Carly Beth tries to take off the mask.

Carly Beth discovers the mask has become a part of her.

Carly Beth scares away the Unloved.

Carly Beth takes off the mask.

Noah puts on the mask.
Add a photo to this gallery

1st and 2nd Costumed Boys
Add a photo to this gallery 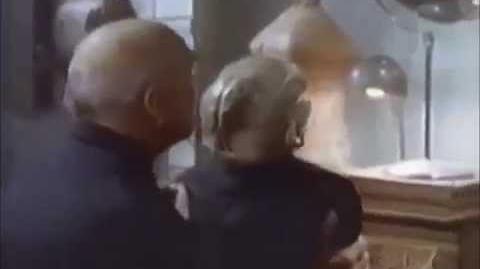 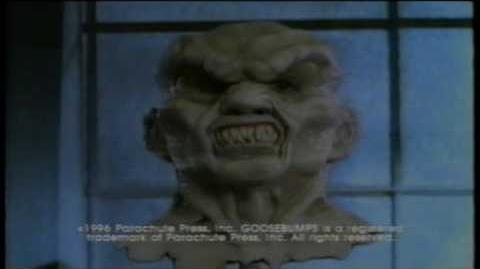 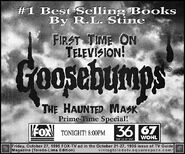 Retrieved from "https://goosebumps.fandom.com/wiki/The_Haunted_Mask_(book)/TV_episode?oldid=151982"
Community content is available under CC-BY-SA unless otherwise noted.