The Haunted Mask is actually one of many, created by a nameless shopkeeper long ago. The shopkeeper had no love for himself, for he was born with an ugly face. As a grown man, the shopkeeper became a scientist in the field of biological engineering and in turn used this to create a beautiful human prosthetic face. He made this face of human flesh and made it so that when he put it on it would attach itself to his flesh and would remain so forever. But something went wrong: when he put on the beautiful Mask it changed, it became hideous. No matter what he did to stop the decay, the face turned into an ugly monstrosity. The face turned a dead green, its teeth grew into animal fangs, and its flesh became contorted and deformed. The shopkeeper did the only thing he could do. Knowing that the face he made was never supposed to be removed, he took a knife and carved deep into the skin where the Mask was supposed to end. This first failed attempt became the Haunted Mask.

After painfully removing the Mask, he tried countless other times to create the perfect flesh mask for him to wear to hide his face. They all failed just the same. It was after his failures that he realized that the reason the masks had failed to remain as they were created was because they changed his outside appearance but not the way he still felt inside: ugly. These feelings in turn were what transformed the faces. They changed to reflect the man he still was on the inside, hideous. The shopkeeper took his failed attempts, dubbing them "The Unloved," and put them on a shelf in the back room of the mask shop that he was still working on setting up, as a reminder of what he was still trying to accomplish. Meanwhile, in this back room of the shop, these living Masks waited and watched for an opportunity to gain a body.

The Mask was purchased by a young girl by the name of Carly Beth Caldwell, whose intention were to use the mask in a revenge scheme against two bullies from her school known as Chuck and Steve, who like to exploit her cowardliness. Sensing her intentions, this suited the mask just fine. Allowing itself to be stolen, the Mask was taken to Carly Beth's home where she tried it on, it was then that the mask began to work its black magic.

Its plan was to slowly take over her body rather than forcefully, as its nature would normally have done. Her will power had been weakened by her dark plan and her conscience blinded by years of torment. Wearing the mask, Carly Beth terrified her younger brother until he was pleading with her to remove the mask, which she did. This angered the mask, as it had not expected her to remove it. It didn't matter, she would put the mask back on. She soon did, and the grotesque mask would have to work faster this time.

After scaring her young brother, which the mask thoroughly enjoyed doing, its host went into the living room of her house to pick up something — a Plaster of Paris head that her mother had made of her. The mask suddenly felt weak. Nothing of any such power had ever kept it from taking over a body it desired (except, of course, the knife the old man had used). She placed the fake head on a stick to make it appear as though she stole her own head, and the mask had to give her credit for her intelligent plan. Wearing the mask, it would look as though a maniac had killed her and stolen her head. The mask basked in the humorous irony for a few moments. Clever or not, though, the head had to go.

After a close call with Caldwell's mother, Carly Beth headed out the door. She used the mask to scare two children she believed were Chuck and Steve. They weren't. Even so, their fear fueled the Mask's power. However, once she and her friend Sabrina Mason met up and went out trick-or-treating, she seemed fine once again until Sabrina's constant chatter about how disgusting the mask was managed to anger Carly Beth and the Haunted Mask, nearly choking her best friend. Realizing her mistake, Carly Beth made up the excuse that she was trying to "stay in character."

With her revenge complete, Carly Beth goes home with Sabrina to take the mask off. However, the mask had attached to her skin and became her face, and was now in full power. Panic-stricken, Carly Beth rushed over to the novelty shop to get help from the shopkeeper. There, she learned the truth about the Haunted Mask, and the shopkeeper told her there could be hope; the mask could possibly be removed with a symbol of love. However, Carly Beth's outbursts awake the other masks, which begin to chase her. Only then she realized she did have a symbol of love: the Plaster of Paris head her mother made for her. After she places it over her head and takes it off, she sees that the Unloved have left, and the Haunted Mask became a mask again, and she tugged it off. Overjoyed, Carly Beth knew that it was now best to be herself. She then returns to her home, where her brother puts on the mask.

The original Haunted Mask doesn't appear in The Haunted Mask II, but it is referenced throughout the book. It inspires Steve Boswell to get a mask of his own from the same shop Carly Beth did. In the television adaptation, the mask is featured much more prominently as the episode's main antagonist.

The Haunted Mask Lives! was never actually written or published, as a result of R.L. Stine's contract ending with Scholastic. It was one of the books planned to be released as a part of the series Goosebumps Gold. The book cover, which was the only thing about the book which was finished, as the plot was unknown, depicted the original Haunted Mask, sticking to a girl's face.

The Scream of the Haunted Mask

The Scream of the Haunted Mask, a Goosebumps HorrorLand book, involves The Haunted Mask arriving at HorrorLand, along with other villains of the series, who want to stop the children who originally defeated them, to stop Carly Beth once and for all.

In the Goosebumps movie, the mask's original wearer, Carly Beth Caldwell (played by Clare Halstead), makes two brief cameos wearing the Haunted Mask. She is first seen all the way on the left of Slappy's newly awakened army in the panning shot. She is later seen gleefully skipping towards the ferris wheel towards the end of the film. Like most of the other monsters in the film, she does not speak.

In the sequel Goosebumps 2: Haunted Halloween, a Goosebumps-themed Halloween mask of the Haunted Mask was one of the costumes brought to life by Slappy.

In Goosebumps: The Game, The Haunted Mask appears as an obtainable item that the player can wear. It can be used to ward off a Beast. Putting the mask on once causes the player to immediately remove it. Equipping the mask a second time causes the screen to slowly become blurry and the game's text to become jumbled. This continues until the game remarks "Your body is unharmed, you're just not in control of it anymore.", which promptly results in a game over. Two in-game achievements can be earned with it. "Heads You Lose!" is attained by taking off the mask, while "My Friends Call Me Monster" is earned by defeating Slappy while wearing the mask.

The Haunted Mask feeds off the evil and fear around it, always ready to cause more mayhem when able, and is at its most powerful during Halloween. It amplifies the wearer's negative emotions and can eventually even take full control of them. As such, the only way to remove the Haunted Mask is by a symbol of love or an act of kindness, which would loosen its control over its wearer enough to be removed. The Mask seems to favor Carly Beth over any other wearer.

The book describes the mask as having yellow-green skin with a bulging, bald forehead. The eyes are a glowing orange, and the mouth is lined with rows of jagged animal fangs.

In the TV episodes, The Haunted Mask is portrayed rather faithfully to this description, retaining greenish skin, a huge heavy brow line, a flat nose wrinkled into a harsh grimace, deformed ears, and a mouth with long thin fangs, that is able to move during speech. As it becomes a real face, a change in appearance is apparent; the skin moistens, and its own black eye color replaces the wearers.

The film's brief appearance retains much of the show's, adding a few features. It further exaggerates the wrinkly grimace with a deeply furrowed brow and crow's feet. The head is larger in proportion and more bulbous, further disconnecting it in appearance from the wearer's own body as a noticeably foreign object. It also adds prominent veins in the forehead, making it appear more fearfully lifelike.

Concept art for the Haunted Mask from Goosebumps.

The Haunted Mask as depicted on a Topps Goosebumps trading card.

Illustration used on the web and for some merchandise. 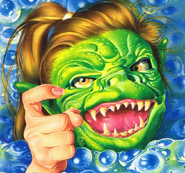 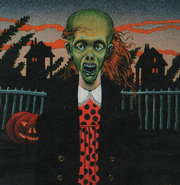 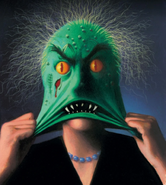 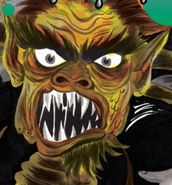 The haunted mask Goosebumps Collectibles figure is second from the left. 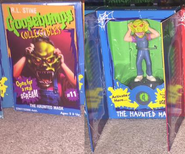 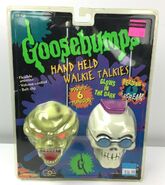 The Haunted Mask and Curly Walkie Talkies in package. 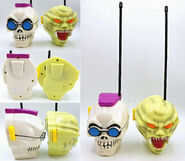 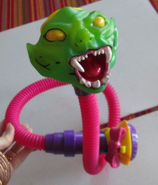 Dread Head (front and back). 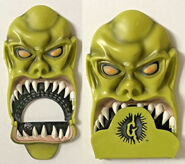 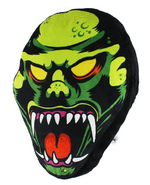 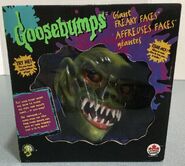 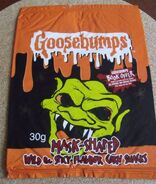 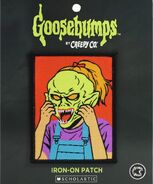 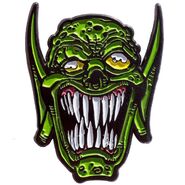 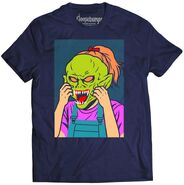 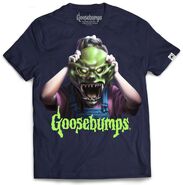 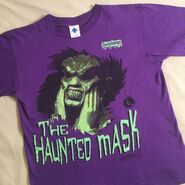 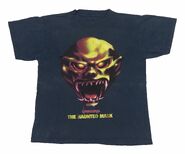 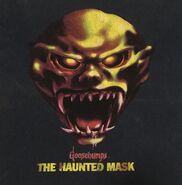 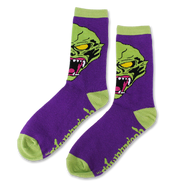 Mask based on the book.

Mask based on the TV series.

Trick or Treat Studios mask based on the book.

Trick or Treat Studios mask based on the TV series. 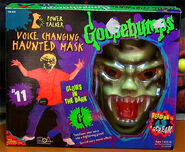 The Haunted Mask as it appears in Goosebumps HorrorTown.
Community content is available under CC-BY-SA unless otherwise noted.
Advertisement